interview with the author of 'unfinished business' 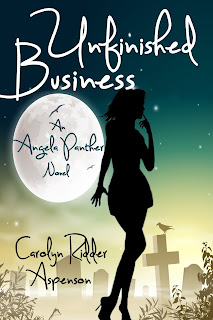 Change the Word: What surprised you most writing your new book?
Carolyn Ridder Aspenson: The fact that I actually finished it.  Well, at first it was that. I started the book two years ago and stopped because it was such an emotional experience for me. Once the book was done, I was shocked that people...people I don't know, who don't have to be nice because they're related to me or I'm married to him or they're my friends, actually liked it.  I'm still pretty shocked about that, actually.

CTW: What's one characteristic you have in common with your MC?
CRA: Rut-roh. I have to pick one? Here's the thing, the main, main character (not the secondary main character who actually steals the book from the main character) is based on me. I'm not bragging or anything, the main character has some serious issues. Plus, she's thinner, taller, a better parent, friend, wife, etc. than me but in general, she's me. I didn't write the book because I wanted to write about myself. I may be slightly vain but my ego isn't that big. (most of the time!) I wrote the book to honor my mother, because after she died, I felt the need to let her voice live on. To do that, 'I' needed to be in the book, too. But each character is a much exaggerated, sometimes better version of the people I know...my kids, my husband, my mother, my brothers. Hopefully none of them will sue me.

CTW: What was the biggest challenge you faced writing this story? How'd you overcome it?
CRA: For me, the biggest challenge in writing this book was to give life to the character of Fran, modeled after my mother, in a way that honored my mom yet showed her fun quirks. I didn't want to be disrespectful. I wanted the people who read the book to fall in love with her character and so far, they have. I'm so glad I was able to bring to live all of the things about my mom that drove me crazy but I adored at that same time.

CTW: What advice would you give other writers getting their start?
CRA: I have a few suggestions, based on my experience. Most importantly, MARKET the living heck out of your book BEFORE you publish it. I'm playing catch up and it leaves little time for eating, showering or sleeping.

Secondly, the most important thing I learned before that was even though other writers have great advice and there are many books about writing, I had to do it my way. I tried other people's ways and it frustrated me. Eventually I figured out I didn't have to do it the way others did and that just because their way worked for them, didn't mean it would for me. When I write, I free write. I have a basic story in my head and I just start typing. Things that happen in my book may be because of something I read the day I wrote the scene, or because of a conversation I had the day I wrote it. I am not an outliner, which surprised me because in general I'm anal-retentive and a big planner.

CTW: What is your favorite book of all time?
CRA: I know I should say something like The Kite Runner or one of the classics but I can't. I am such a book snob and it's embarrassing. I read only a few genres. Chick lit, mysteries and suspense. I have tried a few of Oprah's choices along with major best sellers and have either given up or slept through them. If I were asked to write a book report about some of the books others love, I'd get a big fat F.

To actually pick a favorite is so hard. I have a few favorite writers...my most favorite being the late Robert B. Parker, who wrote the fabulous Spenser series of which the TV show, Spenser For Hire was based on. I love the way he can get such a bang out of so few words. Then there is Harlan Coben who I adore, as well as Robert Crais.  See a trend here? I love men. I admit it. I do think, if I were to pick my most favorite chick lit book of all time, it would be the first Bridget Jones book. I know there have been many others since that was written but it was the book that really brought me to the chick lit genre. Don't shoot me but I've never read Sophia Kinsella. Does that make me a horrible person?

CTW: What are three books on your to-read list?
CRA: Right now I have a Kindle app full of books from Indie authors. I'm currently in pause mode. I'm leaving for a long vacation soon and plan to read while I'm there. I hate not reading now but I have been catching up on the TV show Justified on Amazon Prime and I admit, watching Timothy Olyphant isn't hard work.

On my list I've got Between Boyfriends by Sarka-Jonae Miller, Pickin' Tomatoes by J.W. Bull and Ghost in Trouble by Carolyn Hart. 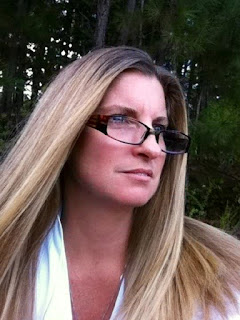 CTW: What literary character do you have a crush on?
CRA: Do I have to pick just one? I can't. I have three. Spenser from the Spenser series by the late Robert Parker, Myron Bolitar from the Myron Bolitar series by Harlan Coben and Elvis Cole from the Elvis Cole series by Robert Crais. I admit I enjoy reading about hot guys who love strong women. Reminds me of my husband. :)

CTW: What literary character do you want to be your best friend?
CRA: Can the guys be my friends? I know it's not easy for men and women to really be friends but since they're not real, is it okay? Other than them, I'd have to say Abby Cooper from the Psychic Eye Series by Victoria Laurie. She's fun and spunky. I like that.

CTW: What's up next for you and your writing career?
CRA: I'm still doing my freelance gig here in the Atlanta suburbs, writing a monthly fitness column for a magazine and newsy articles for five separate newspapers. I also write for a website, www.allmywriters.com, where I do a little gig about a few different soap operas. I'm also currently working on my second book in the Angela Panther series. I'm cautiously optimistic it will be out in December of January.

About the Book
When Angela's mother Fran dies and comes back as a ghost, Angela's ordinary life turns into a carnival show, starring both Angela and her nosy, dead mother.

It seems Fran's got some unfinished business on earth and she's determined to get it done, no matter what.

When Fran returned, she reignited her daughter's long suppressed psychic gift, one she neglected to mention to Angela, and now Angela sees ghosts everywhere.

And they won't leave her alone.

Now Angela has to find a way to keep her old life in tact and help the dead with their unfinished business, all while trying to keep her dead mother out of trouble.

And it's a lot for one woman to handle.

About the Author
Carolyn Ridder Aspenson is the author of Unfinished Business, An Angela Panther Novel.

Carolyn enjoys reading and reads mostly mysteries and chick lit.  She loves to read Harlan Coben, Robert Crais and the late Robert Parker, whom she feels was the ‘most incredible writer ever’.

Married since 1998 to her ‘hottie hubby’, she is the mother of three children, two very old, very high maintenance dogs and a cat who firmly believes she's a dog.