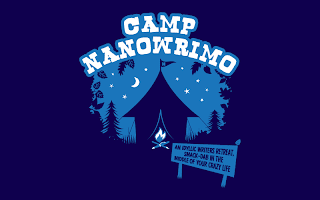 This will be a quick letter from Camp NaNoWriMo. We're at the halfway point, and I'm so busy!

Here's the interesting news: I managed to hit the halfway point goal even after I took a three-day hiatus from writing and fell more than 2,000 words behind!

Toward the end of last week, I unconsciously decided to take a couple of days off from my book to spend with my family. My nephew is only in town for another week, and he comes first when he's visiting for the summer. In addition, I started working on the loveseat I'm refinishing for my outdoor writing oasis (the one I blogged about last Friday). Sanding the wooden loveseat took more than five hours and painting a couple of coats took even more time. While it was fun and somewhat therapeutic work to do, it also left me exhausted.

By the time Sunday evening rolled around, I was beat. I was also more than 2,000 words behind schedule. Figuring I'd still have to make up word count throughout the week, I took my nomadic writing self away from the house and to the bar where my sister works. This is a different one than I used to visit on Sundays, and I've only recently made this a routine again. In the four hours I was there, I not only caught up on my word count, but I gave myself a couple hundred more words of wiggle room.

Here's my theory on how this works. For one, having a couple of drinks while I write puts me in a good mindset. Now, keep in mind I only have a couple, and absolutely no shots. If I overdo it, I'm worthless to my writing. I don't know how Fitzgerald and Hemingway managed to write blasted, because it's not for me. I just want to dance.

The other reason why this works? This is still a slightly new writing venue for me. In addition to lacking WiFi, which was aplenty at the other bar and the cafes I visit, I also don't know all of the regulars as well. But even as I get to know them, they recognize that I'm there working on a book, and they seem to respect that. They're nice and friendly toward me, but they also make sure to give me plenty of room to work until I'm ready to fraternize.

I kept the momentum going strong on Monday night and gave myself a little cushion. I basically took off last night to introduce my nephew to sushi and hit up a candy and soda store (awesome, right?), but that interlude only puts me a couple of hundred words behind. With a couple of hours free between work and Toastmasters, I'll have good time to do some more writing.

More importantly, I'm pleased with the direction my story is taking. I'm not doing as much editing as I go at the moment, but when I take a look back at the end of the month, I think I'll be happy with my results. I'll also have less work to do in the revision arena. (And when I say arena, yes, I'm likening it to the violent place where tributes in the Hunger Games are thrown together to fight to the death. Edits can be Hell.)

Oh, and I gave my main character a new name. I wish I could tell you, but I'm a little superstitious about it -- at least until I finish the first draft. But I love her name -- it might be one of my favorites.

Wow, this update was a lot longer than I meant to go. It's also a little less articulate than I'd probably like, but that's okay by me. Like I said -- I'm not in revision mode at the moment.

I'll be back next week with another update. And be sure to check in tomorrow for not one but two new blog posts. I'll have a preview of tomorrow night's Chick Lit Chat, which I'm hosting, and the debut Little Laura Learns the Ropes post. See you then!