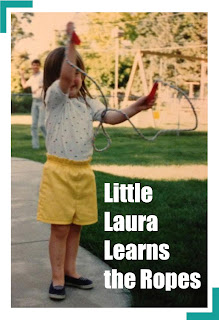 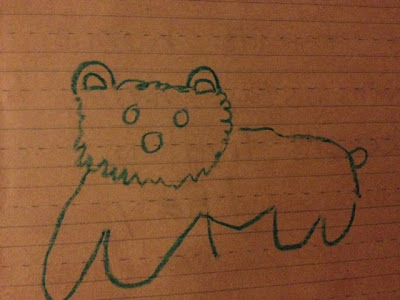 In spring time they leav theri winter den. They climb vary well. They eat honey, fish, roots and berries. If one bear fights for its home who ever wins stays who lost leavs. Most bears live in North America. They don't hear or see vary well by they have good smell.

By second grade, I had a somewhat overachieving teacher (she was still in her first couple of years in the business and terribly sweet). She actually included objectives, descriptions of the activity, a list of strengths and general comments along with both of my second grade samples. She wrote:

Describe Activity: After listening to books read aloud (on bears) and reading some on their own, students wrote what they'd learned about bears.

While I appreciate her kind words about Little Laura's writing abilities, I couldn't help but question her compliments on my editing skills. Oh, sure, my sentence structure is great. And commas, periods and apostrophes appear to be in the correct place. But Little Laura still seems to struggle with her spelling. 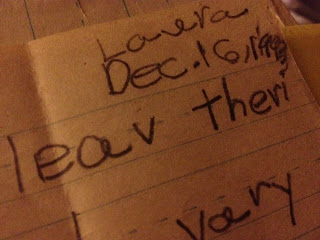 Granted using the appropriate version of their/there is something many people struggle with well into adulthood (have you ever read the comments section of YouTube?). I will give myself props for knowing its was a possessive and it's was a contraction. But vary in place of very? More than once? Seriously, girlfriend, you don't need to use words like "very" or "really." They're essentially a waste of space and tend to detract emphasis rather than enhance it. I suppose you won't learn that until journalism school.

Plus, Little Laura should have recalled the mantra she was taught over and over in first grade: "The bossy 'e' at the end of the sentence goes back to the vowels and says, 'Say your name. Say your name.'" We must have recited that over and over almost as many times as we said the Pledge of Allegiance.

While we're on the topic of patriotism, one small shining moment in this is my proper spelling of America. That's kind of a tough word, isn't it? Again, citing YouTube, a lot of people tend to misspell our damn country's name. 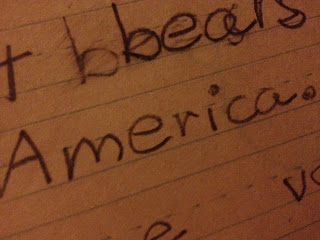 To be honest, even though I know I was prompted by the teacher to write about bears, all I can think about is Stephen Colbert and his frequent mention of bears in his "Threatdown."

And poor Brick worrying about attracting bears with a lady new team member.