Blogger's Note: I'm thrilled to share a look at the new cover for the re-release of Just Friends with Benefits, the debut novel of my good friend Meredith Schorr. I've read Meredith's sophomore novel, A State of Jane, and stayed up till all hours of the night reading her latest, Blogger Girl. (I'll share my official thoughts on that read in my monthly recap, but spoiler alert: I loved it!) Now, I'm excited to dig into the book that started it all. Congrats on your recent writing success, Mer. It's fun to watch it take off. 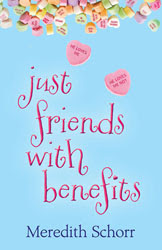 
When a friend urges Stephanie Cohen not to put all her eggs in one bastard, the advice falls on deaf ears. Stephanie's college crush on Craig Hille has been awakened thirteen years later as if soaked in a can of Red Bull and she is determined not to let the guy who got away once, get away twice. Stephanie, a 32-year-old paralegal from Washington, D.C., is a 70s and 80s television trivia buff who can recite the starting lineup of the New York Yankees and go beer for beer with the guys. And despite her failure to get married and pro-create prior to entering her thirties, she has so far managed to keep her overbearing mother from sticking her head in the oven. Just Friends with Benefits is the humorous story of Stephanie's pursuit of love, her adventures in friendship, and her journey to discover what really matters. 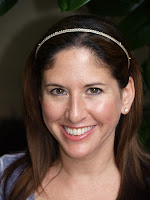 A born and bred New Yorker, Meredith Schorr discovered her passion for writing when she began to enjoy drafting work-related emails way more than she was probably supposed to, and was famous among her friends for writing witty birthday cards. After trying her hand writing children's stories and blogging her personal experiences, Meredith found her calling writing "real chick lit for real chicks." When Meredith is not hard at work on her current work in progress, she spends her days as a trademark paralegal. She is a loyal New York Yankees fan and an avid runner. Meredith has published three novels, Just Friends with Benefits, A State of Jane and Blogger Girl.