If you follow me on Twitter (And if you don't, you really should, because I'm, like, totally clever. Or something.) than you may have seen that I met someone pretty awesome last night. 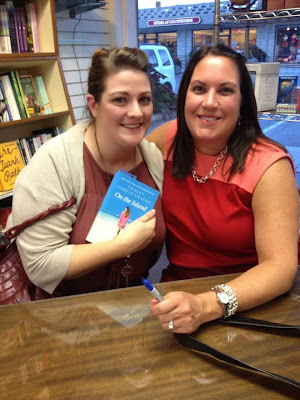 That's right. That's me hanging out with best-selling author Tracey Garvis Graves. With my now autographed copy of On the Island. The book I've been raving about since January.

TGG was at the Bookworm in Omaha, which is about an hour up the road from me, to promote her latest novel, Covet. I haven't dug into this one yet, but it's on my list.

Unfortunately I was a little late to the signing (damn you, traffic), my sister and I still had plenty of time to bask in the awesomeness that is TGG. Here are a few impressions I left the evening with:
I feel a little bad for how much of Tracey's time I stole during my portion of the signing. While everyone else was off buying her book, I was busy gushing about how much I loved On the Island, how awesome I thought it was that she tries different genres and of course telling her about my book (but only after she asked). By the time we got through our portion, there was quite a line! Oh well -- I don't regret having the chance to talk with her. I left our meeting feel so... inspired to keep going.

I'm thrilled I had the chance to meet Tracey. I highly encourage you to stop in to say "hello" to her if she's ever in your neck of the woods. (And she might be. She's on tour.) I'm just glad I saw her Facebook update announcing she was in Omaha yesterday, or I would've missed it. And been mad, sad and not glad.