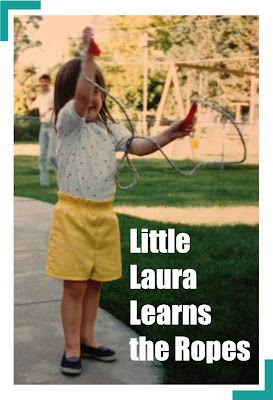 
The Titanic was said to be the finest ship ever built. It was supposed to be unsinkable. It was a beautiful ship. Nothing had ever been used. The beds were all new and had never been slept in.

April 12 the ride was smooth and calm. The 13th was similar.

April 14, 1912 Titanic received seven iceberg warnings. At 11:40 the lookouts see an iceberg dead ahead and report it imidately.

The iceberg hit Titanic on the starboard side. By 11:50 the water has risen 14 feet in the front of the boat.

Orders are given to get as many people into the lifeboats as possible. 1,113 people are estimated to survive.

The Carpathia answers the Titanics distress calls, but, she is 58 miles away from Titanic. Eight distress rockets were fired that night.

At 2:20 a.m. Titanic sank. 1,500 people were left to die in the cold icy water. Only 750 people survived. Most blame this on the fact that they barely filled the lifeboat.

The "greatest ship ever built" sunk that dreadful night. Taking with her 1,500 passengers. This remained a mystery until September 1, 1985, but that is another story. 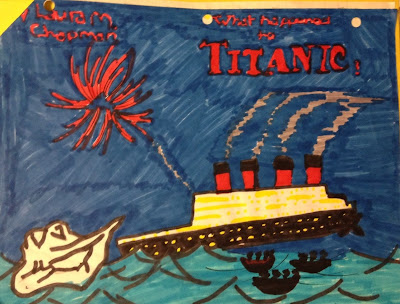 We could talk about Little Laura's misspelling "immediately," lack of comma usage, frequent switch in tenses and overuse of trite sign-offs. But that would be repetitive to what I've written the past couple of weeks. It'd be more boring than this history lesson, and why be boring? No, you want to hear the real story behind this story...

Picture it: January. 1998. James Cameron's Titanic was enjoying a long run as the No. 1 film at the box office. And I, a tween on the brink of puberty had recently acquired a $5-a-week allowance and the right to attend movies without my parents. I'd also discovered that a hot young Hollywood actor named after a painter stirred funny feelings in my tummy.

And so it was, an obsession awoke deep within my prepubescent soul. Between the time the movie was released in December and when it went to the dollar theater, I saw the movie five times. Five times. I've only seen it six times in my life. You do the math.

Yes, like just about every other girl her age, Little Laura developed a mad obsession with Titanic (and an even madder devotion to Leonardo DiCario). And because she was still one year away from discovering romance novels, and couldn't figure out school appropriate way of discussing her feelings for Leo, she wrote about the next best thing: Titanic.

I'm sure it was that or writing an "original" story about a young American artist who liked to paint heiresses like his French girls. Oh, if only Little Laura would've had the balls to write that. The trip to the principal's office would've totally been worth having that story to share right about now.

But no, Little Laura had to stick the facts presented in Titanic and the nonfiction picture book she ordered from the Scholastic magazine.

Little Laura was given a total go-ahead for doing this, by the way. Take a look at the picture prompt the teacher gave the class: 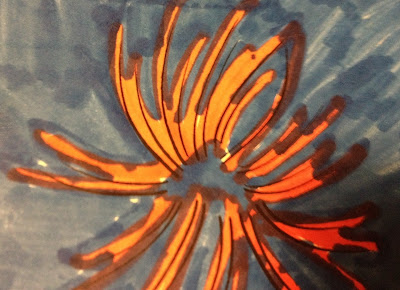 Yeah. Those are fireworks. What else was Little Laura supposed to draw a picture of besides a distress call rising from the sinking ship? Right? I mean, what the heck would you do?

At least this devastating movie prepared Little Laura for future disappointments where love interests are concerned. If you're a fan of Bridget Jones and you've seen any news updates the past few days, you know exactly what I'm talking about. My lady cat, Jane Elizabeth Bennet Chapman, and I are still recovering from the news.

Poor Little Laura. She had no idea how sad her life would one day become. I mean... Darcy. He makes our list of crushable characters. And is part of one of our favorite couples. And is based on one of our literary Valentine candidates.