Blogger's Note: I'm pleased to share this excerpt of Carolyn Ridder Aspenson's Unfinished Business. The first book in the Angela Panther series was a No. 1 best-seller on both Amazon and B&N. It also placed 42 on B&N's top 100 Nook books for sale and 99 on Amazon's top 100 paid kindle books. It placed in the top 10 of three other B&N best seller lists and two of Amazon's. Congratulations, Carolyn. 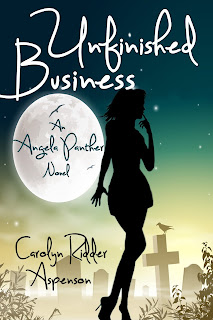 Angela Panther has a perfect life: A lovely home, an attentive, successful husband, two reasonably behaved children, a devoted dog and a lot of coffee and cupcakes. But while her life might border on mundane, she's got it under control. Until her mother, Fran dies-and returns as a ghost. It seems Fran's got some unfinished business and she's determined to get it done.

Now Fran's got some nifty celestial superpowers and isn't opposed to using them to levy a little ghostly retribution on her granddaughter's frienemies and even her own daughter, which doesn't make Angela happy.

While Angela's shocked and grateful to have her mother back, she's not thrilled about the portal to the afterlife Fran opened upon her return. Now every ghost in town is knockin' on Angela's psychic door, looking for help-and it's a royal pain in the butt.

Now Angela's got to find a way to balance her family life with her new gift and keep her mother in line. And it's a lot for one woman to handle.


The air in the room felt frigid and sent an icy chill deep into my bones. Searching for comfort, I lay on the rented hospice bed, closed my eyes, and snuggled under Ma’s floral print quilt. I breathed in her scent, a mixture of Dove soap, Calvin Klein Eternity perfume and stale cigarettes. The stench of death lingered in the air, trying hard to take over my senses, but I refused to let it in. Death may have taken my mother, but not her smell. Not yet.

“You little thief, I know what you did now.”

I opened my eyes and searched the room, but other than my Pit Bull, Greyhound mix Gracie, and me, it was empty. Gracie sensed my ever so slight movement, and laid her head back down. I saw my breath, which wouldn’t have been a big deal except it was May, in Georgia. I closed my eyes again.

“I know you can hear me, Angela. Don’t you ignore me.”

Floating next to the bed, in the same blue nightgown she had on when she died, was my mother, or more likely, some grief induced image of her.

The grief induced image spoke. “Of course I’m dead, Angela, but I told you if I could, I’d come back. And I can so, tada, here I am.”

The image floated up in the air, twirled around in a few circles and floated back down.

I closed my eyes and shook my head, trying to right my brain or maybe shake loose the crazy, but it was pointless because when I opened my eyes again, the talking image of my mother was still there.

“Oh good grief, stop it. It’s not your head messing with you, Angela. It’s me, your Ma. Now sit up and listen to me. This is important.”

As children we’re conditioned to respond to our parents when they speak to us. We forget it as teenagers, but somewhere between twenty and the birth of our first child, we start acknowledging them again, maybe even believing some of what they tell us. Apparently it was no different when you imagined their ghost speaking to you, too. Crazy maybe, but no different.

I rubbed my eyes. “This is a dream, so I might as well go with it."

I sat up, straightened my back, plastered a big ol’ smile on my face, because it was a dream and I could be happy the day my mom died, in a dream and said, “Hi Ma, how are you?”

“You ate my damn Hershey bars."

“Hershey bars? I dream about my dead mother and she talks about Hershey bars. What is that?”

“Don’t you act like you don’t know what I’m talking about, Angela."

“But I don’t know what you’re talking about, Ma.” I shook my head again and thought for sure I was bonkers, talking to an imaginary Ma.

“Oh for the love of God, Angela, my Hershey bars. The ones I hid in the back of my closet.”

Oh. Those Hershey bars, from like, twenty years ago, at least. The ones I did eat.

“How do you know it was me that ate your Hershey bars? That was over twenty years ago.”

The apparition smirked. “I don’t know how I know, actually. I just do. I know about all of the stuff you did, and your brothers too. It’s all in here now.” She pointed to her, slightly transparent head and smirked.

She floated up to the ceiling, spun in a circle, and slowly floated back down. “And look, I’m floating. Bet you wish you could do that, don’t you, Angela? You know, I’d sit but I tried that before and fell right through to the damn basement. And let me tell you, that was not fun. It was creepy, and it scared the crap outta me. And oh, Madone, the dust between your two floors! Good Lord, it was nasty. You need to clean that. No wonder Emily’s always got a snotty nose. She’s allergic.”

“Emily does not always have a snotty nose.” She actually did but I wasn't going to let Ma have that one.

The apparition started to say something, then scrutinized the bed. “Ah, Madone, that mattress. That was the most uncomfortable thing I ever slept on, but don’t get me started on that. That’s a conversation for another time.”

“And I hated that chair.” She pointed to the one next to the bed. “You should have brought my chair up here instead. I was dying and you wanted me to sit in that chair? What with that uncomfortable bed and ugly chair, my back was killing me.” She smiled at her own joke, but I sat there stunned, and watched the apparition’s lips move, my own mouth gaping, as I tried to get my mind and my eyes to agree on what floated in front of me.

“Ah, Madone. Stop looking at me like that, Angela Frances Palanca. You act like you’ve never seen a ghost.”

“Ma, I haven’t ever seen a ghost, and my name is Angela Panther, not Palanca. You know that.” My mother always called me Angela Palanca, and it drove both my father and me batty. She said I was the closest thing to a true Italian she could create, and felt I deserved the honor of an Italian last name. She never liked Richter, my maiden name, because she said it was too damned German.

“And that recliner of yours was falling apart. I was afraid you’d hurt yourself in it. Besides, it was ugly, and I was sort of embarrassed to put it in the dining room.” I shook my head again. “And you’re not real, you’re in my head. I watched them take your body away, and I know for a fact you weren’t breathing, because I checked.”

Realizing that I was actually having a discussion with someone who could not possibly be real, I pinched myself to wake up from what was clearly some kind of whacked-out dream.

“Stop that, you know you bruise easily. You don’t want to look like a battered wife at my funeral, do you?”

Funeral? I had no intention of talking about my mother’s funeral with a figment of my imagination. I sat for a minute, speechless, which for me was a huge challenge.

“They almost dropped you on the driveway, you know.” I giggled, and then realized what I was doing, and immediately felt guilty, for a second.

Ma scrunched her eyebrows and frowned. “I know. I saw that. You’d think they’d be more careful with my body, what with you standing there and all. There you were, my daughter, watching them take away my lifeless, battered body, and I almost went flying off that cart. I wanted to give them a what for, and believe me, I tried, but I felt strange, all dizzy and lightheaded. Sort of like that time I had those lemon drop drinks at your brother’s wedding. You know, the ones in those little glasses? Ah, that was a fun night. I haven’t danced like that in years. I could have done without the throwing up the next day, though, that’s for sure.”

I sat up and rubbed my eyes and considered pinching myself again, but decided the figment was right, I didn’t want to be all bruised for the funeral.

There I sat, in the middle of the night, feeling wide awake, but clearly dreaming. I considered telling her to stay on topic, seeing as dreams didn't last very long, and maybe my subconscious needed my dream to process her death but I didn't. “This is just a dream." I tried to convince myself the apparition wasn’t real.

She threw her hands up in the air. “Again with the dreaming. It’s not a dream, Angela. You’re awake, and I’m here, in the flesh.” She held her transparent hand up and examined it. “Okay, so not exactly in the flesh, but you know what I mean.”

This wasn’t my mother, I knew this, because my mother died today, in my house, in this bed, in a dining room turned bedroom. I was there. I watched it happen. She had lung cancer, or, as she liked to call it, the big C. And today, as her body slowly shut down, and her mind floated in and out of consciousness, I talked to her. I told her everything I lacked the courage to say before, when she could talk back and acknowledge my fear of losing her. And I kept talking as I watched her chest rise and fall, slower and slower, until it finally stilled. I talked to her as she died, and because I still had so much more to say, I kept talking for hours after her body shut down. I told her how much I loved her, how much she impacted my life. I told her how much she drove me absolutely crazy, and yet I couldn’t imagine my life without her.

So this wasn’t Ma, couldn’t possibly be. “You’re dead.”

The figment of my imagination shook her head and frowned, then moved closer, and looked me straight in the eye. I could see through her to the candelabra on the wall. Wow, it was dusty. When was it last dusted?

I shook my head, trying hard not to believe her, but I just didn’t feel like I was sleeping, so God help me, I did.

My name is Angela Panther and I see dead people. Well, one dead person, that is, and frankly, one was enough.


Learn more about the book and stay connected with Caroyln at www.carolynridderaspenson.com, www.facebook.com/unfinishedbusiness and on Twitter at www.twitter.com/awritingwoman.

Email ThisBlogThis!Share to TwitterShare to FacebookShare to Pinterest
Labels: excerpt