Blogger's Note: I'm pleased to share an excerpt of Karen E. Martin's debut novel, Modogamous, with you today as part of her book launch blog tour. Be sure to enter the prize package giveaway by checking out the Rafflecopter at the end of the post. 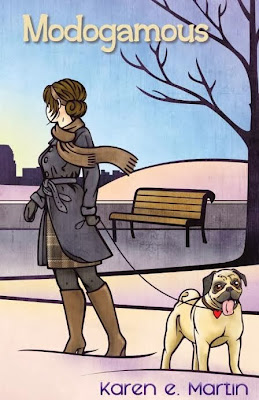 Kate Adams has it all figured out. Five years out of college, she’s got a steady job, a home she loves in the big city, and good friends who always keep her laughing:  her stylish but nosy roommate Evette, happily-married Cecie, and of course, good old Mitch, her seriously cute co-worker who’s been stuck in the Friend Zone since the day they met.

Everything is going just fine—until the night Kate crosses the line with Mitch, and the boundaries between friendship and love begin to blur. Things get even more complicated when hunky JP enters the scene. What’s a girl to do? Add to the mix a spunky little pug Kate never expected to fall for, and her neatly-ordered life is starting to look more like a dog’s dinner.  Maybe her roommate has the right idea after all:  forget the men, and stick with a canine companion instead.

It’s time for Kate to figure out what she really wants in life. But can she dig her way out of the mess she’s created before she ends up permanently in the doghouse?


Have you ever been a bridesmaid? I was for the first time this week. Roomie got married. I suppose I should stop calling her Roomie, since she hasn’t actually lived with me for several months now. Let’s go with Bestie from here on out. So yeah, Bestie got married, and I was a bridesmaid. No horror stories here; it was a relatively painless day. Even the bridesmaid’s dress wasn’t so bad:  a Kennedy Blue “Chloe” style, in a totally acceptable color of plum that didn’t make me want to vomit. (Well, the invoice calls it eggplant, but plum sounds so much nicer IMO.) Floaty, chiffon skirt cut just above the knee, sleeveless vee-neck with straps so you can showcase the girls without worrying about them popping out (which can definitely be a problem with strapless gowns), and none of those horrible cap sleeves. **shudder** It cost less than $150, and I really could wear this one again. It’s a bridesmaid’s miracle.

So Bestie got her fairy tale, and I’m totally geeked for her about it. Really! But here I am, still dating duds. And why is it that every single one of them seems to have a dog? As if I don’t get enough dog talk around the office at The Pup is Up.

Take Jed, for example. Yes, I went out with a guy named Jed. (I know, what was I thinking?) Jed’s your classic redneck:  a ball-cap wearin’, four-wheel drivin’, God-fearin’, momma-lovin’, flag-wavin’, true blue original. Thanks to Jed, I’ve been able to add ‘Redneck Dog-Lover’ to my list of Men Not to Date. The guns, big trucks, and country music, I can handle. The endless, monotonous Nascar, I can endure. I can even choke down Waffle House when it’s absolutely necessary. But Jed’s dog was the straw that broke this camel’s back.

Here’s the thing:  redneck men talk to their dogs. You know those deep and meaningful heart-to-hearts that you want your man to have with you? Well, they have these talks with their dogs. More than once, I walked in on Jed with his arm cuddled around his (admittedly adorable) beagle, Max. Pouring his heart out about this, that, or the other. But the moment I set foot in the room? He clammed up. The third time this happened, I knew I was licked. You just can’t compete with that kind of man-beast intimacy. I even tried luring him away with my best lingerie and a six-pack of Bud. No dice. Dude, if you’re passing up screaming hot monkey sex so you can sit on the porch and talk to your dog, we’ve got a problem here. (That didn’t help my ego much, either.)

Then there was Brandon, the “My Dog is the Only Kid I’ll Ever Need” guy. First of all, oh sure, you say that now, but when you turn 42, you’re going to suddenly realize that, hey, I do want kids, and within six months, you’re going to marry some super-cute girl five or ten years younger than you who will be eternally grateful (for at least the first two years) that she will not die an old maid and will at least have a chance to convert some of those raging eggs of hers into little poop-making miracles with her Uncle Herbert’s nose and your dad’s receding hairline (which, someday, said rugrat will curse you for, fists raised to the heavens, crying out, “Why, oh WHY, was I born into this family of no-hair-having men, dear God, WHY?!?!”)

But as I was saying. Brandon. One of his favorite lines was, “Why would I ever want kids when I have a great dog like this?” Sure, Bentley was cute enough—nice personality, loved to play fetch. And I’m only one year out of college, so it’s not like I wanna start procreating at this very moment. But I do want kids someday, and logically, I have to assume that Brandon is being up-front when he makes these jokes (that aren’t really jokes) about not having kids. And so… sayonara, Brandon!

The silver lining to all these bad dates? At least I’ve been able to dump these guys before they dump me.

What, did I never tell you about the time the man I thought was the love of my life dumped me on the day of our college graduation? Yeah, that was precious. It still warms the cockles of my heart just to think about it. But that’s a story for some other time. For now, I’m off to raise a glass with my gal pals and contemplate why it’s looking like I’ll always be a bridesmaid, and never a bride.


Join the Modogamous Holiday Hop Giveaway to win a fabulous Swag Pack full of prizes! The Swag Pack winner will receive a signed copy of the paperback, tote bag, coffee mug, Christmas ornament, and more! Additional prizes include a copy of the e-book, a signed paperback, and a limited edition, signed art print of the book's cover art. 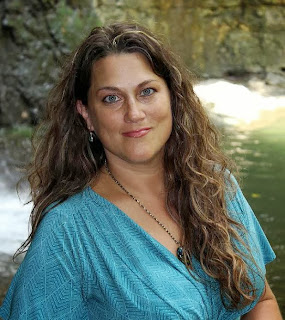 Karen E. Martin, M.Ed. is a full-time freelance writer/editor. She has been in the publishing business since 2004, working on books and publications for major and independent publishers, universities, businesses, and private individuals. Prior to entering the field of publishing, Ms. Martin worked as a Senior EFL Fellow (English as a Foreign Language) for the U.S. Department of State in Romania, a Junior EFL Fellow for the U.S. Department of State in Jordan, and a teacher-trainer for the U.S Peace Corps in Mauritania, Jordan, Romania, and Morocco. Ms. Martin served as a Peace Corps volunteer for two years, teaching English in the Errachidia Province of Morocco. This is Ms. Martin’s first novel.