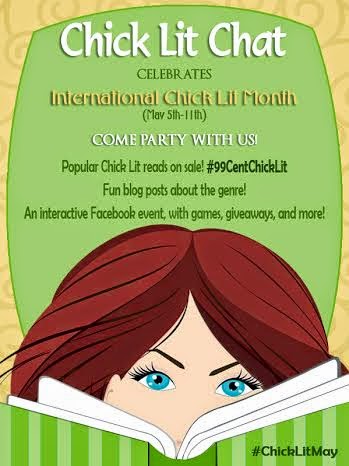 When I picked up a copy of Bridget Jones's Diary in high school at the advice of a friend, I had no idea I was about to embark on one of the longest relationships of my life: a love affair with chick lit. From then on I explored a series of fabulous world created by the likes of Lisa Jewell, Meg Cabot, Sophie Kinsella and a long string of talented authors. It's amazing how much fun you can have in more than a decade thanks to these imaginative worlds.

As part of International Chick Lit Month, I'm sharing my five favorite chick lit novels. While I could play the mom card (And say something like "I don't have a favorite. I love all chick lit equally!"), who are we kidding? We all have our go-to favorites, right? That's not to say I don't like the others lots. I even love them. But... well, you know.

1. Can You Keep a Secret? by Sophie Kinsella 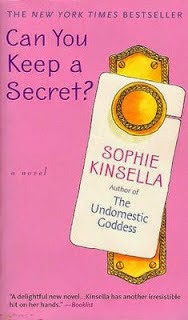 The Gist: Meet Emma Corrigan, a young woman with a huge heart, an irrepressible spirit, and a few little secrets: " Secrets from her boyfriend: "I've always thought Connor looks a bit like Ken. As in Barbie and Ken." Secrets from her mother: "I lost my virginity in the spare bedroom with Danny Nussbaum while Mum and Dad were downstairs watching Ben-Hur." Secrets she wouldn't share with anyone in the world: "I have no idea what NATO stands for. Or even what it is. Until she spills them all to a handsome stranger on a plane. At least, she thought he was a stranger....Until Emma comes face-to-face with Jack Harper, the company's elusive CEO, a man who knows every single humiliating detail about her...

Why I'm mad for it: Sophie Kinsella rarely disappoints when it comes to writing funny books featuring equally quirky and lovely characters. While I'd adored the Shopaholic series, this was the first of her books that I was obsessed with for days, weeks, months... after reading. There's something appealing about the fantasy of an undercover hot boss of sorts falling for you, because he likes you for who you are, not the person you pretend to be to the whole world. Also, out of all the Kinsella heroines, Emma is the one I most related with, because she was trying so hard to be a "better" person, even though she was perfectly fine without finishing boring book club reads or impossible workout schedules. 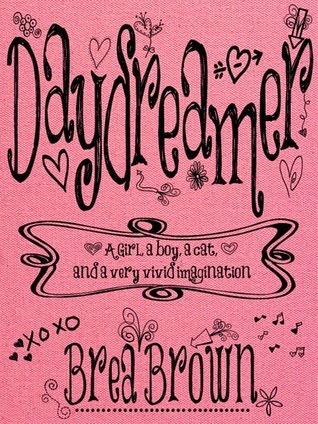 The Gist: Libby Foster prefers her fantasy life to her real life... until she starts to get the two confused, thanks to the new enigmatic architect at her workplace. While she tries to figure out the difference between fact and fiction of her own making, she discovers there's a whole real world out there waiting for her to live it.

Why I'm mad for it: As I wrote in my review, "This book was a complete win from start to finish for me. Fifteen minutes in, my face hurt from smiling and there were countless laugh out loud moments. At the same time, it evoked other emotions ranging from sadness, sympathy, embarrassment, anger and total happiness. I'm channeling my inner Chris Traeger (that's a Parks and Rec reference for those of you who don't know, which makes me sad) when I say I literally laughed and cried as I devoured this book... Everything from the character development to the pacing worked in this book worked. I was in awe of how spectacular this read turned out to be, and can recall few times I've been this gripped with a story."


3. In Need of Therapy by Tracie Banister 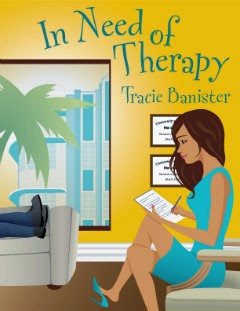 The Gist: Lending a sympathetic ear and dispensing sage words of advice is all part of the job for psychologist Pilar Alvarez, and she’s everything a good therapist should be: warm, compassionate, supportive. She listens, she cares, and she has all the answers, but how’s the woman everyone turns to in their hour of need supposed to cope when her own life starts to fall apart?

While working hard to make a success of her recently-opened practice in trendy South Beach, Pilar must also find time to cater to the demands of her boisterous Cuban family, which includes younger sister Izzy, an unemployed, navel-pierced wild child who can't stay out of trouble, and their mother, a beauty queen turned drama queen who’s equally obsessed with her fading looks and getting Pilar married before it’s “too late.” Although she’d like to oblige her mother and make a permanent love connection, Pilar’s romantic prospects look grim. Her cheating ex, who swears that he’s reformed, is stalking her. A hunky, but strictly off-limits, patient with bad-boy appeal and intimacy issues is making passes. And the sexy shrink in the suite across the hall has a gold band on his left ring finger.

When a series of personal and professional disasters lead Pilar into the arms of one of her unsuitable suitors, she's left shaken, confused, and full of self-doubt. With time running out, she must make sense of her feelings and learn to trust herself again so that she can save her business, her family, and most importantly, her heart.

Why I'm mad for it: As I said in my review, "In Need of Therapy is a laugh out loud story about a fun and somewhat unconventional leading lady. She is sassy and independent, and I loved her from the get go. Pilar's profession alone sets her apart from others in the chick lit genre. She is a therapist, and that role offers plenty of humor and good natured eye rolling... The supporting cast, from her meddling mother to leech of a little sister, offered additional humor, which kept me entertained. Throw in some juicy (in a good and bad way -- I'm looking at you, Victor) men, and you have a great ensemble to keep the story moving. And it moved fast... And when you all read the book can we talk about Ford? Swoon." 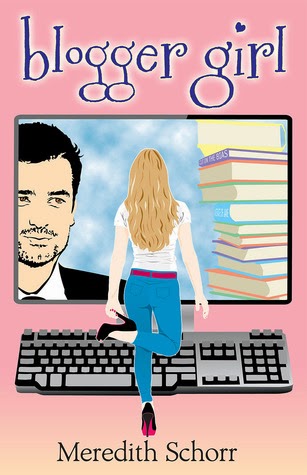 The Gist: What happens when your high school nemesis becomes the shining star in a universe you pretty much saved? Book blogger Kimberly Long is about to ﬁnd out. With her blog “Pastel is the New Black" Kim works tirelessly to keep the genre alive, and help squash the claim that “chick lit is dead." Not bad for a woman who by day ekes out a meager living as a pretty, and pretty-much-nameless, legal secretary in a Manhattan law ﬁrm. While Kim’s day job holds no passion for her, the handsome (and shaving challenged) associate down the hall is another story. Yet another story is that Hannah Marshak, one of her most hated high school classmates, has now popped onto the chick lit scene with a hot new book that’s turning heads—and pages—a cross the land. It’s also popped into Kim’s inbox—for review. With their ten-year high school reunion drawing near, Kim’s coming close to combustion over the hype about Hannah’s book. And as everyone around her seems to be moving on and up, she begins to question whether being a “blogger girl” makes the grade in her off-line life.

Why I'm mad for it: As I said in my review, "Meredith Schorr's Blogger Girl was one of my top five favorite reads of 2013. Fun and witty from the first page, I couldn't put this book down until I reached the end. Filled with plenty of "OMG" moments, lots of laughs and even a few feels, this is a book I would highly recommend to lovers of chick lit. Also, as a blogger girl myself (and former book reviewer), I can say Meredith captured the spirit well."


5. I've Got Your Number by Sophie Kinsella 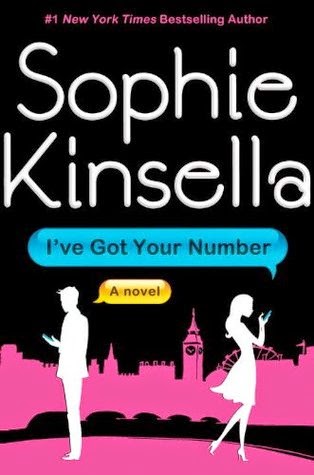 The Gist: Poppy Wyatt has never felt luckier. She is about to marry her ideal man, Magnus Tavish, but in one afternoon her “happily ever after” begins to fall apart. Not only has she lost her engagement ring in a hotel fire drill but in the panic that follows, her phone is stolen. As she paces shakily around the lobby, she spots an abandoned phone in a trash can. Finders keepers! Now she can leave a number for the hotel to contact her when they find her ring. Perfect!

Well, perfect except that the phone’s owner, businessman Sam Roxton, doesn’t agree. He wants his phone back and doesn’t appreciate Poppy reading his messages and wading into his personal life.

What ensues is a hilarious and unpredictable turn of events as Poppy and Sam increasingly upend each other’s lives through emails and text messages. As Poppy juggles wedding preparations, mysterious phone calls, and hiding her left hand from Magnus and his parents . . . she soon realizes that she is in for the biggest surprise of her life.

Why I'm mad for it: As I said in my review: "You know how people say, "I couldn't put it down," when they enjoyed a book? I lived that cliche last night. As a reward to myself for a challenging work week, I ordered I've Got Your Number on my Nook thinking I could read it as a weekend treat. Instead, I read it in one sitting, with a few short restroom breaks. This book will definitely find a place in my permanent collection and my re-read pile. I loved it. I probably throw that phrase out too often with books, but in this case, I sincerely mean it. I have read and adored other stories in the past year, but this one reminded me of why I Kinsella is one of my favorite authors. Even in my least favorite of her books, I always manage to be entertained. But when her stories work, it is Brit chick lit gold."

Well now that I've kissed and told, how about you? What are your favorite chick lit reads?

Wait, there's more! You can pick up these great chick lit books for only 99 cents this week!!!

About "Twelve Drummers Drumming" in Merry & Bright
Newlyweds Tuck and Autumn take a much needed Christmas holiday to Breckenridge, but everything isn't exactly what it seems.

Sip your eggnog, linger under the mistletoe, and make a Christmas wish. Merry & Bright brings you six tales of Christmas cheer, featuring stories of budding romances, Southern charm, lost loves, heaps of humor, and lots of pie by authors Isabella Louise Anderson, Cindy Arora, Laura Chapman, Lauren Clark, Libby Mercer, and Nancy Scrofano. From sunny Los Angeles to the Rocky Mountains to the Deep South, Merry & Bright will take you on a heartwarming adventure you’ll love to visit again and again. Wrap yourself in holiday mirth and prepare to be swept off your feet.

About "Oh Baby" in A Kind of Mad Courage
Rocker Tuck and new wife Autumn return from Chapman’s “Ten Drummers Drumming” (Merry & Bright), now with a baby on the way.

Nineteen authors from around the world were given six weeks or less to produce “a story involving a mother somehow.” The result is a gorgeously eclectic collection of tales that will make you laugh, cry, and truly appreciate the “mad courage” of motherhood.