About Between Octobers by A.R. Rivera 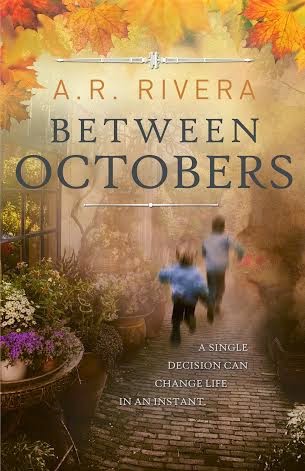 Grace Zuniga, a yearling widow, is convinced she could never fall in love again. She has surrendered to her quiet life on a quiet street in a world that revolves around her two young sons—until the moment she steps into an elevator.

Evan, also known as Rhys Matthews, is a typical Hollywood playboy. He’s used to women falling all over him, but Grace is different. She makes him believe in love at first sight and in himself. She’s thoughtful, beautiful, and intelligent—the opposite of his usual type and the woman he never knew he always wanted.

It’s an ordinary October day when the two meet in an elevator and embark on a romance that is anything but ordinary.

The following October, Grace is living out a normal day until she suddenly finds herself trapped and struggling to get away from a faceless woman. Terrified, Grace can think of nothing but her motivation—her sons, Evan, all the mistakes she thought she had time to make up for, and a love she will give anything to keep. Stumbling through her bleak circumstances, Grace relives the past year and thinks of all that has happened between Octobers.

Giveaway
On June 17, 2014 Take Two Publishing will be releasing their 4th novel, Between Octobers by A.R. Rivera. To celebrate its release, we would like to give one lucky reader a paperback copy! Contest is open to U.S. and Canadian residents only. Good luck!