negativity can go fly a kite

There's nothing like writing the first draft of your first novel. Maybe I'm alone on this, but there's something extra special about that first experience.

When I set out to write Hard Hats and Doormats in November 2010, I'd already tried and failed to write three other novels. Somewhere between doing the research, creating an outline and writing 3,000-5,000 words I'd lose interest or motivation in the project. This was different.

Thanks to the competitive spirit of National Novel Writing Month, I managed to get past 3,000 words, then 5,000 words. I hit a series of other milestones before I reached 50,000 words on November 30. Sure, I had some concerns with the project, but I'd actually managed to write 50,000 words on one project. I cried happy tears that night when my friend submitted the word count to the website for me (my Internet connection was too slow). I was beyond excited when I told my parents and friends about achieving this goal.

Sure, there was a part of me that felt halfway insane from all the feels I had (I told people I was just "in character"), but I was happy and proud.

A few months later, I finished the first draft and cried again. I'd done it. I'd written a full book, and I was sure it was going to be a best-seller one day. I knew it still had plenty of work to go before I ever saw it for sale in a book store, but I believed in my project. I believed in me.

Fast forward a few years and a few complete rewrites, countless editing sessions, lots of beta feedback and many failed queries to agents, editors and publishers. My confidence was slipping. I wasn't sure about the project, and I didn't have a lot of faith in my ability as a writer or storyteller.

After I finally found a publisher for Hard Hats and Doormats I had a brief reprieve in spirit. Having someone else tell you they believe in your project does wonders for the soul. But the positivity didn't last forever.

When you publish a book you're forced to face the reality that not everyone is going to love your baby. Some people are even going to be borderline (or full-out) nasty with their dislike. You can say you won't let negative reviews or off-handed comments bother you. But if you're like me, they do. For years, and even still now, I've told my author friends not to get caught up in the bad, to focus on the good. I've offered encouragement and advice for overcoming the doubt this causes, but I'm not so good at listening to or following it for myself.

It's hard not to take it personally when someone says they don't like your baby. I accept that books, movies and all arts are subjective. But it still shakes the soul.

With one published novel, two published shorts and one completed novel, I should feel better about myself and my writing. But those insecurities never really go away. I'm not sure they ever will. Whenever I sit down to work on my current project, I'm overcome by a wave of thoughts I never had while writing book one.

And those are only the tip of the worries. Lots of "what ifs," and none of them are doing me any good. I'm putting way too much pressure on myself, and it's killing my creative process. It's not helping.

And so, today, in an attempt to overcome my negativity, I'm telling my insecurities to go fly a kite. 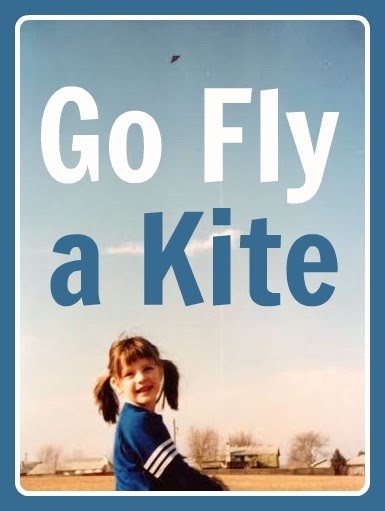 For those of you unfamiliar with the term, Urban Dictionary defines "go fly a kite" as a nice way to say go eff yourself. I first heard the phrase in Juno when, after a particularly heated argument, Juno's step-mother tells her to "go fly a kite." I find this all quite liberating. I mean, I don't know about the rest of you, but I have a pretty difficult time being able to say "go eff yourself" in everyday conversation (I am a lady after all), but that doesn't mean I don't want to express the same meaning.

And yes, that is a photo of Little Laura, flying a kite circa 1989/1990. Look how happy and carefree she seems. (What isn't pictured is the moment about 20 minutes later when LL or her brother--can't quite remember who--got the kite caught in a tree or power line or tree and the fun and games was over. I don't remember if we ever went kite flying again after that.)

But back to what I'm actually telling to go fly a kite...

While I'll never be able to recapture the careless abandon I had when I wrote the first book--kind of like how you can't start a new relationship without bringing the emotional baggage you accrued from the last guy you dated--I can still give it my best effort.

I can still fall in love with characters and a project. I can still want desperately to tell their story. I can and should still come to each day of writing excited to work.

I can still have confidence in my ability to be an author. I can still believe in myself. And I can still have faith that someone, someday will read this book, connect with it and love the characters and story almost as much as I do.

There are no guarantees in life or publishing, but you have to keep your faith.

I'll send you off with a little song, which kind of takes on a whole new meaning for me after writing this post.

What's something you'd like to tell to "go fly a kite"?