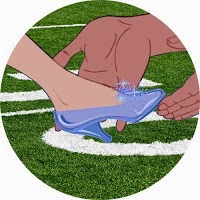 I mean, I can't completely complain. The Cinderella's Fellas did in fact win their first game of the season, becoming 1-1. I had good showings from Peyton Manning (27.58) and LeSean McCoy (18.2), but several of my team members--I'm looking at you wide receivers--left something to be desired.


Yeah... So I may have sang the praises of my wide receiver core a little too loudly last week. None of them did well on either of my teams. I'm still a little weepy after their performances across the board.

And with Jamaal Charles's high-ankle sprain sustained in the first quarter of the Chiefs-Broncos game, I'm feeling like my first-round pick for the Lady Chapmans was a bad call on my end. It's no wonder we're 0-2, now.

That said, I had a few shining pockets of excellence. The probably love of my life Aaron Rodgers scored an impressive 28.64 points. This after nearly giving me a heart attack by fumbling the ball on his first possession of the game. But no, like a true prince among men, he moved past that faux pas and right into my waiting heart.

Still... much as I'd like to award this week's glass slipper to my loves Aaron or Peyton, there are two other men who really stepped up and went above and beyond to prove how much they care about my quest for the throne.

That's right, I said two other men. My Fantasy Football Prince Charmings of the week are...

In the Packers' comeback win over, Mason made three filed goals to keep my boys on the clock, including one from more than 50 yards away. Throw in his point after attempts, and Mason scored 13 points for the Lady Chapmans. If that isn't charming, I don't know the true meaning.

My kicker on Cinderellas Fellas was almost as impressive. Despite playing for the butthole Cowboys (I would say I'm sorry for my Cowboys hating, but... sorry, not sorry) Dan made three field goals, plus his point afters and gave me 19 points, which helped me win.

I don't know if that's the slight fever accompanying this cold or his outstanding slaying of dragons this week, but I'm all kinds of hot. And maybe even bothered. (Again, it could be that I'm bothered he plays for the Cowboys, a team I was taught to dislike from an early age. I'm so confused)

People who say kickers don't count for much in Fantasy Football obviously haven't experienced what I did this week. They can be real buddies when they put their minds to it.

Now... if you'll excuse me, Miss Laura needs to go get some rest, hydrate and dream about what potential victories may come ahead for her band of merry men in week three...


Not on Twitter? Miss some of my totally amazing commentary from NFL Week Two? Check out the highlights: