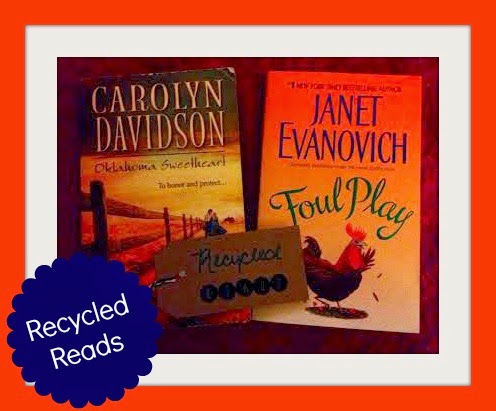 I've gone and acquired too many books again. I know what you're thinking: "Is that a real problem?" Well, when you live in a small one-bedroom apartment and are terrified of becoming a hoarder, the answer is "yes."

In an attempt to avoid my greatest fear of ending up buried under a pile of old newspapers and books, I'll be giving away "Recycled Reads" every other week through the end of the year.

Entering to win is easy. Just use the Rafflecopter below. I'll randomly select one recipient, and you'll get the books. No purchase necessary to win. Must live in U.S. or Canada. For the biggest amount of entries, share the name and title of your favorite romance novel of all time. And that's it. See? Super easy!

Now to discuss the books up for grabs this week, which I'm calling the "Lots of Love" package, because they feature stories with... lots of love. And chickens, now that I think of it. Hmm. Now I'm disappointing. I should've called this the "Cluckin' Love" package. Sigh.

The fact that Loris Peterson was carrying another man's child should have been enough to make Connor Webster despise her. But instead, he'd made her his wife!

Some said that she had betrayed him. But Connor's fierce passion for Loris moved him to rescue her from an uncaring family — and protect her from a mysterious enemy!


When Amy Klasse loses her TV job to a dancing chicken, handsome veterinarian Jake Elliott rescues her with an offer to be his receptionist. Jake just can't resist a damsel in distress, and Amy certainly doesn't mind Jake's charming sincerity.

Then suddenly the job-stealing chicken disappears and Amy is suspected of foul play. Amy and Jake search for clues to prove her innocence. But will Jake be able to prove to Amy that love, too, is a mystery worth solving?


Good luck! And thank you for helping me do a little house cleaning to make room for some new books.