After my (contracted out) apple picking adventure in Nebraska City, I've become a bit obsessed with the idea of having a perfect fall dinner. It must be part of my annual nesting process--the same thing that has sent me to a craft store a few times in the past week. Or it might have to do with the two bottles of apple wine I scored during my apple festival wine tastings.

My sister and I drank the first--a bottle from the Kimmel Orchard & Vineyard, where I also acquired apple butter, apple donuts, freshly picked apples, cinnamon pecan honey, and probably five pounds of belly fat-during the Nebraska football team's win over Illinois. That was good and fine, but for the second bottle I demanded a perfect fall feast.

Can you imagine it? A homemade squash soup and fall-ish salad to start. Pumpkin ravioli or lasagna--with homemade noodles--next. All finished with apple crisp or pumpkin pie. Maybe I'd go foraging for acorns, because doesn't that sound festive?

Only, that's easier said than done. I don't know about the rest of you, but I find it pretty difficult to cook a full dinner from scratch on a weeknight. I'm all about the cooking and baking on Saturdays and Sundays, but something about sitting in an office for eight or nine hours kills my cooking drive.

In the end, my lack of patience and tiredness won out and I phoned in my fall feast last Thursday.

My sister and I started our meal with an arugula salad topped with dried cranberries, almonds and a homemade apple cider vinaigrette. I actually put all of this together myself, but before you get two excited, it took about sixty seconds. 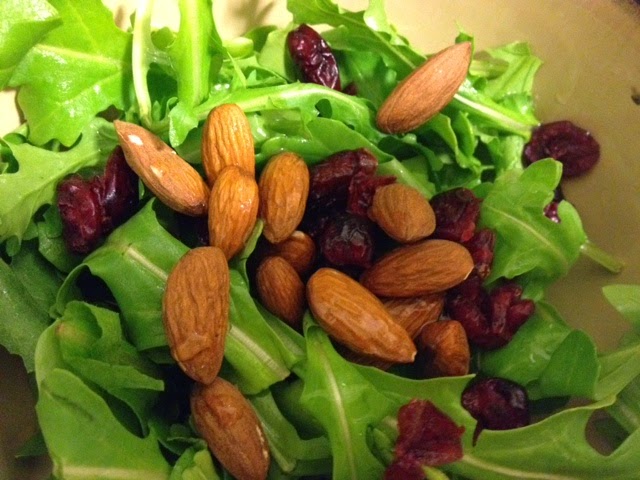 For our main course, we had butternut squash ravioli, sweet potato gnocchi (yah, yeah, two starches, but I couldn't decide), and sun-dried tomato tofurkey sausage. All courtesy of Trader Joes. I topped the ravioli with a browned butter sauce, which was browned butter with a pinch of pumpkin pie spice (I burnt it a little. Whoops). 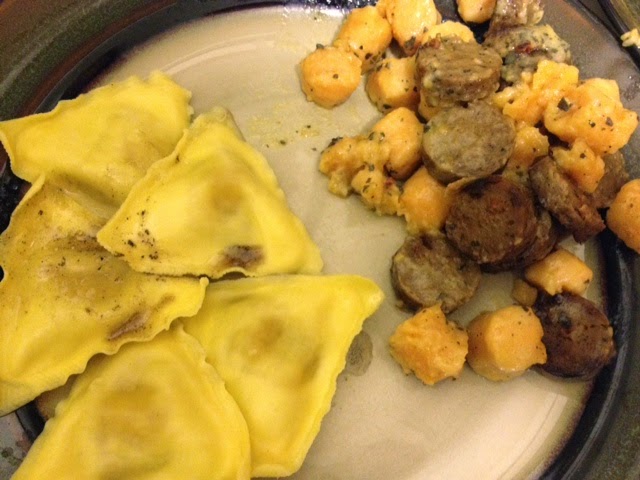 We 86-ed including any more vegetables in this meal, which would've been awesome, but I was feeling pretty tired after the ten or so minutes it took to prepare all of this.

Instead, we finished off our meals with the bottle of apple wine from Mac's Creek Winery & Vineyard of Lexington, Nebraska, and some inside out carrot cakes (which look like Whoopie Pie) also from Trader Joe's while we watched the Packers defeat the Vikings. We also did some hard-core crafting, but why wouldn't you?

All in all, it was a lovely, no-fuss fall meal. Even if it was the faster approach.

What would you include in your fantasy fall meal?