Day 8: I Am Having So Much Fun Here Without You
By Courtney Maum
Published June 10
Picked by Whitney 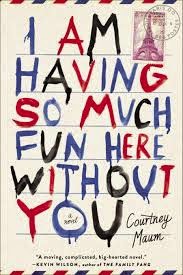 In this reverse love story set in Paris and London, which Glamour hailed as one of the “10 Best Books to Add to Your Summer Reading List Right This Second,” a failed monogamist attempts to woo his wife back and to answer the question: Is it really possible to fall back in love with your spouse?

Despite the success of his first solo show in Paris and the support of his brilliant French wife and young daughter, thirty-four-year-old British artist Richard Haddon is too busy mourning the loss of his American mistress to a famous cutlery designer to appreciate his fortune.

But after Richard discovers that a painting he originally made for his wife, Anne—when they were first married and deeply in love—has sold, it shocks him back to reality and he resolves to reinvest wholeheartedly in his family life…just in time for his wife to learn the extent of his affair. Rudderless and remorseful, Richard embarks on a series of misguided attempts to win Anne back while focusing his creative energy on a provocative art piece to prove that he’s still the man she once loved.

Skillfully balancing biting wit with a deep emotional undercurrent, this “charming and engrossing portrait of one man’s midlife mess” (Elle) creates the perfect portrait of an imperfect family—and a heartfelt exploration of marriage, love, and fidelity.

So often we see the traditional love story of boy meets girl, they fall in love, they get married and have kids and live happily ever after. But these things are much more complicated than that, and that is what Courtney Maum explores in I Am Having So Much Fun Here Without You. (Hereafter referred to as “the book,” as while I love the title it’s awfully long to type.)

The book is a compelling story with interesting characters and humor, and it felt very real to me, like the characters were people I knew instead of a character in a book. And by looking at what marriage, parenting, and creating an identity for oneseself can do to (and I would even say for) a couple, the love story is there, even if it is unexpected.