Day 9: Every Time I Think of You
By Tracey Garvis Graves
Published September 16
Picked by Laura 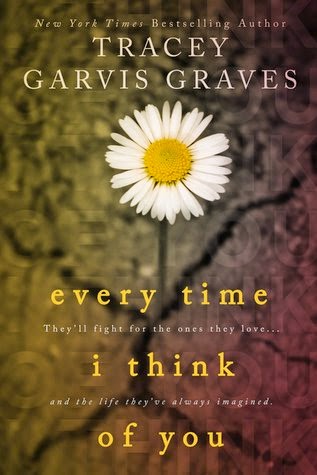 Thirty-year-old Daisy DiStefano has two people she holds dear: the grandmother who raised her, and her three-year-old son, Elliott. But when Daisy’s grandmother is killed in a seemingly random act of violence, Daisy must take steps to protect herself and her child.

Despite a thriving career in San Francisco, thirty-six-year-old Brooks McClain has returned home to spend what little time his mother has left before she succumbs to the deadly disease that is ravaging her. The seasoned investigative reporter has taken a position with the local newspaper and been on the job less than twenty-four hours when he’s summoned to cover the death of Pauline Thorpe.

Brooks is all business, but the more time he spends with Daisy DiStefano, the more invested he becomes; there’s something about a single mother, a defenseless child, and an unsolved crime that has stirred Brooks’s protective instincts like nothing ever has before.

And when the unthinkable happens, Brooks will do whatever it takes to clear the name of the woman he’s fallen for and the child he’ll protect at any cost.

Romantic and suspenseful, Every Time I Think of You shows how far two people will go to fight for the ones they love, and the life they’ve always imagined.

It's no secret Tracey Garvis Graves writes well--superbly so--and she lived up to her reputation with Every Time I Think of You. Character-driven and expertly crafted, I found myself wishing I could read and flip the next page faster to get to the end.

From the onset, I was drawn to Daisy and Brooks, the main characters who tell most of the story. They are both hard-working, family-oriented individuals who face hard times, sometimes make the wrong decisions, but make every choice with the intent of doing well. I so desperately wanted these two crazy kids to be together, because they were exactly what the other person needed to survive and live to their fullest potential.

Garvis Graves also continues to impress with the amount of research and attention to detail she gives. As a former reporter, Brooks's actions, lines of questioning and written products were spot-on. The depictions of ALS, and even meth addiction and peddling, were developed so completely I felt like if stepped into and episode of a hospital drama or Breaking Bad, which I loved.

Though not as steamy as some romances or nail-biting as some thrillers, there was enough toe-curling passion and page-turning intrigue to keep my interest piqued from page to page. This story had enough interesting and relatable elements that it didn't need gimmicks to work.

What made this book all the more exciting for me was the fact that I went to see Tracey speak while she was still in the developmental stages of working on this book. She offered a few bits about what we could expect, and I eagerly anticipated the moment I would finally get to read this story. It didn't disappoint.