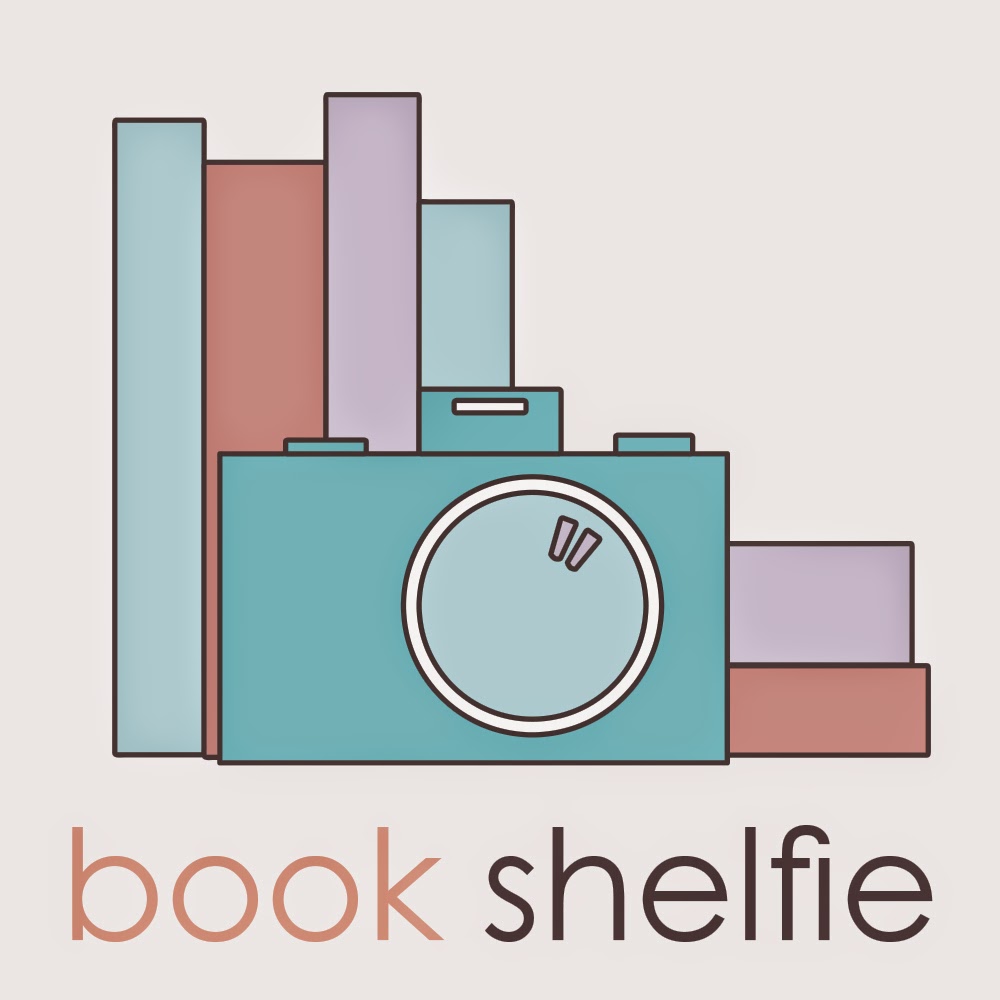 Blogger's Note: I've organized my books with Dewey Decimal Classification since I learned what it was in from my elementary school librarian. I recently borrowed a page from Pinterest and went with a new scheme--by color--to spice up my literary life. To commemorate the occasion, I'll offer a glimpse of each shelf and what the books and decorations mean to me. 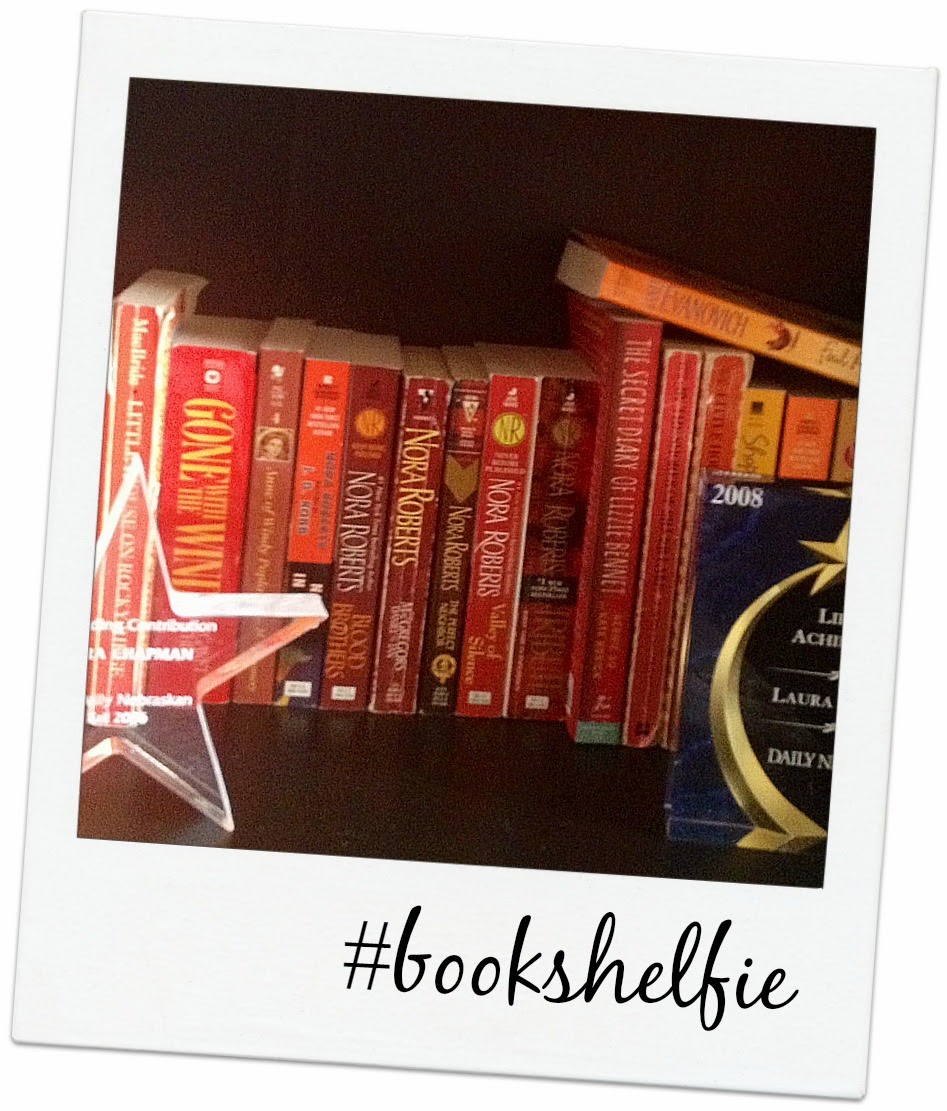 You by Caroline Kepnes - I received a copy of this book this fall via Klout. It looks like it should be a little scary--or at least thrilling--but I plan to read it at some point.

Mini Shopaholic, Remember Me?, and Shopaholic Takes Manhattan by Sophie Kinsella - I'm a big fan of the Shopaholic series, and these two books fall somewhere in the middle of my favorite or least favorite. As for Remember Me?, it's probably the Sophie K book I loved most. Oddly enough it sat on my bookshelf for a year or two before I ever cracked it open.

Little House on Rocky Ridge by Roger Lea MacBride - After devouring the Little House series as a little girl, I moved on to the auxiliary books authored by others. I read this and the second book in the series, but lost my steam. I guess I just didn't connect with Rose as a protagonist in the way I did Laura. Probably because she didn't have my name. (I can be a vain, fickle reader.) This book does hold the distinction of being the subject of my first official book review (which was featured in this Little Laura post).

Gone with the Wind by Margaret Mitchell - Oh boy. I'm worried about the hate mail I'm going to get with this, but I'm just going to say it. I didn't particularly care for this book, and I thought the movie was better. I don't fault anyone else who loves this book--that's totally your call, and I respect it--but I just remember being so frustrated while reading this ginormous book, because it took forever and it seemed like most of the really good parts were in the movie, which I could just watch in a fraction of the time. Again, I appreciate that this book is considered a classic by most, but it mostly stays on my bookshelf just so I can prove I read it, not because I have any plans to repeat that feat.

Anne of Windy Poplars by L.M. Montgomery - Not one of my favorite Anne of Green Gables books, but still part of the series, this one tells the story between when Anne and Gilbert get engaged and when they finally tie the knot. I'm a romance junkie, so I actually was pretty impatient the whole time I read this book, because I just wanted Anne and Gil to get married and have some babies already!

Naked in Death by J.D. Robb - So far this is the only J.D. Robb book I've read, but I promise to do better someday.

Blood Brothers, The MacGregors: Daniel and Ian, The Perfect Neighbor, Valley of Silence, and Tribute by Nora Roberts - Who, red looks good on you Nora. I mean, for real, girl, these are some of my favorite of your books. Particularly Blood Brothers, the first book in the Sign of Seven series, which I stayed up late on school nights to read, because I was so into them. Valley of Silence is my favorite in the Circle Trilogy, Tribute is probably a top-five standalone novel and the remaining two are part of the MacGregor series, which will forever be one of my favorite romance series.

The Secret Diary of Lizzie Bennet by Bernie Su and Kate Roric - I loved the web series, and I ordered this book as a 28th birthday present to myself. With any luck, I'll finally give it a read before my 29th birthday rolls around in June.

By the Shores of Silver Lake and Little House on the Prairie by Laura Ingalls Wilder - Oh, Laura Ingalls Wilder. How do I love thee. Let me count the ways... Actually, it's been a LONG time since I read either of these books (my go-to Little House re-reads are still The Long Winter, Little Town on the Prairie and These Happy Golden Years, because I'm an Almanzo Wilder fangirl). But my friend Whitney and I will be re-reading the whole series at some point during the next 17 months as part of our new collaborative blog. 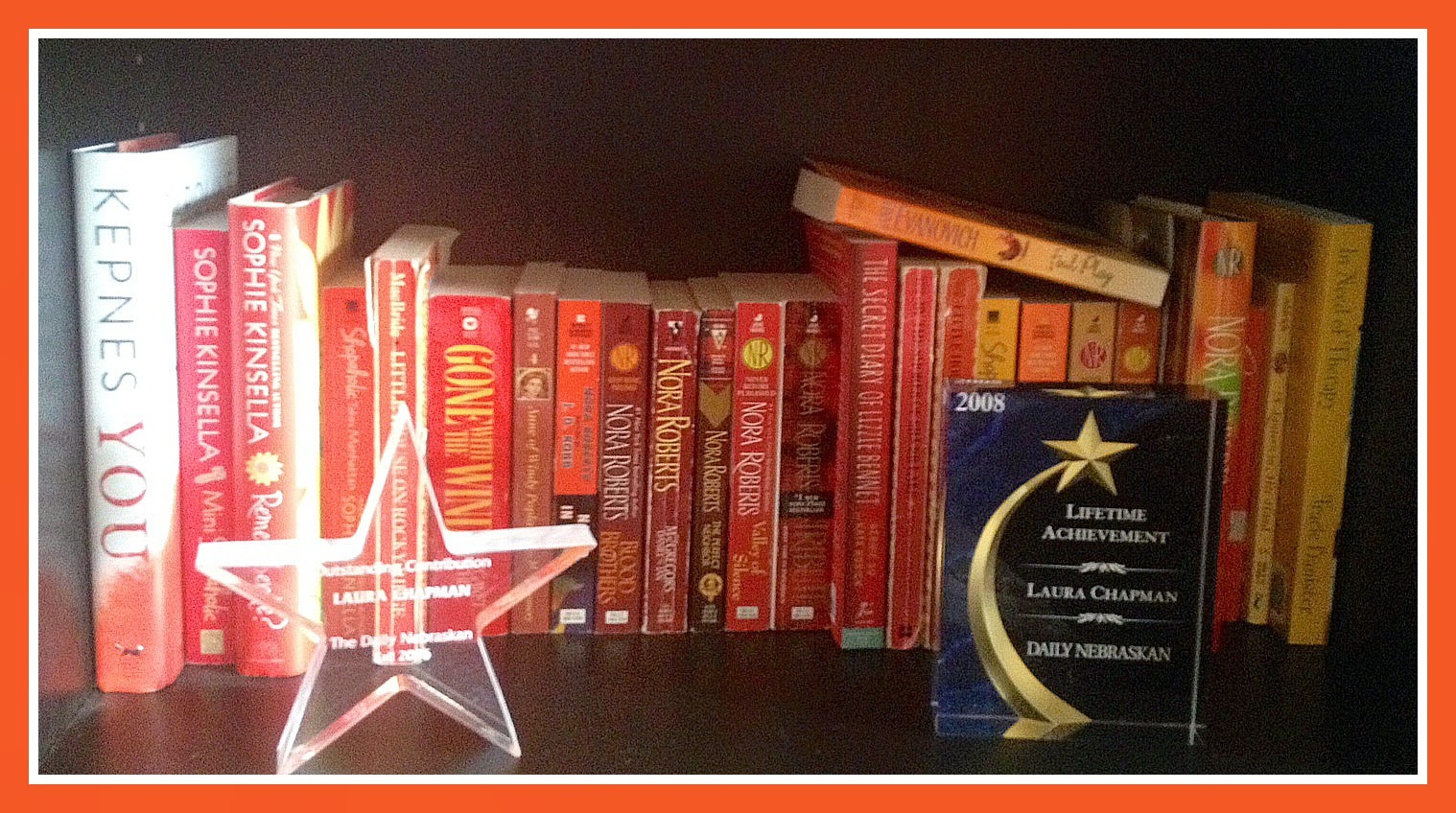 Foul Play by Janet Evanovich - Confession: This is the only Janet Evanovich book I've ever read, and it's one of her first (potentially published under a different name). It's actually super adorable and a fast read (I found myself re-skimming it over the course of an hour a couple of months ago). I was pretty hot for the doctor (veterinarian) love interest in this story.

Shopaholic and Sister by Sophie Kinsella - This is my least favorite Shopaholic book to date (though I should say I haven't read the two most recent). I don't know, I had a lot of anxiety reading this book, which is good storytelling on Sophie's part, but bad on my poor nerves. (Said like Mrs. Bennet.)

Vengeance in Death by JD Robb - I haven't read this one yet, but I will! I purchased the first five JD Robb books a couple of years ago, deciding it was about time I put a ring on that series, but with so many books in my to-read list, I just haven't made it to this book yet.

Dance of the Gods, The Pagan Stone, Red Lily, and Stars by Nora Roberts - Get used to seeing a lot of Nora Roberts on my bookshelf. To paraphrase my friend Whitney's admiration for Emily Giffin, I worship at the alter of Nora Roberts. That said, with the exception of The Pagan Stone, which is part of the Sign of Seven trilogy, which is one of my absolute favorites, I have lukewarm feelings about the rest of the Nora books in the orange category. Still, I'll forever say that I enjoy an okay Nora Roberts book any day of the week and twice on Sundays.

A Lantern in Her Hand by Bess Streeter Aldrich - Written by fellow Nebraskan Bess Streeter Aldrich, this book was a recommendation from my fifth grade teacher who knew how much I'd adored the Little House series. I initially read it as a diff reading assignment and made it my project (complete with giving a presentation in my grandmother's prairie woman dress and bonnet from the Nebraska Centennial in 1967) this book will always have a special place in my heart because of the school memory and the Nebraska connection.

In Need of Therapy by Tracie Banister - I'm fortunate to call Tracie Banister a friend, and it's with pride that I have INOT on my bookshelf. I met Tracie back in my book reviewer days when she gifted me with a free digital copy of her book. I fell in love with it (you can read my review here) and so I had to have a print copy for myself. A clever, witty, and well-crafted story, this was one of my favorite reads of 2012. Tracie also has a new book out called Twin Piques, and I'm also a big fan of her debut novel, Blame it on the Fame (read my review here).

This shelf also contains the only two trophies I've received in my life. Both known as "Acrylic Star Awards," they are passed out each semester by the Daily Nebraskan staff. The first is known as the "Outstanding Contributor" award, given to a person of any job title for doing what is deemed as outstanding work (it's not just a clever name, right?). The second is a "Lifetime Achievement" award, given to a graduating senior (or in my case, three graduating seniors).

Both awards meant a great deal to me, because I received them from my peers. I know you shouldn't live your life waiting for awards or other people to validate your work, but it does feel nice when it happens.