Lizzie Hart is back—snooping, lying, and chick-fighting to uncover the truth, hoping not to break any hearts along the way…especially her own.

That Old Black Magic…will it put Lizzie under its spell?

To celebrate the release of Caroline Fardig's latest Lizzie Hart mystery, I invited Caroline to visit Change the Word to play a round of Five Questions. Caroline is also holding a giveaway in conjunction with the release, so be sure to read all the way through to the end for details on how to win a fabulous prize. 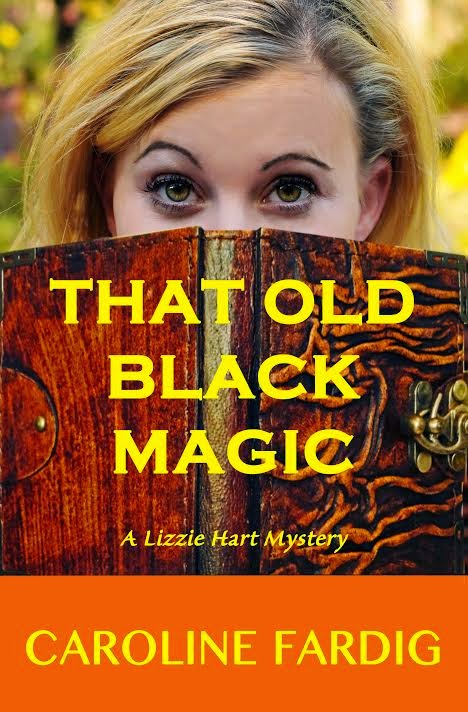 Change the Word: Who is your favorite supporting character in this book?
Caroline Fardig: My favorite is Brad.  He has a very small role, and I didn’t even bother to give him a last name.  However, his dialogue was the most fun to write.  I had to put on my “jerk” hat for that one.  I also got to use the Urban Dictionary extensively.

CTW: What was the biggest lesson you learned between writing your first book and this one?
CF: I think it was how to have a better flow to my writing.  I wrote my first novel years ago, and I’ve written several since then (yet to be published), so I think it’s a matter of practice and experience.  I’m much better with grammar and sentence structure now.  I don’t have to look up as many writing rules anymore!

CTW: When do you find yourself most inspired as a writer?
CF: Sometimes inspiration strikes suddenly.  I’ll just be daydreaming while doing something else and a situation will pop into my mind that would be great to use in a book.  Other times, I consciously sit down and try to come up with new ideas.  Being a musician, I’m also often inspired by music.  Sometimes I turn the music on, sit back, and let the ideas flow.

CTW: Where do you do most of your writing?
CF: My office.  I have a lovely office at home filled with artwork made by my daughter and me and other pieces that have special significance in my writing.


CTW: Why should everyone drop what they're doing and pick up a copy of the book this second?
CF: That Old Black Magic is the most fun you’ll have all day.  There’s a zany cast of characters, and Lizzie Hart is, as always, getting herself into messes.  As a bit of a change from It’s Just a Little Crush, this book delves deeper into what makes Lizzie tick. You’ll laugh with her, you’ll cry with her, and you may just find out her deepest, darkest secret.


About That Old Black Magic


Lizzie Hart hoped her first day back at work after nearly being killed would be uneventful.  No such luck.  Before she can finish her morning coffee, Lizzie and her co-workers find a dead body on the rooftop of their office.  Media vultures that they are, the Liberty Chronicle employees are psyched to have first-hand news to report.  Lizzie, however, is devastated when she realizes that the victim is her ex-boyfriend’s brother.

When evidence begins piling up against one of Lizzie’s friends, she reluctantly dons her detective hat once again, determined to find the real killer.  She’s not thrilled about chasing another psychopath around, but she’ll do anything for a friend.  Lizzie’s love life is rapidly becoming a hot mess, too.  Her latest attempt at sleuthing isn’t leaving much time for her budding romance with town hunk Blake Morgan.  Add that to the fact she’s hiding a secret so big it could rock the very core of their relationship, it’s no wonder that Lizzie’s in a tizzy.

Poor Lizzie ends up juggling a murder investigation, a wacky Wiccan coven, and two men vying for her attention—all while nursing injuries left over from the last time she decided to play Nancy Drew.  It’s a good thing she always has a few tricks up her sleeve.


Buy the Books
In honor of the release of That Old Black Magic, It's Just a Little Crush will be on sale for $0.99 the first week of February!