My funny and talented friend Romi Moondi has a new book. After penning the hilarious Year of the Chick series, she's back with a novel-sized travel guide written from her experiences living in Paris. Romi was good enough to stop by the blog today to play a round of "Five Questions" about her new release. 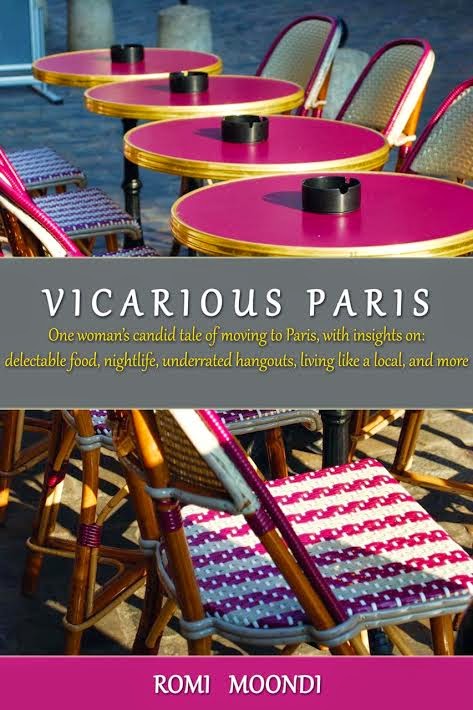 Change the Word: Who is this travel guide written for?
Romi Moondi: This book is written for first-time Paris travellers looking for recommendations, to “some day I’ll go to Paris” dreamers looking for inspiration, and to those who have already been to Paris before, but are looking to discover something new. Overall, it offers the usefulness of a guide (over 130 places visited!), whilst being entertaining and personalized like a memoir, or at least that was my goal.

CTW: What should someone do if they have only enough time to visit one place or have one experience in Paris?
RM: If you only have time for one experience in Paris, forget about the tourist attractions, and let your experience be a “stroll.” Strolling in Paris is the epitome of getting a feel for the city’s vibe, the beautiful Parisian architecture, and the window into the past. Your best shot at getting all of the above would be a stroll through the hilly neighbourhood of Montmartre. I don’t mean the touristy area right next to the Sacré Coeur basilica, but rather a stroll up the hilly street of Rue Lepic (beginning at métro station Blanche). Here your only agenda is to wander, observe, and stop for a drink when you see a nice terrace view.

CTW: When is your favorite time of the day to go to your favorite Parisian spot?
RM: I absolutely adore sunset in Paris by the river. My favourite viewing spot is on the bridge Pont Neuf along the right bank side. From here you can observe the last rays of sun glimmering off the surface of the Seine River, as well as take in the top two thirds of the glorious Eiffel Tower.

CTW: Where were you most inspired as a writer in Paris?
RM: There’s a café in the Latin Quarter at the top of a hilly street, a spot with no traffic or tourists. I’d often sit on the terrace with my notebook, surrounded by the quiet buzz of French conversation. That, in combination with the view of the downhill street, was totally inspiring (PS: since you’re clever enough to read the “Change the Word” blog, I’ll tell you exactly what café I’m talking about! It was Le Petit Café in the 5th (6 Rue Descartes, M10 Cardinal Lemoine))

CTW: Why were you drawn to Paris?
RM: It’s hard to define why it was Paris specifically; I just remember being fascinated by Paris for years. In 2011 and 2012 it became an obsession, as I bought and read every book on Paris I could find. I suppose Paris represented adventure and freedom, as it’s this faraway place with a wonderful history of dreamers, and I was learning about it all during a time when I felt pretty trapped, both by a job and by the fact that I’d never really traveled on my own (except for a couple of long weekends in New York City).


What if you could get Paris nostalgia, Paris recommendations, vivid Paris daydreams, and regular doses of humour all from one book?

Welcome to "Vicarious Paris," where the author takes you along through every corner of Paris, on a journey to cafés, bakeries, cocktail bars, and the ever-charming side streets of Paris. With candid memories and descriptive scenes, the author will invite you to days and nights with her expat and native French friends, for an inside peek into life and fun in Paris.

As a full-length book (80K words) with photos, and over 130 places described in vivid detail, you'll come out of the experience feeling like you just returned from a wonderful vacation in Paris.

More specifically, here is a small preview of the things you’ll vicariously do: you’ll mingle with strangers at a wine tasting, you’ll have cocktails at one of the ritziest bars in Paris, you’ll feast on a multi-course French style brunch (in a totally unpretentious environment), and you’ll even have a shot at romance in a charming café in Montmartre.


About the Author
Romi Moondi lived in Paris for six months in 2013, as well as for the summer of 2014. During her stays, she spent a lot of time with locals who shared great insights, navigated the streets with her expat partners in crime, and also had her share of solo expeditions (all three of which are key components to this insider’s view of Paris).

She has also written a romantic comedy series called “Year of the Chick.” The first book in the series is free as an ebook, and the third one is set in Paris and inspired by her trip.