the great american whatever 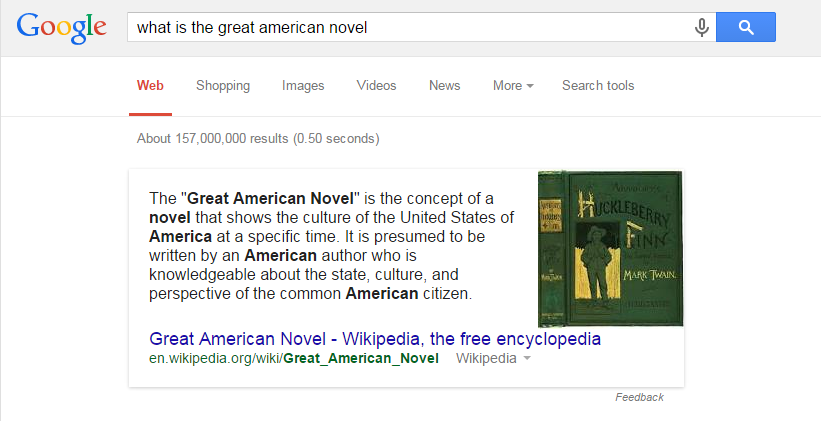 I've heard this a few times in the past year, and it always puts me on edge.

"What do you mean the Great American Novel?" I'll ask.

"Do you think it has to take place in this past?"

"That's historical fiction. And those books you mentioned didn't take place in the past when they were written. They were contemporary stories at the time." My blood pressure spiking, I have to ask, "Do you think the Great American Novel is supposed to be about a man?"

"Or maybe you think it needs to be written by a man. Name one book written by a woman that you consider to be a Great American Novel."

At this point, I'm usually worked up enough to lose it. I go on a rant about the state of the publishing industry, the value placed on certain works, and the perceived sexism that exists. I'll list all of the books I had as required reads in high school, emphasizing how few were written by women compared to ones written by men. I go on to talk about how little I took away from most of those required reads, because I didn't connect with the characters. I ask why these books were considered so much better than others and who gets to decide.

It's not that I have anything against those books, really, aside from the fact that it's all so arbitrary. And the reason I get worked up is because I know what they mean when someone mentions the Great American Novel. They're saying those books are more important and are better than everything else and that I'm not a serious writer unless I am in the quest to write the Great American Novel.

I hate the labels we put on books, movies, and art. When we do that, it's like we're trying to place value on the work. Dramas are more valuable than comedies (or so it seems based on the bulk of the Oscar nominations each year). "Literary fiction" is more valuable than "chick lit" or "romances" or "thrillers" and so on.

But why does it have to be that way?

Look at that definition of the Great American Novel. According to Wikipedia (and, yes, I realize it's not a scholarly source, but this is hardly a scholarly blog):


The "Great American Novel" is the concept of a novel that shows the culture of the United States of America at a specific time. It is presumed to be written by an American author who is knowledgeable about the state, culture, and perspective of the common American citizen.

Based on that definition, don't my books qualify?

Hard Hats and Doormats is a story about a young woman who is trying to figure out how to be an adult while out in the world for the first time. She was born in Iowa and lives in Houston and exists now. She works with men and women in the Gulf Coast oil industry. She falls in love, but struggles with having a grown-up relationship. It's set during the recession, and her decisions are often fueled by the fear of a shaky economy.

The Marrying Type is another story about a young woman, set in present day Charleston, South Carolina. She gets wrapped up in a reality TV show--a truly American institution of you look at the TV schedule. She struggles with proving her worth to her family, who will always consider her the youngest child in need of sheltering, even when she's far more capable than them. She's loved and lost, romantically and personally, and she's just trying to make it in the world.

Why do these stories matter any less than another book because they fall under a specific category on Amazon? Why can't they capture the state, culture, and perspective of the common American citizen because they have a happy ending? I work at my craft. I strive to capture human emotions and evoke feelings and ideas in my readers, even if the cover is periwinkle or has a fierce as hell woman carrying a hardhat on the cover.


I'm neither the first not most eloquent person to weigh in on this subject. There's plenty of discussion, debate, and even name-calling, which to me suggests there's a real issue here. I'm not telling everyone my books are for them. I'm not asking for my books to be added to an English Department's curriculum (I actually don't think it's fair to require teachers to use the same set of books year after year, because it stifles creativity and limits what books students are exposed to, but I realize that will never change).

I am asking for respect for myself and my stories. I work hard on them, and while they may not be a masterpiece to whoever decides things like that, they are everything to me. And while we're at it, can we just respect each other in general? What gives any one of us the power to decide what is great and what is not?


Basically what I'm saying is this: I'm going to keep writing the stories that feel the most authentic and real for me to craft as a writer. If they happen to fall into a category like chick lit, that's fine. I'm me, and what I create is ultimately mine. I can't pretend to be anything else.

Email ThisBlogThis!Share to TwitterShare to FacebookShare to Pinterest
Labels: rant