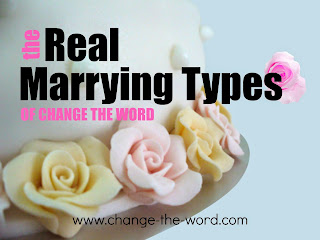 In today’s new The Real Marrying Types of Change the Word, Kaley Stewart shares some of the lessons she learned during her recent turn as the MOH in her best friend's wedding.

When Laura first asked me to take part in her promo blitz for her (amazing) novel The Marrying Type (read Kaley's review here), I wasn't sure what to write about. I'm not married so I can't talk about my own wedding. I've only attended a handful of weddings and I've been a bridesmaid in three but, gulp, only one couple is still together. I've also just recently been Maid of Honour in one of my very best friend's wedding. It was a perfectly perfect day, and I still get a silly grin on my face whenever I think about it (and it's been a few weeks since the big event!). While I was lucky that my MOH duties were minimal (she and the wedding were super low-key), I still wanted to make sure the bride had the best day ever. Did I succeed? I hope so! Over the years I've learned a thing or two about what makes a good, or bad, bridesmaid. Here are some of my dos and don'ts that you can follow (or not) the next time you're asked to be a part of a wedding.

Don't say yes just because you feel obligated or guilty.
Being a bridesmaid or maid of honour is no easy task – and it's not cheap either. If you're not super close with the bride (or groom), if you are struggling financially, or if you just plain don't want to don a dress you'll never wear again, say no. Tell the bride you love her and you're honoured but at this point in your life it's not feasible for you to be in a wedding party. She'll understand if she's a true friend and will probably appreciate your honesty in the long run because it will mean you're not worrying about money or hating life at every bridal event.

Do write your speech more than a week ahead of time.
As maid of honour you're (usually but not always) required to make a speech. You think you have a ton of time to write something but the big day will sneak up on you. I may have finished my MOH speech on the Tuesday before the wedding.  While you can still pull together a great speech in a short time period (like I hope I did!), it will be better for your nerves if you have it done well in advance. Then you can practice (and yes, you should read it – out loud – several times) and that will take some of the nerves away. Plus, you'll catch the sentences that have you stumbling over your words. Bonus tip: don't forget your wine glass when you go up to make the speech like I did.

Don't make your speech all about you and the bride.
Obviously you're going to mention how you know the bride and how close the two of you are because that's why you were chosen to be MOH. But lay off on the jokes about how many guys she dated prior to the groom or how crazy spring break was that one time. Grandma doesn't need to hear that. Also, don't forget about the groom! Even if you don't know him super well, talk about how great he is for her and how happy she's been since she met him. You get bonus points if the groom is more worried about your speech than the best man's though (I had to assure the groom that I would behave...mostly.).

Do try to attend as many pre-wedding events as possible.
If you're lucky the bride will not make every shower and party mandatory for the bridal party. But you should still try to attend. It's helpful when you're in the same city as the bride-to-be, because then you don't have to add in travel costs as well as gifts and goodies. Even if you can't afford to bring a gift, your presence will be appreciated. Besides, someone needs to make that embarrassing hat made of bows! All that being said, don't feel bad when you absolutely have to decline due to scheduling conflicts or lack of money. You should not be putting yourself in debt for someone else's wedding!

Do do whatever the bride asks.
Within reason of course. Try not to get arrested! But this is her day and her vision so if she wants you to wear a pink dress that is so not flattering on you, you do it. (True story.) Your ultimate role as bridesmaid or maid of honour is to make sure the bride happy and has the wedding of her dreams.

Don't micromanage.
Sometimes the bride will give you carte blanche on certain things. Maybe that's your hair, shoes, or look for the day or maybe it's just who you can bring as your plus one. Sometimes you can anticipate what the bride will want or need, which is great. But that doesn't mean you can assume you know best or just do things without asking if the bride even wants those things done. You also should not throw a shower if the bride really doesn't want one nor should you invite strippers to the hotel room for the bachelorette if the bride has been adamant about no gyrating men at the party.

Do try to do a little something extra special.
You don't have to pull out all the stops here (unless you've got oodles of money, in which case, can we be besties?). I've had personalized bridal party tank tops made and I've purchased the Starbucks drinks for the bridal party (but the barista didn't give a hoot that they were for a wedding party...). A friend's MOH made the sweetest bouquet out of book pages from one of her favourite novels (Anne of Green Gables, since I know you'll all be curious). Pick a little something extra to give or do that will make the bride smile when she remembers her wedding day.

Do support the bride every step of the way.
This is the big one, ladies. When you accept the role of bridesmaid or maid of honour, you are agreeing to be a pillar of strength for the bride. Providing an extra pair of hands for sending invites or making crafts, an ear for listening to her concerns for the big day, or a shoulder to cry on is key. It's especially important that you're there for her emotionally if you live far apart. That was the case with the last wedding I was in as the bride and I live six hours away from one another. It's hard to be a terrific MOH and help with baking cupcakes or seating charts or anything, really, when you only see each other once during the whole engagement. But those things aren't the most important part...it's helping her through the roller coaster of emotions she'll be feeling as she approaches the big day.

At the end of the day, the wedding you're in is supposed to be a happy, awesome, fun day. You'd be surprised at how many of the silly worries evaporate after a moving ceremony and a few cocktails. So don't stress. Support the couple and have a great time at that wedding!


We'll be back with more "The Real Marrying Types of CTW" tomorrow with a new story from Chrissy Wolfe.


About Kaley
Kaley Stewart has had a lifetime love affair with books. Her passion for reading led to the launch of Books Etc., her popular book review blog, in November 2010. When she's not reading, she enjoys playing with her bunny, Tonks, and drinking lots of tea. You can find her on her blog, Twitter, and Instagram.