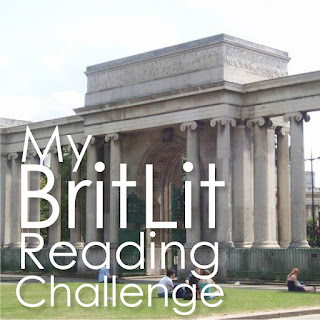 Blogger's note: Like any good amateur anglophile (I'm not really devout enough to call myself a full-fledged one) and English major (okay, it was technically a double minor) I desperately wanted to take BritLit in high school and college. Unfortunately it never worked out. So in an attempt to make up for lost time, I'm working my way through the list of stories I figured I'd read in those classes and (true to form) skipping the ones I would've used Spark Notes for instead. This is my Brit Lit Reading Challenge.

My sophomore year of college, my mom won tickets to see a traveling theater's performance of William Shakespeare's Hamlet. Vaguely familiar with the play (anyone who grew up during Adam Sandler's movie making hay days of the 90s will recall the rendition of the "To be or not to be" monologue) one of my roommate's and I gladly accepted the tickets. I mean, it was kind of exciting. We had a chance to dress up on a school night and go to the Lied Center and pretend we were super cultured. (We tried to be, but going to the campus art museum and one play after countless nights spent binge-watching every variation of CSI and The Girls Next Door probably doesn't count.)

While watching the play (by a performance group I can't remember, but was quite good) I was struck by a few things:
Still, it was entertaining, and when it came time to kick off my Brit Lit Challenge, which included a list of Shakespeare's plays, Hamlet seemed like a good place to start. For one, I had seen the play, so I figured that would help me follow the story better as I read. For another, my one-time love Benedict Cumberbatch his playing him in London later this summer. Since I couldn't swing a trip to England to see him, I used my imagination while reading.

I was left with many of the same thoughts I had while watching the play, but I did highlight some text passages that stuck with me after reading. Brace yourself: You're about to get insight into what I was like in most of my English classes. I was the nerdy girl who spoke up often and then made herself even nerdier (while probably dumber at the same time) by spouting off connections to other basically unrelated books/movies/TV shows/plays.


"This above all: to thine own self be true,
And it must follow, as the night the day,
Thou canst not then be false to any man."

(Please tell me I'm not the only person who reads this passage--which is all good and probably inspiring--and remembers the scene in Clueless when Cher corrects Josh's date for mis-attributing the quote to Hamlet when "that Polonius guy did"?)


“There is nothing either good or bad, but thinking makes it so.”

(Maybe I've been following the news a little too closely during the past year or so and feeling really bummed about the state of things, but this quote kind of stuck with me. Not entirely for the point it raises--that people's thoughts and beliefs are ultimately what define morality, but because it put things in a bit of perspective. I'm guilty of frequently falling into the mindset of "Wow, things are terrible these days" or "What an awful world." But really... every generation has the moments. That's by no means comforting--wouldn't it be great to live in a world that was always wonderful and free of pain and suffering?--but maybe it's a challenge to keep fighting the good fight? I don't know. I'm attempting to channel intro philosophy, and I never took it.)

From the "To be, or not to be" monologue:


"To die, to sleep -To sleep, perchance to dream - ay, there's the rub,For in this sleep of death what dreams may come..."


"Thus conscience does make cowards of us all..."

(Again, both of these lines bring out the philosopher in me. They're also more beautifully put than anything I say when I get all broody.)


“Brevity is the soul of wit.”

(This is another example of Bill Shakespeare being more poetic than I am. I like to tell people "brevity is beautiful," which I actually stole from someone else, but maybe I'll use this line going forward.)


“I loved Ophelia. Forty thousand brothers could not, with all their quantity of love, make up my sum.”

(Right, so I'm the girl who read Fifty Shades of Grey--without trying to be ironic--and enjoyed it. And I'm guessing it's that part of me who read this passage--spoken after Hamlet has been a total douche nozzle to everyone, including the woman he apparently loved prior to the play, and discovers she's dead, seemingly by her own hand--and thought, "Wow. That's kind of beautiful. I guess he really did love her." I promptly reminded myself that Hamlet was hardly a romantic hero--not even Byronic based on the way he behaved during the play--and pretended to be offended by his too little too late statement, all while kind of wishing someone would claim he loved me more than 40,000 other people's love combined.)

If you're still with me after reading through this rambling mess, and gaining a little insight into the way my brain works while I read, thank you. And as your reward, here's my favorite interpretation of Hamlet: