guest post with caroline fardig about writing a series

Blogger's Note: Caroline Fardig recently released Bad Medicine, the third novel in her Lizzy Hart Mysteries series. As a new series writer myself, I'm curious about how other authors do it. Caroline graciously provided this thoughtful response to my question of how she writes a series and how she maintains consistency and continuity throughout. Be sure to enter to win a fabulous prize using the Rafflecopter below. 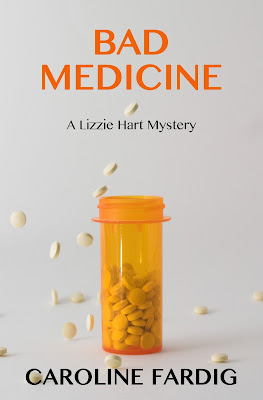 First, I make sure to have a few very well-rounded characters bouncing around in my head before I ever put pen to paper (or fingers to keyboard). These guys live in my mind for months before I ever write a single word. They grow and develop, they interact with one another, and they become a part of me so I know them and can easily tell their story once it’s time.

Then comes the setting. You’ve got to have an interesting enough place in which to set your characters loose, otherwise, you’ll have to struggle to find things for them to do several books down the road. Small towns might be considered “boring”, but when your characters have grown up together, they know all of each other’s secrets and know exactly how to push each other’s buttons. With a big city, you might not always have a plethora of characters with storied history, but you do have a wealth of interesting places, events, and new people to meet. Use the setting to your advantage and broaden it as needed.

As for plot elements, you need to make sure you don’t contradict yourself in a later book. The way I do it is a two-pronged approach. I keep a notebook of ideas and information on each book I write. It will have a list of characters (with their traits), a list of red herrings, all of my potential victim/murderer combos, plot outlines, and so forth.  I refer to my notes all the time to make sure I haven’t already used an idea. My second safeguard is going back to the previous book(s) in the series and searching for the character’s name and any words associated with the description, event, or idea I’m using in my current book. For example, just a few minutes ago, I couldn’t remember if I’d never given a name to one of my “off-screen” characters.  I thought I’d only ever referred to him as someone’s “grandfather”. So, I searched for “grandfather” and found that I indeed had never named the character. If I had suddenly started calling him “Grandpa Bill” when I’d already named him “Grandpa Steve” in a previous book, it would have been a problem. Now that I’ve thoroughly researched it, I can now name him whatever I want with confidence. 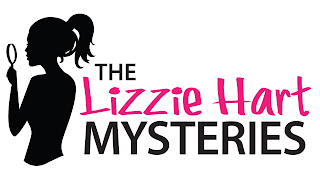 Another thing I’ve been doing lately is to read through each secondary character’s scenes in succession in order to make sure I’m being fluid with their personalities. For example, if I want to read all about Lizzie’s best friend Julia, I search my Word document for “Julia” and read only her scenes straight through. It does wonders for continuity.

Lastly, I always have my next book in mind. If I know a certain character is going to have a central role in my upcoming book, I give them a little cameo in the current book. For instance, in That Old Black Magic, Lizzie’s ex Lee is a very central character. So, I gave him a good introduction in It's Just a Little Crush, even though he really didn’t need to be in that book.  I wanted my readers to get to know him a little before I stuck him in the spotlight.

You have to be on your toes when you work with a series. However, if you’re organized and thorough, it’s easy to keep track of your fictional world. Happy Writing!

What do a smokin’ hot detective, an evil chiropractor, and a couple of blind dates from hell have in common?

Lizzie has to wrangle them all in the third book of THE LIZZIE HART MYSTERIES series!

BAD MEDICINE is the third book in THE LIZZIE HART MYSTERIES series. Now available on Amazon.

Lizzie Hart is overjoyed that six whole months have passed without a single murder in the sleepy town of Liberty. It’s also been six months since Blake Morgan heartlessly dumped her, but she’s determined to get over him. She’s slimmed down, ready to party, and injury-free, except for a little nagging pain in her ankle. She’s also very single, but her friends are doing everything in their power to fix that—including setting her up on one disastrous blind date after another.  Lizzie’s reprieve is short-lived when an old friend of hers is found dead from an apparent drug overdose. She wants to write it off as bad behavior after having seen the guy cheating on his wife with the new chiropractor in town. However, when she sees that same chiropractor playing doctor with another man who ends up dead, she worries there could be murder afoot.

Doing her best to stay on the right side of the law this time, Lizzie decides to go straight to the police with her suspicions. Unfortunately, the only cop available to speak with her is the stern yet hot new detective who has already given her a traffic ticket and a reprimand for public intoxication. Not surprisingly, he brushes her off, leaving her no choice but to begin snooping on her own. Lizzie soon learns she’s going to need help to get to the bottom of this mystery, but her best partner in crime solving, Blake, has turned into her worst enemy.

Can Lizzie and Blake find a way to work together to catch the killer…or will they kill each other first?

CAROLINE FARDIG is the author of the LIZZIE HART MYSTERIES series and the forthcoming DEATH BEFORE DECAF, available November 2015 through Random House.  Her eclectic working career included occupations of schoolteacher, church organist, insurance agent, funeral parlor associate, and stay-at-home mom before she realized that she wanted to be a writer when she grew up. Born and raised in a small town in Indiana, Fardig still lives in that same town with an understanding husband, two sweet kids, two energetic dogs, and one malevolent cat.