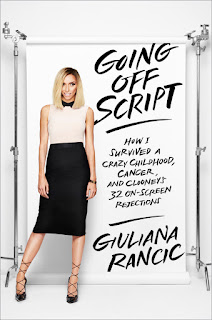 A sometimes follower of E! News and a fan of Giuliana and Bill, I was pretty excited when my friend recently lent me a copy of Giuliana Rancic's new memoir Going Off Script: How I Survived a Crazy Childhood, Cancer, and Clooney's 32 On-Screen Rejections. Written in a casual, very Giuliana-like tone, it tells the story of growing up in Italy, moving to America, making her mark in the entertainment news biz, finding the love of her life, and fighting cancer to save it.

Giuliana Rancic is best known for interviewing A-listers on the red carpet and E! News, skewering their shocking style choices on Fashion Police, and giving viewers a front row seat to her marriage and family life on her reality show, Giuliana & Bill. What fans may not know is that she learned English from Eddie Murphy, got her American citizenship so she could be a beauty queen, and used to have a bad habit of stealing cars for fun.

Giuliana bares this and so much more in her hilarious, warm, and inspiring memoir, Going Off Script.  From a young age she dreamed of being a TV anchorwoman but, because of her inclination toward mischief and away from schoolwork, her path to her dream job was far from straight. After a fateful (and mortifying) encounter with the late Senator Ted Kennedy, she learned that Hollywood news was where she belonged.  Thankfully for readers, this epiphany led her to a bounty of LA misadventures (featuring notables such as Johnny Depp, Leonardo DiCaprio, and Russell Crowe) and an entertaining behind-the-scenes perspective on what our favorite celebrities are really like.

In spite of her glamorous Hollywood life, however, Giuliana could not escape some rockier times, including her battles with infertility and breast cancer.  Here, for the first time, she reveals the whole truth behind her well-publicized struggles, and the highly controversial decisions she had to make. And, of course, at the heart of it all are the two loves of her life who keep her strong through everything, her husband Bill and her son, Duke.

Candid, funny, and poignant, Going Off Script is an autobiography that proves you don’t always have to follow the rules to get the life you’ve always dreamed of.

I went into the book feeling like I already knew quite a bit about Giuliana. I suppose that's the way a lot of us feel when we see someone on TV every day, particularly when we're given a pseudo-backstage glimpse of their life through a reality TV show. But there were quite a few stories in here that were new to me. And I also saw a more accurate depiction of what was really going on behind the scenes of cameras.

Though I laughed a lot, there were several moments of this story that had me full-out crying. While the Rancics were publicly candid about their struggles with fertility and her cancer diagnosis, these parts of the book were particularly crushing to read. They put on such a brave face publicly, that it makes me admire them even more to know how much of a hard-fought struggle it was to keep going when facing personal devastation.

Probably my favorite part about this book was reading more about how Giuliana and Bill's relationship developed. I've always thought they seemed like such a fun, loving couple that challenges and brings out the best in each other, but in reality it's all that times eleven. They're definitely a total #relationshipgoal.

I laughed a lot reading about her childhood, and will admit I was surprised to hear how much she struggled in school, though it made a lot of sense. It was at times inspiring to see how driven she was to fulfill her dreams even when there were naysayers telling her it wasn't going to happen.

And... I had actually just finished reading this book the night before Giuliana announced she would be leaving E! News. Based on some of the stories she shared in the book, I wasn't at all surprised by the news. Though she seemed appreciative for all of the opportunities her career with E! has afforded her, you definitely had the impression that maybe enough was enough and she was ready to move on to the next phase of her life.

If you're a fan of Giuliana and her work, this is a solid, fast-paced, and entertaining read that feels more like a gossip-session between friends than a straight-up memoir, which made it enjoyable.