my jealousy can go fly a kite

It's been a while since we had one of these posts, but grab your jackets and meet me at the park down the street. Let's go fly a kite... 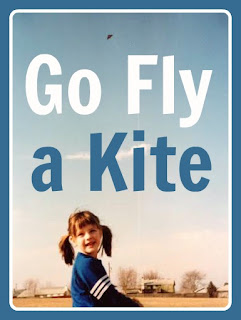 If you're new to the blog, this is a moment where I'm telling someone (usually myself) or something (usually a bad habit of mine) to go fly a kite. And if you're not familiar with that little diddy, basically it's a nice no swearing way to say go eff yourself.

So back to why we're flying a kite today. This is nothing new, but lately it's reared its ugly head in my life again, and it's getting out of control. The green monster that sneaks out and sours what should be sweet and for lack of a better description, turns me into a bit of a mean wench. I'm talking about jealousy.

I've been feeling a lot of jealousy lately. It happens almost every time I'm on Facebook. It happens every time I see a post from a friend or acquaintance (particularly fellow writers) when they share what is great, wonderful news for them and their careers. Instead, I see the "my book is a best-seller" and "I just received my first advance" and "my fans keep saying this" and, well, I get jealous. I'm sure it's a perfectly normal, natural thing, but I don't like what it brings out in me. I don't like that instead of thinking, "way to hit that best-seller list" or "you earned that reward" or "you have such wonderful fans," I turn into an Ursula-like monster who grows bigger and badder until she's about to explode and thinks rather loudly HOW COME I DON'T GET THOSE THINGS TOO??? (She also tends to write insanely long run-ons, but she doesn't have the self-discipline or energy to rewrite them into smaller, more user-friendly sentences.)

I kind of touched upon these feelings last week with my post about wishing my life away (read it here). That envy feeds me jealousy. And that's a bad thing. I mean, when you watch a lot of TV shows and movies or read a book, one of the major motivators of any villain is his or her envy/jealousy of someone else. I don't want to be the villain in my own life.

Which is why right now--and it's not going to be easy or as simple as flipping a switch--I'm going to do my best to adjust my mind-set and get over being so jealous. I'm not entirely sure how that works. I suppose one thing would be to spend less time on social media, but who are we kidding? I can't quit it (I have a blog and novel career to run!). But maybe I should handle it the way a counselor advised me to handle my panic attacks. I should recognize the triggers and avoid them. And when that isn't possible, I should know the starts of an attack and be prepared to handle it. For the panic attacks, I'm supposed to walk it off or go to my happy place (which is actually a list of five things that bring me a lot of joy that I focus on). Maybe I do the same with the jealousy.

And maybe I should work harder at being happier when other people succeed. Because at heart I am happy for them. They've worked hard. They've earned their rewards. They don't deserve someone begrudging them their joy.

So that's going to be one of my new goals for the near future. I'm going to manage my envy and tell jealousy to go fly a kite.

Email ThisBlogThis!Share to TwitterShare to FacebookShare to Pinterest
Labels: go fly a kite