Over the weekend I did some plotting (and even writing) for the third book in the Queen of the League series. While I went into this quartet with a general idea of some of the key character development and milestones that would happen for Harper Duquaine, the heroine of the stories, I didn't necessarily know all of the particulars.

Now that the first book will soon be available to you readers, and the second book is in the hands of beta readers, I have a better feel for who these characters are and how they can get to where they are supposed to go in the journey that is this series. It's kind of an exciting place to be as a reader, because this is where a lot of the magic happens.

I've shared some of my practices for writing and editing (you can view an archive of some of them under the "Writing Tips" tab), but I thought it would be fun to share a few of the tools I have used to create this particular story.


Before and After
Last week, after finishing the second draft of book two, I paid a visit to my sister's bar and made a list of where Harper would be at the beginning of the third book under the "Before" column on a few sheets of paper. In the other column, under "After" I wrote where I hoped she would be by the time the story ended. I mulled this over for a couple of days, changing a few things here or there. I also considered which of those plot developments or changes might be the most interesting to focus on.

(Note: I skipped that last part of the Before and After test when writing the second book in the series, and I imagine that's part of why I had so much reshuffling and revising to do. Lesson learned. This is a constantly-evolving process, my friends.


Ten Scenes
With a better idea of the main plot elements and themes of this story, I used the Ten-Scene tool to shape the major plot arc of the story. I recently reorganized my desk and stumbled upon quite the collection of index cards, which I used to help me visualize the flow and ebb of this book's story.

See how pretty that looks: 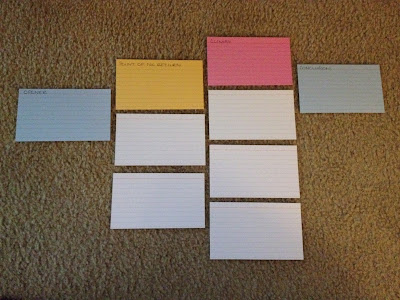 This was snapped before I wrote out the actual plans for each of those scenes, because I didn't want to give any spoilers, but you get the idea.

Once I could actually see how these ten key scenes would play out, I was better able to visualize what would need to happen in between--and some other smaller plot elements--which is where the next part comes into play...


Working Synopsis
This is actually still in progress, but using those ten scenes, I'm shaping out what will happen in each chapter and each scene in between to get us to those key moments. This is the part of the process that will be most loose. I like to leave myself open to making some changes as the story progresses. That frequently means cutting, adding, or changing a previously planned scene--hopefully before it's written.

I sketch down some of my ideas in a notepad while I'm out and about, but I do most of it directly in Scrivener by organizing my folders and the scenes within them. God bless Scrivener for speaking to my Type A plotting tendencies.


Brief Sketches for New Characters
I'm introducing a few new characters for this book. They needed names, personalities, and an explanation of their purpose to the story.


Plotting the Fantasy Football Season
This is an added step unique to this series, but each book in the Queen of the League series has to have a fake football season play out. As part of that, I need to know how Harper's team will perform and how it is affected by or shapes the rest of the story. For example, I can't have Harper being in an amazing mood if she's just lost a major game to her opponent, can I?


So that's kind of where I am with this story. I'll admit, I wasn't planning on writing this one next, but after spending a little time away to write a Christmas novella and reading through the first and second books again (not to mention the upcoming start of football season) I was in the mood. Wish me luck!