Weeeeeeeeeeeeeeeeeeeeeeeeee!!!!! Today's the day. First & Goal is now available in ebook on Amazon, Barnes & Noble, and Kobo. (Fans of print, stay tuned. It will be available in paperback later this month.) This book was a lot of fun to write. If you've followed my Fantasy Football Prince Charming posts in the past, then you already know that this is a topic near and dear to my heart.

Thanks to the generous support of various bloggers, you'll have a chance to learn more about the making of First & Goal during the next couple of weeks. Be sure to check out the complete list of guest posts and reviews that will be featured as part of the official release blitz below. 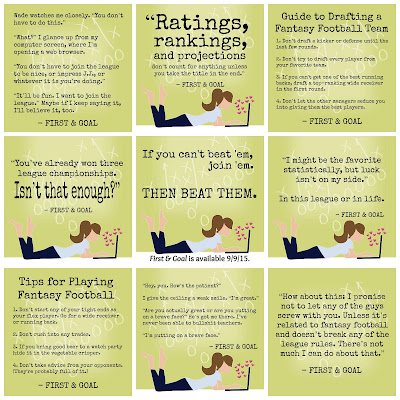 Before we get into more details about the book and where you can buy it, I would like to thank the people who made this book possible including my beta readers Brea Brown, Sarah Chapman, and Whitney Lake; the people who gave me insight into the world of fantasy football and high school coaching; the readers who provided names for the fictional football players in the book, including Jamie Adams, Carolyn Ridder Aspenson, Erin Baker, Kathryn Biel, Jackie Bouchard, Melanie Glinsmann, Michelle Halpern, Tobi Helton, Philippa Moore, Martha Reynolds, and Laura Westerman.

I also need to thank the fearless Marching Ink team who worked tireless to see this project through production, including Cat Lavoie, Samantha March, Chrissy Wolfe, and Polgarus Studios. Thanks to Jessica Sodeke for taking my official portrait.

Thank you forever and ever to my family, friends, and readers for giving me the motivation and passion to keep going.

It really does take so many people to make a book possible, and I'll never be able to thank everyone--including you blog readers--enough for the support.

I also appreciate the bloggers and reviewers who have taken the time to help me spread the word about First & Goal during the next week. Check them out: 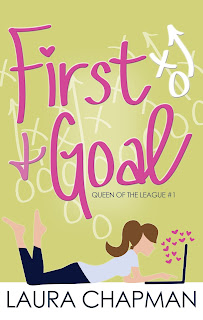 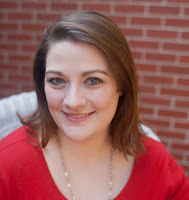 Laura Chapman is the author of First & Goal, The Marrying Type, and Hard Hats and Doormats. Her work appears in Merry & Bright, A Kind of Mad Courage, and a forthcoming Christmas anthology from Marching Ink. A native Nebraskan, she loves Huskers and Packers football, Netflix marathons, and her cats, Jane and Bingley. Laura is currently in pursuit of a fantasy football championship while penning her next novel.