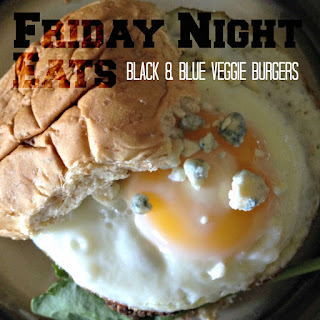 This week’s Friday Night Eats recipe doesn’t come from First & Goal, but it is definitely one I could imagine our friend Harper Duquaine making for a football watch party. This Black & Blue Veggie Burger is a simple, but delicious, way to create a vegetarian-friendly dish for a hot dogs and hamburgers kind of day.

Plus, it has blue cheese crumbles in it, which automatically gives you a sophisticated air. And when you’re sitting in front of a TV swearing at refs, dropped passes, and bad blocks, it never hurts to add a little class to your day.

Directions
Combine mushrooms and black beans in a food processor and run until the mixture is thick, but still chunky. Mix in quick oats, egg, and garlic cloves. Stir in blue cheese crumbles and season to taste. (I’m a simple girl, so I use fresh black pepper.) Separate into six equal-sized portions and form into patties. Cook in skillet over medium heat on both sizes. Serve as desired. 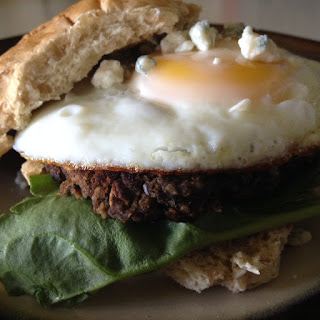 According to MyFitnessPal, this recipe comes in at about 150 calories per burger, which is comparable to what you’ll find from store-bought veggie burgers in the frozen foods aisle.

You can serve these burgers however you like. For this tasting, I had the veggie burger on a whole wheat bun topped with spinach, over-easy egg, and a sprinkling of leftover blue cheese crumbles. Served this way, the dish comes in under 400 calories and contains plenty of protein and lots of flavor. While I highly encourage you to try this pairing, you can eat it any way you like it. (I’d also suggest topping it with avocado slices if you’re a fan.)

When it comes to beer pairings for this veggie burger, you really can’t go wrong with classics like Bud Lite or Michelob Ultra, but you can class it up with one of my (and Harper’s) favorite seasonal beers: Sam Adams Octoberfest.

Though I’ve attempted black bean burgers in the past, this was my first veggie burger, and it’s a recipe I’ll come back to again.