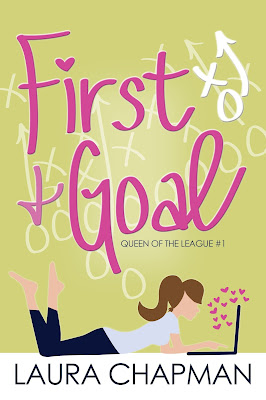 Now that it's Woman Crush Wednesday, I'm sharing the story behind your future BFF Harper Duquaine, the fun, (sometimes) fearless woman who is out to show the men in her fantasy football league a thing or two in First & Goal.

Let’s enter the truth zone: I admit I’ve rolled my eyes on more than one occasion when I hear stories about other authors saying an idea came to them in a dream. (Yeah, it’s super wenchy, and I’m a total jerk for scoffing at another person’s process.) I’ve always had to do a fair amount of planning, brainstorming, and soul-searching before, during, and after my own writing adventures.

I’ll also admit I’ve had dreams so vivid and seemingly compelling, I’ll wake up and think, “That would make an amazing book” only to realize a) I was actually dreaming about something I already read or watched or b) I lose interest before the story takes off.

Maybe that’s the real source of my eye-roll: jealousy, because I lack the follow-through or brilliancy to make a dream turned story happen for myself.

I’d been struggling to finish a first draft of First & Goal for about eight or nine months when I had a breakthrough—the one I needed to light a fire within me to figure out the best way to tell the story and do it. And… it originated with a dream.

Yes, I became the source of my own eye-roll.

Here’s the gist of the dream… It was one of those recurring ones where I’m pregnant. (Everyone has those, right?) This one was a little different than previous ones, because instead of trying to figure out how I didn’t know I was pregnant (I’ve never even seen that show), who the father was (I guess it was a non-issue, because I’d achieved a new level of independence in this REM cycle), or how I planned to be a good parent (I was going to channel that new bad-assery and be the perfect mom), I was fixated on one issue: What to name her. (It’s a girl btdubs.) I’ve never actually named any of my dream pregnancy babies, so I was pretty interested to see how it played out.

I struggled and listened to input from family and friends without really hearing them. Then suddenly, on my way out of the hospital, I turned to the person doing the paperwork and said, “Her name is Harper Elena.”

I woke up shortly after with a kind of, “well that was weird” feeling. Harper Elena. Id’ never considered either of those names for a baby and neither had appeared in any of my recent TV viewing or reading. While I tried to fall back to sleep, the name played over and over in my mind. By breakfast it all snapped together. I needed to change my character’s name to Harper. And I needed her personality to reflect the independent, Type-A, yet still overly worried about a few minute details version of myself from the dream. (I later thought about the middle name and how it sounded as a last name and chose Duquaine because a) it fit Harper’s heritage and b) it had a similar sound.)

Within a few days of making that big character breakthrough and making some executive decisions, I had my outline revised and I was writing again. This time everything clicked and it took a matter of weeks to complete the previously unfinishable first draft.

Now, if you're curious about who I imagined playing her role in the big screen adaptation, it's not quite so definitive as who would play Brook. I've considered several actresses, but today I'm leaning toward Lyndsy Fonesca:


A few other fun facts about Harper:
All in all, I hope she's someone people will read about and want to be friends with--because we still have more adventures together.