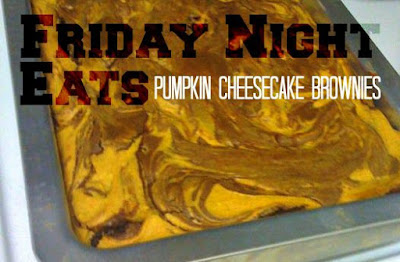 Throughout First & Goal, Harper likes whipping up delicious treats to take to the weekly Sunday afternoon watch parties. As someone trying to win over her co-workers, Harper’s baked goods are one of the ways she quickly ingrains herself within her crew’s game day culture.

For one of those watch parties, Harper brings along Pumpkin Cheesecake Brownies, which are an instant hit with her colleague Gio.

(Forgive the fugly photos--these were taken years ago, before I ever imagined I’d write First & Goal let alone use them for a blog post to support the story!)

Serves 12-24 (depending on how big of slices you like)

While I can’t promise that you’ll win over your own crew with this recipe, I did take these to a Husker watch party a few years ago and they were a hit.

But as a bonus for the low-quality photos...