Continuing our celebration of football watch party dips, this week I invited my publisher and fellow Packers fan Samantha March (and her husband, Mitch) to share a favorite recipe. 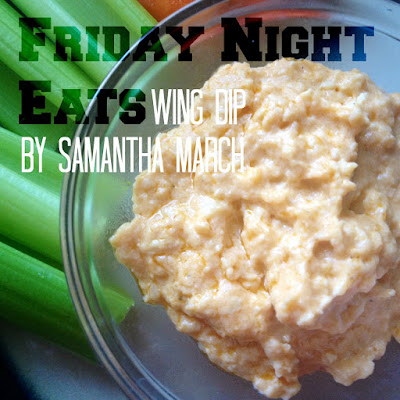 
So... I am not a domestic goddess. I don’t know what it is, but that just is not me. I can’t decorate my house for the seasons, I don’t get excited to light fresh candles and whip out my dust rag, and I don’t want to be in the kitchen. Really for any reason. You know what I would rather be doing on a Sunday afternoon? Watching some NFL action. Monday night? Same thing. Thursday night? You betcha.

Luckily, I not only found a man who was not turned off by my undomestic goddess status, but in some respects, he prefers it. Sure, my husband would probably like to see me tidy the house more than once every two weeks or occasionally bust out the mop, but there is one aspect that he is more than happy I stay away from, and that is cooking.

Whew! I’m not going to lie, I’ve had about every cliché kitchen mishap you will read about in a chick lit novel. I’m twenty-eight but ready to call it quits on trying to find that domestic goddess switch. It’s honestly embarrassing, but crazy frustrating at the same time. Enter...Husband. He not loves cooking and creating in the kitchen, but he’s darn good at it. I would probably either starve or live off fast food if it weren’t for him!

So as we celebrate the release of one of my new favorites read, First & Goal, I asked him to share his favorite recipe with me so I could share it with the rest of you. I give you...Buffalo Chicken Dip!

Directions
Throw everything in a crockpot and turn on high :) My kind of cooking!

He usually starts this about an hour to two hours before we want to eat and voila! So easy you would think I could do it but...I would find a way to mess it up, so it stays with him!


About Samantha March
Samantha March is an author, editor, publisher, blogger, and all around book lover. She runs the popular book/women's lifestyle blog ChickLitPlus, which keeps her bookshelf stocked with the latest reads and up to date on all things health, fitness, fashion, and celebrity related. In 2011 she launched her independent publishing company Marching Ink and has three published novels - Destined to Fail, The Green Ticket and A Questionable Friendship. When she isn't reading, writing, or blogging, you can find her cheering for the Green Bay Packers. Samantha lives in Iowa with her husband and Vizsla puppy.