Happy publication day to Brea Brown and Out of My League, her newest chick lit novel. I was fortunate to read an early draft of this story, and if you're a fan of work-in-progress heroines, quirky friends, and a hunky love interest you want to cheer for on and off of the field, you'll enjoy this fast-paced and laugh-out-loud read.

In honor of her new release, I am pleased to have Brea on the blog to share a little more information about Out of My League along with more about her writing practices. I hope you enjoy getting to know Brea better in this interview. 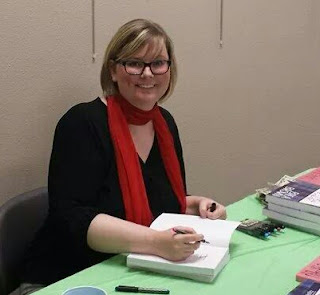 Change the Word: Can you please tell us a little about Out of My League?
Brea Brown: First, thanks for having me and helping to spread the word about Out of My League, the first book in the Underdog Trilogy. I'm excited--and frankly, surprised--it's finally going public. It's one of those books I wrote, then shelved, then would take out every once in a while to remind myself how awful it was, then shelve again. I changed the point of view from third to first, the tense from past to present, and I even switched the entire plot. Then someone wise got me thinking about it again in a whole new way, and the project was reborn. About the only thing that's the same now as it was in the original is the core cast of characters: Maura, Jet, Rae, and Colin. In a way, it's a coming-of-age story (although Maura's a little old for that) about discovering yourself and your place in the world and valuing your self-worth. Which makes it sound really touchy-feely and full of belly button staring, but placed against the backdrop of professional sports and including some fun secondary characters, it's a lot lighter than that.

CTW: How did you develop the character Jet Knox?
BB: *cue blushing* Jet Knox is based on a real NFL quarterback. Well, sort of. Considering I've never met the guy, I guess it's more accurate to say Jet Knox is based on how I imagine a certain real NFL player to be. Of course, after a while, the character took on a personality of his own, and we left the original guy behind. But I still love the inspiration guy (I'll 'fess up now and say it's Matt Cassel, because I'm sure inquiring minds want to know), and I follow his career like we're besties, even though he's long since left my favorite team, the Chiefs.

CTW: When and how did you become a fan of professional football?
BB: I've enjoyed pro football since I was a teenager, and I'd watch the games with my dad, but it hasn't been until recent years that I've become an avid fan. It's more than just about the game, too. Sure, I watch every game my team plays, but the NFL season is also a social affair in our house. We have friends over to watch games, and my slow cooker sees a lot of action. It's fun to cheer with friends. And as long as the Chiefs aren't playing the Cowboys (my husband's team), it's always a lighthearted, good time.

CTW: What does a typical day of watching football look like for you?
BB: Come home from church, get the crock pot going, settle in front of the TV for the first game of the day (usually noon, in my time zone), crack open a beer, and that's pretty much it until there's a break between the afternoon and evening games. Put the littlest kid to bed, then watch about half of the night game. I have to go to bed early, since I get up at 4:30 a.m., so I rarely stay up for the whole prime time game, if my team's not playing. (I'm old.) If my team's playing, I stick with it until the end, consequences--and exhaustion--be damned. 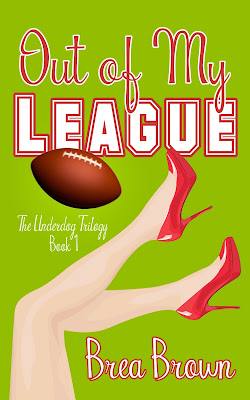 CTW: What's your favorite real life football story? (Can be your own or one you've read/seen.)
BB: I'm actually terrible at remembering this stuff. I love the game and really get into it while I'm watching, but I don't remember big plays or big games after they're over. I do enjoy a great human interest story, though. One of my favorites is Kurt Warner's. The dude lived in his in-laws' basement and worked as a stocker at a local grocery store. Then he played arena football, and drew the attention of the NFL with his impressive performances there. He was signed to the St. Louis Rams, where he was part of "The Greatest Show on Turf," and subsequently also played for the Arizona Cardinals. He's an All-Pro Superbowl champ, a Superbowl MVP, and a Hall of Famer, among other awards and accolades. From stock boy to superstar QB? That's a Hollywood story, for sure!

CTW: This is the first installment of a trilogy. You're no stranger to series--this is your third--how do you keep track of characters/plot continuity/etc. from book to book?
BB: I re-read my own books before writing the next one in the series. It feels narcissistic, but... you do what you have to do. I have a pretty bad memory about most things, so I need frequent refreshers. I also use a writing program that makes it easy to keep my research and background information organized and accessible.

CTW: You written chick lit and lad lit, what other genres might you like to try writing?
BB: I don't plan to write any other genres, but if someone told me I had to try something else, I'd probably choose cozy mysteries. I enjoy reading them, and every time I finish one I like, I think, "I wish I could write something like that!"

CTW: What's the best piece of writing advice you have ever received?
BB: I've received so much! (That's kind of the nature of the business.) But I'd have to say the advice that's stuck with me the longest and that has seen me through many self doubts and bouts of block is to embrace my own voice and deliver the story I'd like to read in a way that only I could deliver it.

CTW: What three fictional characters would you most like to have dinner with and why?
BB: Oh, geez. Only three? I'd love to go all literary and feminist here, but I must stay true to myself and be honest (and shallow). I'd want to have dinner with Mr. Darcy, Atticus Finch, and Mark Darcy. But not all at once. Separately. Like a serial dater. And in modern times, mostly so Mr. Darcy would have to rely on me to help him navigate modern social norms, and I could call him Fitzwilliam. And take a selfie with him. The other two are amazing legal minds (albeit fictional) and would be great conversationalists.

CTW: What's up next for you and your writing career?
BB: Now that I've released Out of My League, I'll move forward in the publishing process with my third and final book of the Nurse Nate Trilogy, Let's Be Friends. Nurse Nate is a reader fave (and I like him, too). I hope to bring the final chapter of his story to readers in Spring 2016.

I'm also in the process of writing a completely new story (a standalone... I think), set in a small New England town. I have no idea when I'll publish that one, but it's been fun to write and meet some new characters.

By this time next year I hope to have the second installment of the Underdog Trilogy ready, although I have only a vague idea of what it will be about.

And... whatever else pops up between now and then. I always have more ideas than time.

Thanks, again, for hosting me. I hope everyone loves Out of My League as much as I loved writing it (eventually... when I finally figured out how to make it work). People can get caught up on all of my other published books, to date, at my website.


About the Book
Maura Richards has a plan for her life—it involves not having a plan. From biding her time at a long-term temp job to ending relationships before they get too serious, Maura’s only commitment is to being noncommittal.

When she meets Jet Knox, the starting quarterback of her beloved hometown football team, she dismisses their encounter as a thrilling brush with celebrity she can drag out at parties for a few years, and nothing more. Jet has other ideas. He’s someone who’s made a living setting—and scoring—goals. Wooing Maura is his latest objective.

Everyone in Maura’s life seems to have an opinion on her relationship with the All-Pro QB, but with so many swirling opinions, rumors, and doubts, Maura must rely on the judgment of the very last person she feels she can trust: herself.

About the Author
Brea Brown is an internationally acclaimed journalist-turned-novelist. She splits her residency between Cayman and London, occasionally vacationing in Australia with family. Her hobbies include counting her stacks of cash, praying for those less fortunate than she is, and drinking fair trade coffees and teas. She’s a hermit, so don’t contact her.

Just kidding! (That person sounds hideous.) The real Brea Brown is the humble Indie author of Out of My League, The Secret Keeper, The Secret Keeper Confined, The Secret Keeper Up All Night, The Secret Keeper Lets Go, The Secret Keeper Fulfilled, Daydreamer, Plain Jayne, Quiet, Please!, Let’s Be Frank, and Let’s Be Real. She lives in Springfield, Missouri, with her three hilarious sons and her amazing husband. Her passions include writing, football, daydreaming, laughing, and not taking anything too seriously. When she’s not doing those things, she hangs out on Facebook and Twitter or blogging as “The Reluctant Blogger.” She loves to hear from readers, so please, take a minute to visit her website, where you can get in touch with her in a variety of ways and view and purchase her entire catalog of books.