For this week's Friday Night Eats post, I invited Out of My League author Brea Brown to share one of her favorite football watch party dishes. 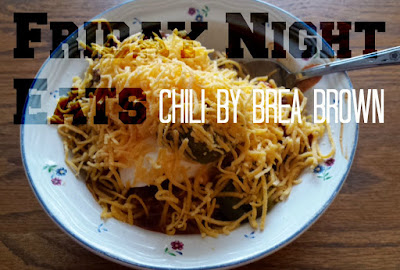 
Hey, all! I'm a dump-and-go kind of girl when it comes to a lot of things in life (hahaha), but most especially when it comes to cooking during football season. There are games to watch, people!!! My slow-cooker gets a ton of use during the season, but this is one dish I actually make on the stove. It's "my" chili. Bit of a misnomer there, because I basically use the recipe on the back of the McCormick's Original Chili Seasoning Packet, but... whatevs. My maiden name is McCormick. Does that count? Plus, I modify the recipe a bit and always make a double batch. Here it is:

Brown ground beef in large skillet. Drain. Mix drained beef, tomato sauce, stewed tomatoes, beans, jalapenos and jalapeno juice in large stock pot. Cover and heat on medium-low, stirring often, until heated through (usually about 40 minutes). Simmer on low for all-day grazing (just make sure you stir occasionally, so it doesn't burn to the bottom of the pan... that's gross). Serve over Fritos, tortilla chips, corn bread (I use a boxed mix), or hot dogs, if you're feeling really frisky.

Sit back and enjoy the game... and the food! Go team! 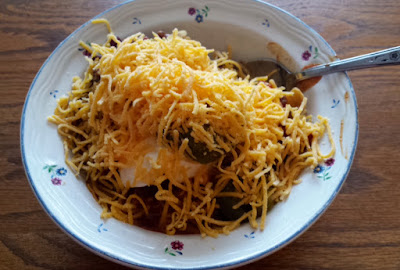 About the Author
Brea Brown is an internationally acclaimed journalist-turned-novelist. She splits her residency between Cayman and London, occasionally vacationing in Australia with family. Her hobbies include counting her stacks of cash, praying for those less fortunate than she is, and drinking fair trade coffees and teas. She’s a hermit, so don’t contact her.

Just kidding! (That person sounds hideous.) The real Brea Brown is the humble Indie author of Out of My League, The Secret Keeper, The Secret Keeper Confined, The Secret Keeper Up All Night, The Secret Keeper Lets Go, The Secret Keeper Fulfilled, Daydreamer, Plain Jayne, Quiet, Please!, Let’s Be Frank, and Let’s Be Real. She lives in Springfield, Missouri, with her three hilarious sons and her amazing husband. Her passions include writing, football, daydreaming, laughing, and not taking anything too seriously. When she’s not doing those things, she hangs out on Facebook and Twitter or blogging as “The Reluctant Blogger.” She loves to hear from readers, so please, take a minute to visit her website, where you can get in touch with her in a variety of ways and view and purchase her entire catalog of books.