wcw: meet natalie from 'what happens at midnight'

Every good love story needs a relatable, but badass heroine to cheer on to victory. This Woman Crush Wednesday, get to know Natalie, the lead character in What Happens at Midnight, now available in All I Want For Christmas from Marching Ink.


As I've previously mentioned, What Happens at Midnight is a story I've been toying with for the past few years, and it finally came together in its current evolution. As such the main character, Natalie, is someone I've put a lot of thought into.

Smart and slightly awkward, a little icy on the surface, though warm underneath, Natalie is kind of a contradiction to herself, which she finds annoying. I had a lot of fun creating her, because like my other characters she has some personal growth to accomplish, but unlike most of my other protagonists to date, she fights it a bit more.

I made Natalie an anthropology grad student turned adjunct professor/part-time curator at a folk art museum as a nod to my day job. While I'm neither of these things, I work alongside talented professors and curators at a museum that celebrates a specific form of folk art. I love my co-workers, and this seemed like a fun way to play tribute to them. I even made one of Ivy's signature drinks the one a couple of my curator co-workers favor. The other is one of my favorites (I'll let you decide which is which, but it's probably not too hard to figure out).

And like Ivy, the story behind her name is pretty easy. Natalie = nativity. Or something like that.

When it comes to casting Natalie, I'm pretty flexible. I'm a big fan of the actresses in the Hallmark movies, so I'd probably be inclined to go with someone I'd like to meet in real life like Katie Leclerc.


Maybe I'm typecasting after seeing her play the fun and adorable, but superbly intellectual Deb in Cloudy with a Chance of Love earlier this year, but if the shoe fits, you snap it up.  I also think she also has the ability to play a Midwest transplant in Austin well.

Let's play a round of My Favorite Things with Natalie...

Favorite Christmas Song: It's really more of a guilty pleasure, but I can't help singing along to Wham!'s "Last Christmas." And great. Now I have it stuck in my head.

Favorite Christmas Movie: My all-time favorite is When Harry Met Sally, which is really more of a New Year's Eve movie, so I guess I'll say Love Actually, too.

Favorite Holiday Treat: Ugh. It might be easier to ask what isn't my favorite holiday treat. I am a certified junk food addict, and I've never met a cookie or cake that I didn't love. But if I had to pick an absolute favorite, I suppose I'd go with those little tree-shaped cakes that come in a box.

Favorite Holiday Drink: I usually stick to my usual Diet Coke or gin and tonic order, but if I'm feeling really festive I might have a Dirty Shirley (that's a 7-Up with grenadine plus vodka if you don't know).

Favorite Holiday Memory: I really enjoyed having my family get together at my grandparents' farm when I was growing up. But probably my favorite memory was spending New Year's Eve huddled up in front of the TV having a movie marathon with my younger brother. He shares my love for rom coms, so it was nice not to have to fight over what to watch--we both wanted the same movies! 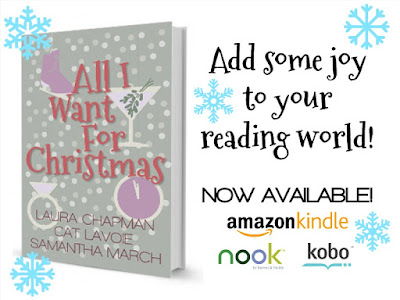 About Making Christmas
While settling into a new career in a new community, Ivy is determined not to let the holiday season pass her by. Enter the grownup advent calendar: twenty-four days of festivities to celebrate Christmas. What begins as a bit of fun turns into a mission to spread cheer when she meets Everett. After learning about his bad Christmas attitude, she invites him to join her quest. Despite his initial reservations, Everett quickly gets caught up in the spirit of the calendar. But when new feelings surface and are impossible to ignore, Everett’s inner curmudgeon threatens to put a damper on the whole experience.