12 days of reading: 'the end game' by kate mccarthy 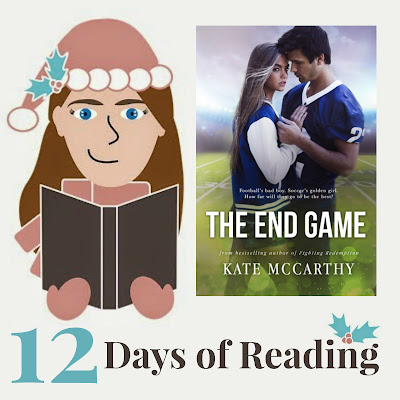 This was the year of football for me. And when I heard about this book, I knew I had to check it out. This romantic and angst-filled new adult fiction was a fast read that was hard to put down (Translation: I took it with me wherever I went, and I read it during every second of downtime I could find--during NaNoWriMo no less.) 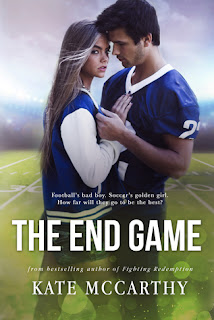 “Professional athletes are pillars of their respective communities. They are heroes in the eyes of boys and girls and are expected to conduct themselves in a manner that positively represents their community.”

The public loves a good scandal. Seeing someone fall from the pinnacle of success makes a great headline. No one knows that better than I do. What started out as a promising career in college football, spiraled into scandal and shame.

But being a hero is easier said then done. Especially when there are those who expected to see the great Brody Madden fail. I craved nothing except being the best—willing to do anything to prove them wrong. But I went too far, and I tried too hard, and it broke me.

“At the time of going to print, Jordan Elliott was unavailable for comment.”

I met Brody Madden in my senior year of college. An Australian native on an international scholarship, I was the female soccer sensation with stars in her eyes and no room for a hotshot wide receiver with a chip on his shoulder.
But a heart bursting with ambition and a driving fire to succeed isn’t made of stone. I became his strength, his obsession, and the greatest love of his life. Only I wasn’t there when he needed me most.

This is a story about love and a game that takes everything. Where the path to glory is paved with sacrifice. Where pressure makes you, or breaks you, and triumph is born in the ashes of failure. Where two people’s end game will change everything.


Filled with a steamy, yet often sweet, romance, this story had a lot going for it if you're a fan of romance. There were laugh (and gasp) out loud moments when you couldn't get through and flip the pages fast enough to find out what happened next.

The new adult work did a great job of capturing the hectic schedule and crazy demands of college athletes along with what it's like to be in that last year of college and the first year post-college. This is often a time already filled with a lot of anxiety about the future while grappling with the present.

The characters were easy to cheer for and support. Both were flawed in intriguing ways, but at their core they were trying to do and be their best under the pressure they faced. Brody and Jordan were well-developed and each carried their own burdens from the past that made their presents and futures extra complicated.

The sports factor in the book was a plus for me, but there wasn't so much of it that you wouldn't be able to follow if you don't know much about football (or in my case, soccer). It worked well, because the author did such a great job of world-building.

If you're looking for a toe-curling romantic escape, I'd highly recommend this one.