12 days of reading: 'going off script' by giuliana rancic 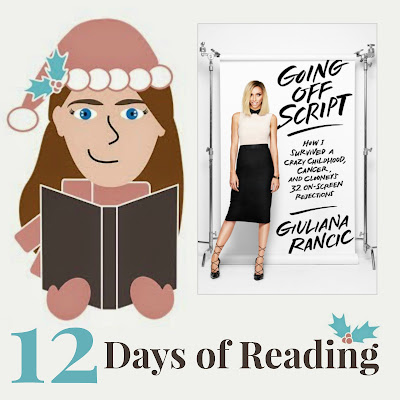 As someone who used to watch E! somewhat obsessively (I've moved on to HGTV in recent years, because I have serious real estate envy, and I gave up the Kardashians several years ago) I've had plenty of exposure to Giuliana Rancic both as a reporter and anchor on E! News and on her own show Giuliana and Bill. So I was definitely interested in checking out her memoirs when they were released this summer. 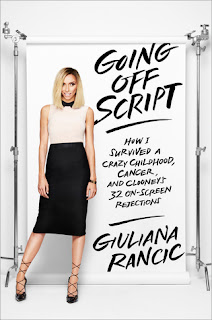 Giuliana Rancic is best known for interviewing A-listers on the red carpet and E! News, skewering their shocking style choices on Fashion Police, and giving viewers a front row seat to her marriage and family life on her reality show, Giuliana & Bill. What fans may not know is that she learned English from Eddie Murphy, got her American citizenship so she could be a beauty queen, and used to have a bad habit of stealing cars for fun.

Giuliana bares this and so much more in her hilarious, warm, and inspiring memoir, Going Off Script. From a young age she dreamed of being a TV anchorwoman but, because of her inclination toward mischief and away from schoolwork, her path to her dream job was far from straight. After a fateful (and mortifying) encounter with the late Senator Ted Kennedy, she learned that Hollywood news was where she belonged. Thankfully for readers, this epiphany led her to a bounty of LA misadventures (featuring notables such as Johnny Depp, Leonardo DiCaprio, and Russell Crowe) and an entertaining behind-the-scenes perspective on what our favorite celebrities are really like.

In spite of her glamorous Hollywood life, however, Giuliana could not escape some rockier times, including her battles with infertility and breast cancer. Here, for the first time, she reveals the whole truth behind her well-publicized struggles, and the highly controversial decisions she had to make. And, of course, at the heart of it all are the two loves of her life who keep her strong through everything, her husband Bill and her son, Duke.

Candid, funny, and poignant, Going Off Script is an autobiography that proves you don’t always have to follow the rules to get the life you’ve always dreamed of.

There were many parts of this memoir that I didn't find too surprising. That Giuliana had worked fiercely to earn her spot at E! and had been willing to take risks. I watched for years, so I saw a lot of that happen. The parts that captured me most were how she candidly described what happened behind the scenes with her fertility struggles, her breast cancer diagnosis and the aftermath of both. Always a pillar of strength on screen and in the media, it was somewhat incredible to hear more about how hard she struggled to maintain that picture of calm when she really felt anything but.

This was a quick read, and one I found particularly interesting, because I've seen so much of Guiliana's career on screen, which is why it sticks out as one of my most notable reads of the year.