Bloggers Note: The traditions surrounding the holiday season are part of what make it so special. In Making Christmas and What Happens at Midnight--my novellas featured in All I Want For Christmas--both celebrate Christmas and New Year's Eve traditions. To spread the merriment of the season, I have invited five writers to share their favorite holiday traditions on the blog this week. Enjoy! 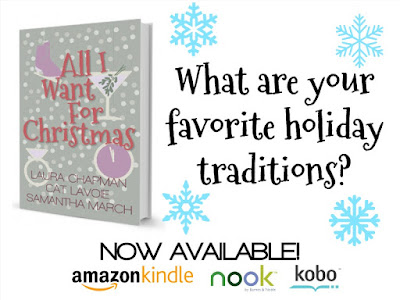 I love the idea of holiday traditions. The Slovak side of my family has been celebrating the same traditions since long before my great grandmother became a goose girl in the tiny village of Blatnitcă. For those of you wondering what in the heck a goose girl is, it is a girl that actually tends geese, not one known for pinching the backsides of others.

On Christmas Eve, my family always sets an extra place at the dinner table for the unseen guest. This place honors a loved one who is with us in spirit and is also available to the stranger who might show up at our door seeking food and shelter. We’ve never physically filled this seat, but I like to think it’s a metaphor for something a bit greater than offering one meal to a stranger.

My other favorite Christmas tradition is the Christmas apple. We take an apple and cut it into as many pieces as we have people sharing our dinner. The person cutting the apple explains if anyone at the table should lose their way mentally, physically or spiritually in the coming year, all they need to do is think back to with whom they shared their Christmas apple and they will find their way. A bit fanciful, perhaps. But it symbolizes hope and possibility and offers comfort for unforeseen strife. I find great comfort in that. To me, Christmas is meaningful beyond the gifts under the tree. It is about offering hope and gratitude for all of my blessings which is why I find both of these traditions so meaningful.

This year, we hope to begin a new tradition. My six-year-old daughter has shown a real interest in the plight of the homeless. She’s only in the first grade so I can’t give her all the reasons that might leave a person without a home. But I can teach her we have a duty to help those less fortunate. In this spirit, we have amassed a total of fifty purses and backpacks that we are filling with things like snacks, water, warm socks, mittens, wet wipes, sanitary supplies, lip balm etc. in hopes of making a small difference to a few in need. We are not solving the homeless problem but we are doing something. My daughter said, “Mommy, if everyone does something, I bet there wouldn’t be any homeless people.” And while that thought is perhaps a bit naïve, I don’t think she’s too far off the mark.


About the Author
While attending the University of Illinois in Chicago, Whitney Dineen was discovered by a local modeling agent and began an unexpected career as a plus-size Ford model. She modeled in New York City before moving to Los Angeles with her husband.

When she wasn’t modeling, she was in the kitchen, baking delights to share with friends. Soon, her friends began asking her to send baskets of her wonderful candies and cookies to business associates, agents and production studios. Word spread like wildfire, and the rest, as they say, is history. Whitney’s sensational creations are still in great demand by her loyal celebrity clientele (www.WhitneysGoodies.com).

During “The Hollywood Years,” Whitney was bitten by the writing bug and started creating characters that are inspired by strong women with a great sense of humor.

In addition to her love of chick-lit, Whitney has also written a series of adventure books for middle readers, the first of which, Wilhelmina and the Willamette Wig Factory.

Whitney and her husband, Jimmy, have recently relocated to the beautiful Pacific Northwest to raise their children, chickens and organic vegetables.

About All I Want For Christmas 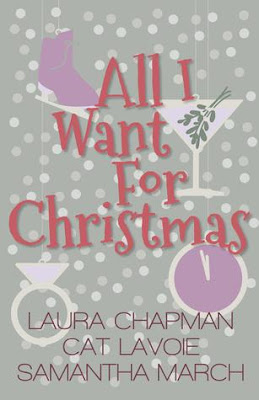 Making Christmas by Laura Chapman
While settling into a new career in a new community, Ivy is determined not to let the holiday season pass her by. Enter the grownup advent calendar: twenty-four days of festivities to celebrate Christmas. What begins as a bit of fun turns into a mission to spread cheer when she meets Everett. After learning about his bad Christmas attitude, she invites him to join her quest. Despite his initial reservations, Everett quickly gets caught up in the spirit of the calendar. But when new feelings surface and are impossible to ignore, Everett’s inner curmudgeon threatens to put a damper on the whole experience.

Nine Ladies Dancing by Cat Lavoie
Casey Ellis is the last person who should be planning her office’s holiday party. Convinced she’s plagued with chronic Christmas bad luck, Casey isn’t interested in tempting fate. But when putting on a party planner hat seems like a good way to get closer to her longtime crush, Casey takes charge—and braces for impact.
When things start to fall apart—just like Casey knew they would—will she run and hide, or will she learn that bad luck can sometimes turn out to be Christmas magic in disguise?

The Christmas Surprise by Samantha March
Juliette Mabry is a happily married stay-at-home wife and mother...until there appears to be trouble brewing in her nearly ten-year marriage. Juliette takes it upon herself to find out if her husband is up to no good, but does she want to know the truth? Everything is revealed on Christmas, and Juliette is in for her biggest Christmas surprise.

What Happens at Midnight by Laura Chapman
Romantic comedy junkie Natalie lives out those fantasies in real life three New Year's Eves in a row when fate throws her together with the same handsome stranger. A heartbreaking turn of events leaves her swearing off of love, forevers, and the holidays (bah humbug). That is until the mystery man from her past reappears years later. Over a holiday season, Natalie struggles to reconcile the whimsical notions of her past with the practical sensibilities she has worked so hard to develop. With the countdown to a new year looming, she must decide whether or not she is willing to give happily ever after another shot.