Today I'm pleased to welcome Caroline Fardig to the blog. In our tradition, we're doing an interview swap to celebrate our respective new releases. You can see my interview on her blog from yesterday here. And I hope you'll join me in congratulating her on the release of Funny Valentine, the latest in her Lizzie Hart series. 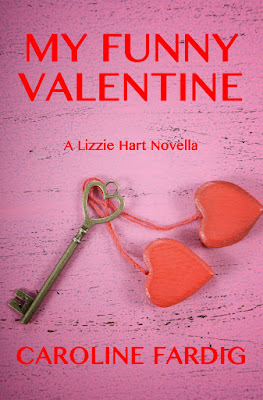 Laura Chapman: What was the first murder mystery you remember reading and what did you most enjoy about it?
Caroline Fardig: I know my first mystery was the first book in the Trixie Belden series, The Secret of the Mansion. Once I read it, I was hooked, and I read every Trixie book I could get my hands on. When I got into high school, I quit reading for pleasure because of the mountain of required reading I had to do. I didn’t pick up another book for fun until I was well into my late twenties, when I discovered chick-lit. Probably the first murder mystery I read as an adult was Size 12 Is Not Fat by Meg Cabot because I loved her chick-lit and decided to give it a try. And then I was a true mystery fan.

LC: Who is your all-time favorite fictional sleuth?
CF: Non-literary? Richard Castle. The show is SO much better this season. The writers have really stepped it up. Literary? Probably Trixie Belden. She’s a classic.

LC: If you could spend a day with any of the characters in your most recent book, who would you choose and what would you do?
CF: I think I’d choose Pete from the Java Jive series.  He’s fun and funny, and I would love to sit down and play some music with him!

LC: Would you consider, or have you already written any books in other genres? If so, which ones?
CF: I’ve written one that’s a forensic procedural. It’s not funny or light-hearted like any of the books I’ve ever published. It was a real challenge to write—the mystery and evidence had to be much more solid because the main character is a CSI and her partner is a homicide detective. It’s not ready for publication yet, but soon, I hope!

LC: If you were planning your dream writing retreat, where would you go, who would you invite, and what would be on the itinerary?
CF: Sounds like fun! I would rent the vacation home my family gets every year on Hilton Head Island, South Carolina. I would invite my long-distance bestie and beta-reader, Karen Franklin; my writer friend, the devil’s advocate with amazing ideas, Jami Deise; and my always inspiring editor, Julia Maguire. On the itinerary, that’s easy—beachside brainstorming sessions, writing and editing while sunbathing in the comfy chaise lounges by the pool, lots of amazing food, and of course, my staple frozen beach cocktail, Sneaky Pete!

Mix together in an empty plastic ice cream tub.  Pour the Sprite last, because you might not have room for all of it.  Freeze overnight and enjoy!

And now for Carolyn to answer her questions...

Were you a big football fan in high school?  A cheerleader, perhaps?
CF: No, way!  I was in the marching band, either carrying around a heavy drum or standing up on the rickety ladder for the drum majors while waving my arms around, trying to keep the band members all playing at the same tempo.  We goofed around during the game and didn’t really watch what was going on.  I’m not much of a football fan.  (Sorry, Laura!)

Fun fact about my high school band days:  I was in the percussion section with Jeremy Spencer, the drummer for the crazy popular metal band, Five Finger Death Punch!  He's a super nice guy, and honestly one of the most talented musicians I've ever had the privilege of playing with.  He could play circles around us in high school.  It wasn't difficult to see that he'd make it big.

Now that you’re grown up, would you prefer to go to a local high school football game, a college football game, or a professional football game?
CF: Probably a high school game, but mostly to watch the band.  Although I will have to say, there’s nothing quite like going to “Friday Night Lights” in a small town.  You see everyone you know there!
I wouldn’t mind going to see a Colts game, though, although if given the choice I’d choose a pro basketball game.  I’m a big Pacers fan, and I’ve been to a few games.  If I lived closer to Indy, I’d have season tickets!

Any big plans for the Super Bowl?
CF: We always have a big party at my house because my husband put a ridiculously large TV in our theater room.  I mostly watch the commercials and the halftime show, drink Sneaky Pete (the recipe is included on one of the other questions), and eat yummy snacks until I’m sick.

Do you have a “soundtrack” for your books?
CF: I have a soundtrack for every book I’ve ever written.  Probably my favorite one is from Death Before Decaf. I’ve listed them in a blog post here.

I’ve written a new song for each Java Jive book, and the sheet music is included with the books. You can find me performing them on my YouTube channel here.

How do you come up with character names?
CF: I normally go to babycenter.com and look up the 100 most popular names from the year my character would have been born.  That way, you won’t end up with a “Grandma Britnee” or a teenager named Bertha.

What can readers expect to see from you in 2016?
CF: I’ve got a lot going on this year!  Of course, there’s the launch of My Funny Valentine today.  Mug Shot (Java Jive #2) comes out April 19th. Wedding Bell Blues (Lizzie Hart #5) will be out sometime this summer, chronicling Lizzie and Blake’s wedding (and of course there’s also going to be murder and mayhem). And finally, in October, A Whole Latte Murder (Java Jive #3) will be released. Whew!  I’m going to be one busy girl!

All Lizzie wants for Valentine’s Day is for her fiancé
NOT to be the prime suspect in a murder investigation.

Is that too much to ask?

Lizzie Hart is finally living the dream.  She’s engaged to the love of her life, Blake Morgan, and more importantly, she hasn’t even given a thought to dead bodies or murder investigations for an entire year.  The only hurdle in Lizzie and Blake’s way to wedded bliss is introducing their polar opposite families to each other at their engagement party.

Blake’s parents have thrown a lavish shindig, but the fun is quickly over when Blake’s brother arrives with an unexpected guest, the woman who left Blake at the altar years ago.  If that weren’t enough drama for one evening, Lizzie and Blake find the town mayor dead and the detectives on the case put Blake at the top of their suspect list.

It’s a race against the clock for Lizzie and Blake to find the real killer before the police decide to lock Blake up and throw away the key.


Find it on Amazon!