finding my center out west


I went on a little adventure this week.

When I'm not working on a novel, binge-watching Netflix, reading a new book, or re-reading a favorite, I am a communications coordinator at a museum. For the past few years, I have managed the museum's social and website presence, along with press releases, advertising, promotional materials, and so on. For that reason (at least I'm assuming), I was asked to present on best practices for social media and websites at a statewide museum conference earlier this week. Not only was I honored to be asked, I was excited about the journey I'd make to and from.

They held the conference in Alliance, which is located in the Nebraska panhandle. I'm a pretty terrible Nebraskan in that I've spent most of my life living in the southeast corner of the state, never venturing far from I-80. This would be my first chance to explore a whole other part of the state, traveling through the legendary Sandhills along the way. Once I gained permission from my boss, I happily agreed to attend.

That was a few months ago.

I'll admit, by the time the trip rolled around on Monday, I wasn't particularly excited anymore. I've been in an off mood the past couple of months. A lot of the anxiety issues—and the reactionary lows—I've dealt with in the past have resurfaced lately. More often than not, I feel like there's a pile of bricks on my chest and a haze of fog around my brain. Like I can't draw a proper breath or a thought. It's a claustrophobia of sorts. Add in the troubles I've had sleeping, exacerbated by seasonal allergies, and I'm always tired and drained.

The once exciting prospect of driving back and forth across the wide openness of my state in a compact car by myself had lost some of its appeal.

The once virtually fearless traveler inside of me was gone. In her place I found a pessimistic worrier, who I don't particularly like, but can't seem to shake.

With a night of those worries turning over and over in my mind, I didn't exactly bounce out of bed ready to go. In fact I dragged my heels as I checked my overnight bag, washed my hair, and picked up the vehicle I was taking for the drive. I hugged the kittens good-bye, plugged my iPhone into the charger and speakers, and eventually pulled out of the driveway.

I hadn't been on the interstate more than fifteen minutes when my mood shifted. With every mile that passed by, the worries slipped away. It was like brick after brick of pressure crumbled from my chest. The beauty of the farmland turning green after winter rejuvenated me. My inner adventurer woke up. Maybe it was the purple wildflowers coming into bloom. Maybe it was the empty openness of my surroundings. Maybe it was the freedom of the road. Whatever it was, after shifting between high-strung and depletion, I found some balance.

We live in a beautiful, interesting world. It can also be ugly, scary, unkind, and a lot of other bad things. Unfortunately, all too often, I get hung up on those elements. But while I drove across Nebraska, I was able to ignore those parts. I could focus on the good, the simple. The scenery that could have been brushstrokes on a canvas if I wasn't living in it.

During my drive, I saw landmarks, like part of the Nebraska National Forest. (Yeah, we have one. In two districts, actually. This one is the Bessey Ranger District. Don't let the fact that it was created in the middle of the Great Plains make you think any less of it.)

I was able to make observations about my surroundings, which resulted in witty, charming, and on-the-nose responses from my little sister.

And I even made it to Carhenge, a true Nebraska treasure. 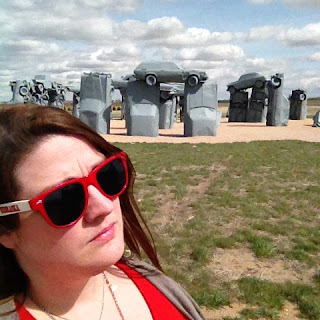 Though I'd planned to listen to an audiobook during my 12-plus hours on the road, I ended up rocking out to my playlists for Hard Hats and Doormats and Queen of the League Book Three (which will be published this upcoming football season, I hope). Back in my true road warrior days, I made a regular practice of playing American Idol and singing along to whatever I had playing on the radio. I gave my vocal chords a workout—and likely would have scared anyone who witnessed my in-car karaoke spectacle had there been anyone around.

As a nod to my railroad background, I paid attention to the trains I saw on the mainline track that follows Highway 2. Of the six I saw while I was heading west, five were full east-bound coal cars (which wasn't unexpected, given that coal from Wyoming heads east along that route) and one was an manifest train with several international cars on it. I saw even more trains on the way back. All but two were westbound empty coal trains. (Again, no surprise.) The two heading east were full coal trains. This maybe doesn't make sense to you—I've maybe even lost a few who didn't sign up for this post to learn about trains. But there was something kind of comforting about looking at those trains rolling past—or alongside—me, and understanding them. It was like catching up with an old acquaintance. Though times have changed, we are still a lot the same.

I also played a rousing session of windmill. If you aren't familiar, it's pretty easy. Whenever you spot a windmill, you stop whatever you're doing and shout "windmill." It's best when played in pairs or groups—because you always want to be the first one to say it. Even though I was on my own, I still cracked up whenever I interrupted my concert to shout and point "windmill!"

On the drive home, I conducted a bit of a social experiment, or rather an observation. It started when, a few miles out of Alliance, I passed an oncoming truck. The driver, a gentleman in a cowboy hat, gave me the rancher hello. Again, if you aren't familiar, it's where you lift one or two fingers on the steering wheel in greeting to the vehicles you cross. Living in a city like Lincoln—and being years removed from these regular sightings when I drove all over Texas—I found myself charmed by the gesture. When the next vehicle I crossed—an SUV with a young man in a ball cap—gave me the rancher wave too, I was intrigued. So I kept a running tally of who I passed between Alliance and Mullen, located about 90 minutes away. During that time, I met about 20 vehicles. None of the sedans, and none of the women waved. Of the remaining—which accounted for the majority—all but two men driving trucks or SUVs gave the wave. And all of them were wearing cowboy hats and ball caps. (The two no waves were bare-headed, and one was bald.)

The waving stopped around Mullen, and that was okay. I was too distracted by the rolling hills and the beautiful male pheasant that chose to step in front of my car at last-minute, which left me a little devastated.

While playing my games and workshopping future karaoke numbers, I had a lot of time to think. Rather than focus on the issues that have been plaguing my mind the past couple of months, I thought about future stories I'd like to tell. I thought about scenes I could write into Queen of the League Book Three. I thought about other adventures I'd like to take, places I'd like to see, life I'd like to experience. I dreamed and I schemed, and I took a lot of deep breaths. While thinking about what I might do in the future, I somehow managed to stay fully engaged in my present.

By the time I pulled back into Lincoln late Tuesday night, I was even more tired than when I left. I also felt more like myself than I have in a long time. I didn't come out of the experience with any answers or solutions. My fears and pressures were waiting for me. At least I had that brief reprieve. I could remember that those often scary waves of anxiety and depression don't last forever. That has to count for something.

But I made a few memories. They might not be particularly newsworthy or notable to anyone else. Still, they belong to me. They're part of me. That counts for everything.