Blogger's Note: Today Susan Sands, author of Love, Alabama, is stopping for an interview as part of her Chick Lit Plus blog tour. Be sure to check out the other stops and enter the giveaway using the Rafflecopter below. 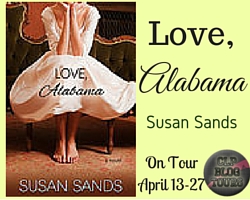 Change the Word: Please give us the elevator pitch on your book:
Susan Sands: Emma Laroux’s a fallen Southern beauty queen whose past is barely whispered about in her small town.  But the secrets and lies surrounding her scandal still haunt her, and something about Matthew Pope may hold the answers...if only she could put her finger on it.

Matthew Pope wonders what awful karmic thing he’s done to land him in Podunk, Alabama. But when he sees Emma Laroux again after all this time, he knows he’s still the only one who holds the key to unlocking the truth of her past…

Will a shared moment in time ten years ago threaten the best thing that’s every happened to them – each other? 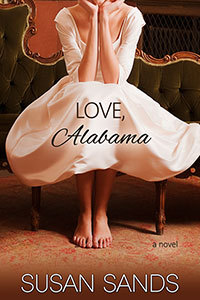 CTW: What inspired you to tell this story?
SS: I told Emma’s younger sister, Cammie’s story in my first book, Again, Alabama. I received lots of reader interest in Emma. They wanted to know what awful thing had happened to her that was so bad no one dared whisper about it in a small town. When I began the first book and wrote that statement, I’d had no idea what it could have been, I just knew it would have to be something really bad.

CTW: What is your favorite part about this book?
SS: I appreciate Emma’s desire to protect everyone around her. She runs a successful business, jumps in when anyone in the family needs a hand, and doesn’t sit around feeling sorry for herself. I love it when her family decides it’s time they do what’s necessary to help her find true happiness.

CTW: If you could swap places with one of your characters for one day, who would it be, and what would be the first thing you do?
SS: I think it would be Cammie Laroux because she is a television chef. I would have her mad cooking skills and be on television for a day. I would also be married to her hot husband, Grey Harrison. The first thing I would do is whip up her prize-winning pecan pie—because I could.

CTW: Where would you most like to go for a week-long writing retreat?
SS: I often head up to Lake Burton in the North Georgia mountains. It’s only about an hour and a half away but so beautiful and peaceful. I get so much accomplished and it renews my motivation and gives my creativity a much-needed boost.

CTW: What is the best piece of writing advice you've ever received?
SS: It’s the same advice that I pass on to all struggling writers who feel like it’s never going to happen. I know it sounds cliché, but don’t give up. Keep learning, keep writing, keep networking and meeting other writers. The balance of timing, talent and luck will fall your way eventually. Don’t take rejection personally because it isn’t meant to hurt you, it’s meant to better your work.

CTW: What are your top three all-time favorite books that you've read?
SS: That’s the toughest question so far. Hmm…I remember reading Great Expectations in high school and it really stuck with me. So tragic. Jane Austen’s Pride and Prejudice is one of my all-time faves. I’ve read so many over the years. My latest favorite story is The Nightingale by Kristin Hannah, mainly because I was so cold and hungry, and my feet were killing me by the end. She really took me on her journey. It was powerful and I felt the pain of the characters. But if I have to be honest, I adore women’s fiction and romance of all sub-genres. Eloisa James, Kristan Higgins, Karen White, Luanne Rice. That’s where it’s at for me.

CTW: What's up next for you and your writing career?
SS: Well, I’m working on the third Alabama book, of course. It will be Ben and Sabine’s story. And I’m writing the first in a new series set in Louisiana, which is actually a complete scratch re-write of my very fist novel that was never published. I loved the setting and characters in that story so much, I had to dig them and give them their shot.

Thanks so much for hosting me today! I’m so thrilled to be here!I love to connect with readers on social media!


About the Book
Emma Laroux’s a fallen Southern beauty queen whose past is barely whispered about in her small town. But the secrets and lies surrounding her scandal still haunt her, and something about Matthew Pope may hold the answers...if only she could put her finger on it.

Matthew Pope wonders what awful karmic thing he’s done to land him in Podunk, Alabama. But when he sees Emma Laroux again after all this time, he knows he’s still the only one who holds the key to unlocking the truth of her past…

Will a shared moment in time ten years ago threaten the best thing that’s ever happened to them – each other? 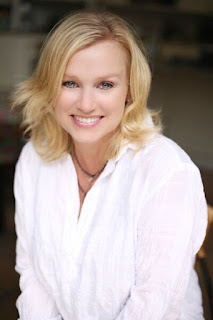 Susan Sands grew up in a tiny Southern town in Northwest Louisiana near the Texas border. She graduated from Northwestern State University in Natchitoches, Louisiana, during the filming of Steel Magnolias on her campus. There’s no more Southern, small town claim to fame than that.

Her characters and setting are pulled from those very Southern, small towns and open spaces, where the air is clean and the words are often spoken with more syllables than necessary, y’all.

Her lifelong love of reading and the realization that her children were growing up and would eventually move on spurred her to try her hand at writing. Susan’s two novels, Again, Alabama, and Love, Alabama, are currently available both in digital format and in print from all online retailers.

Susan lives with her dentist husband and three nearly grown children in Johns Creek, GA. She is a member of the Georgia Romance Writers and the Romance Writers of America.

She loves connecting with readers and can be found at all the fun places: