chatting with the chicks of chick lit

Ha ha ha ha welcome, welcome everyone to Chatting With the Chicks of Chick Lit. I’m your host, Chuck Lottateeth, and I am so thrilled to be able to introduce you to some of the most fascinating characters in literature today. I’m talking about the leading ladies of Chick Lit—those enchanting, romantic, darling, sexy, sweet, funny, headstrong—and, let’s face it, sometimes downright frustrating—modern women who headline this fabulously fun genre. I'm sure you're going to love getting the skinny on these “novel” heroines, and who knows? You might just find your new BFF on the pages of one of these books!

Without further ado, please put your hands together and show some love for today's guest . . .

Harper Duquaine joins us from Laura Chapman's fun and flirty Queen of the League series, which tells the story of one woman's journey into the world of Fantasy Football. Along the way she finds love, friendship, and one of the best quarterbacks a person could ever want on his or her team. A native of Wisconsin, Harper now resides in Lincoln, Nebraska, where she works as an office manager for a car dealership. When she isn't busy scouting new talent for her fantasy football teams or setting her weekly lineups, she enjoys crocheting, baking, spending time with her brothers and friends, and watching really bad TV.

With that, let's begin the interview.

Chuck Lottateeth: If you were a shoe, what kind of shoe would you be?
Harper: Oh, that's a first-time question for me. I guess I'd say I am a stylish, but sturdy, pair of boots. I'd like to think I have a put together look (or at least I try to fake it till I make it), but I'm also hardworking and dependable. And wow. All of that sounds super braggy. Can we redo that or are we live? Let's just say stylish, but sturdy boots, because those are my favorite shoes to wear.

CL: What are the three items you would absolutely need to have with you if you were shipwrecked on a desert island?
H: The practical person in me would say a switchblade, or something useful like that, so I could attempt to make some kind of shelter and find sustenance. The more whimsical side of me would want to bring a crocheting hook so I could maybe create a line of scarves and potholders created out of palm tree leaves and the like. And for my third item, I'm going to take a giant vat of sunscreen. I'm a delicate flower, and I'd rather not get a sunburn.

CL: If you had only $15 to spend, what would be the perfect date? $50? $5,000?
H: I'm really pretty low-key about my dates, so $15 is usually the price range. I'd say we'd use part of the money to put gas in the car and use the rest to make a picnic of hot cocoa and peanut butter and jelly sandwiches to take for a night out of star-gazing. At the $50 range, we'd probably go to one of my favorite restaurants, which is a local pub. That kind of money would cover drinks, meals, and maybe even a couple of desserts for the table. At $5,000, I'd buy the best tickets I could find for a Bon Jovi concert, a hotel to stay the night, plane tickets, dinners out, and new outfits for myself and my significant other. I think we'd still possibly have some leftover money from that, which I'd give to my SO, because he's a lot more generous with his money than I am, and he'd use it for a good cause.

CL: If you could be the heroine in any chick flick, who would it be and why?
H: My first instinct is to say Renee Zellweger's character, Dorothy, in Jerry Maguire, because of the football connection, the fact that she's gorgeous, and our mutual willingness to support the people we love and stay positive despite our past romantic failures. But I don't know if that's completely accurate. I'm also not sure if that's really answering the question, because it is who I would want to be if I could be any heroine, right? I don't know if I'd want to be Dorothy, because she has it kind of rough. So, I'll say... Giselle from Enchanted, because she's a princess, she can get animals to do her work for her, she has a great attitude and style, and she has great options for male suitors. I mean, she really can't go wrong with Patrick Dempsey or James Marsden, right? 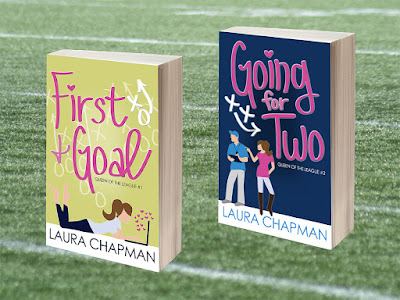 Don't forget: This week, to celebrate International Chick Lit Month and #ChickLit May, the first two books in my Queen of the League chick lit series are on sale for 99 cents each!