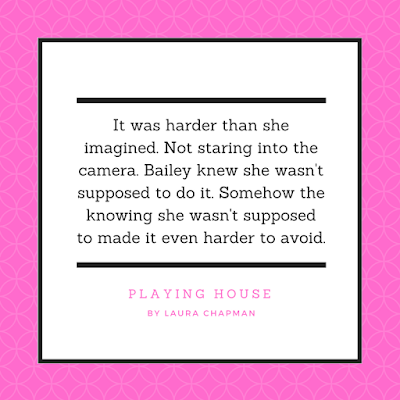 I'm super excited (and nervous). In exactly one week, my new novel, Playing House, will be in your hands to read. Ack. It's the romantic story I came up with after a weekend of serious HGTV binge-watching. I hope you love it.

In the meantime, here's an excerpt of the book to give you a taste. In this scene, Bailey is on-set for her first real day of filming. Even though she's supposed to mostly be a background player, she's given a chance to see how she does on camera.

“Be yourself.” Renee squeezed her shoulder. “Just be your pithy self and you’ll be great.”

What was that even supposed to mean? Bailey would have asked, but Renee had already turned to chase after Waverly. She probably wanted to keep Waverly’s call to ten minutes if possible.

Well, fine. Bailey could figure out what she meant by “pithy” on her own. She’d start by googling “pithy.” She was so absorbed in reading the definition—“concise and forcefully expressive,” which so wasn’t her—she almost didn’t notice Wilder staring at her.

Is the Pope Catholic? Does the sun rise in the east and set in the west? Is Ryan Gosling the hottest thing to ever come out of Canada? Or maybe it’s Ryan Reynolds. It’s definitely one of the Ryans, though. (Sorry, not sorry, Waverly.)

Rather than give an outright answer and admit she was terrified, she gave a half shrug.

Pithy. She probably needed to come up with some clever, but not show-stealing, lines to say on camera. She could still feel his eyes on her, even though she tried ignoring him. It was easier not looking into the camera lens than it was to pretend she didn’t notice how well he looked with a tool belt slung around his hips.

It was particularly difficult with him standing there with his thumbs hooked into his distressed jean pockets.

“Want to run through a couple of potential lines?”

Her eyes flew to his. “Really?”

“Sure. It’ll be fun. What do you have worked out already?”

“Well . . .” She took a deep, calming breath through her nose and pulled her shoulders back far enough to do her mama proud. “This fireplace actually has a lot of potential.” She ran her free hand over the mantle the same way Wilder had moments earlier. “All it needs is some sprucing up.”

Wilder nodded encouragingly. “But isn’t it an ugly-as-sin monstrosity that should be gutted along with the kitchen?”

“Structurally, it’s in great shape.” Kneeling, she motioned for him to follow her lead. “It just needs a good sweeping. Wait till you see what we found behind this gross facade.”

She pulled off one of the pieces to reveal an original late nineteenth-century hearth.

Wilder let out an appropriate whistle. “Hot damn.” And impressively, he sounded legitimately thrilled and tickled considering he and Felix were the ones who’d discovered the hidden treasure during their preliminary walk-through.

“We can definitely work with this. We’ll build a new mantle.”

“Maybe a solid piece of native cedar. We could put some chunky candlesticks on it.” Her heart fluttered imagining how good that would actually look. “Create an even cozier setting.”

He nodded. “Good, good. I like that. And we’ll clean up the original brick.”

The more they painted the picture, the more she wanted to bring it to life. “It’ll be like stepping into good old Texas—stunning.”

“Definitely stunning.” His eyes lifted to hers, and her breath caught. He winked, and she was pretty sure she’d never breathe again. “That wasn’t so bad, was it?”

She blinked and cleared the lump out of her throat. “That was it?”

“Yep.” Rising, he offered his hand. Pulling her up, he gave a gentle squeeze before releasing it. “You did great.”

“I did?” She couldn’t seem capable of more than parroting small phrases.
“You were light and breezy—definitely pithy.” 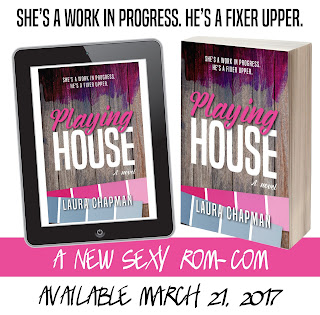 Bailey Meredith has had it. As an assistant at a prestigious interior design firm, she’s tired of making coffee and filing invoices. She’ll do just about anything to get out from under the paperwork and into the field for real experience. Then she sees an ad for a job that seems too good to be true.

Wilder Aldrich knew she would be perfect for the crew the moment he saw her. His hit home improvement show only hired the best, and Bailey had potential written all over her. It isn’t just her imaginative creativity and unmatched work ethic that grabs his attention. There’s just something about her.

With chemistry on screen, it’s only a matter of time before sparks fly behind the scenes as well. But with Bailey’s jaded views on romance and a big secret that could destroy Wilder and everyone he cares about are either of them willing to risk it all for love?

*** Let's keep in touch! You can find out what's going on in my world between blog posts by following my daily adventures on Facebook, Twitter, and Instagram. You can subscribe to my monthly newsletter here. You can also find out more about my books by visiting my website, www.laurachapmanbooks.com. Whew. ***
Posted by Laura Chapman