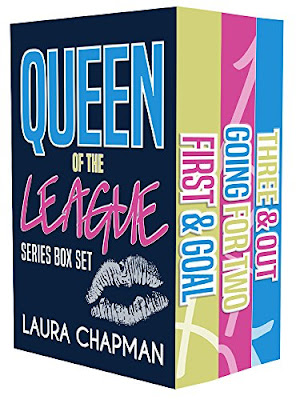 It's that time of year: football season is upon us. College ball starts Labor Day weekend and the NFL returns to regular season the following week. (Bonus, that means fall is just around the corner, which means pumpkins, apples, boots, and scarves, and that makes this girl who hates humidity happy.) But football is almost here.

For the past few years, that's meant researching and drafting a fantasy football team. Joining my then-office's fantasy football league five years ago was kind of life-changing. For one, it made me a little obsessed with players and their stats. It made watching non-Packers games more interesting. And it inspired the Queen of the League series. Once I had the idea, it gave fantasy football even more meaning. For the next three years, I juggled two leagues while I wrote First & Goal, Going for Two, and Three & Out. I stuck with one another year as I prepared to release the final story in the trilogy during the season.

But this summer, when the email came from my former co-worker and long-time commissioner asking if I wanted to do the league again... I retired. Honestly, it's something I've been thinking about doing for a while. It's hard to pay curate a stellar team while writing and marketing books and working a full-time job. Never mind being a cat mother and having a social life.

It's hard to have it all.

Truth is, my heart wasn't in the game the past couple years. Maybe it was coming so close to winning--and losing--it in year two and never coming close again. I'm a sore enough loser it's possible. Maybe it really was being my feeling too busy. (But we're all busy, so boo to that.) But I knew it was time to move on. Kind of like I've moved on to another series in my writing.

Still, fantasy football will always have a special place in my heart. Especially because it brought me Harper, Brook, J.J., and the rest of the Mega Ballerz and friends. 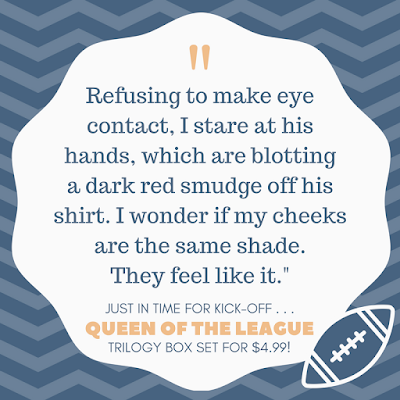 What do we have here? I pause in the doorway to admire the tall, broad-shouldered man standing at the kitchen sink. My gaze travels down the back of his blue polo shirt, which is tucked into a pair of khakis. I gulp and close my mouth to keep my tongue from rolling out. This could be my self-imposed dry spell talking, but I never realized a man’s back could be so appealing in a polo. And the khakis . . .

He leans forward, and I can’t help watching the way the material stretches across his butt.

“Harper, you made it.” My back, and the one I’m ogling, stiffen in response to Wade’s greeting. Oblivious to the tension in the room, he steps around me to reach into the fridge. The man at the sink turns slowly. Refusing to make eye contact, I stare at his hands, which are blotting a dark red smudge off his shirt. I wonder if my cheeks are the same shade. They feel like it.

Raising a beer to his lips, Wade nods at the other person in the room. “Brook, have you met our newest league member?” He nudges me in the ribs, hard enough I almost drop the tray. Steadying myself, I set the beer and treats on the counter and face the source of my shame.

Wiping my sweaty palms on the sides of my jeans, I pull my shoulders back, straighten my spine, and step forward. “I’m Harper Duquaine,” I say with as much confidence as I can muster. “Thanks for having me. Over for the draft,” I hurriedly add because I can’t seem to keep myself quiet. “And in the league, in general.”

Slinging the towel over his shoulder, he takes my offered hand. “Brook MacLaughlin.”

I gain the courage to meet his gaze. Light blue eyes pop from his suntanned face. A loose lock of gold-streaked hair falls across his forehead, and a light smattering of day-old whiskers covers his chiseled chin. I’m not sure if I gasp, but I’ve definitely lost my breath. He may not have J.J.’s striking GQ handsomeness, but the effect is similar. Like someone’s punched me in the gut.

He opens his mouth to speak but lets out a short breath, almost like a laugh. His lips pull into a tight, brief grin instead. Like me, he’s seemingly at a loss for words. Only, based on the flush darkening his high cheekbones, I’d guess he’s embarrassed for me.

The reminder of my bad manners moments earlier forces me to release his hand and step back. “Sorry to interrupt you. The other guy—your roommate—told me to bring the food here. To the kitchen.”

“Oh, no problem.” The side of his mouth curves up shyly. “I was trying to save my shirt.” He gestures at the dark smudge bleeding into the fabric. “It’s probably a lost cause, but I figured . . .”

“What did the little monsters get on you today?” J.J. asks, stepping into the kitchen to grab a beer. Seeing me, he winks, sending another jolt to my belly. At this rate, I might spontaneously combust here in the kitchen. “Jelly or juice?”

“Strawberry jam.” For my benefit Brook adds, “My nieces brought me lunch today. They tend to get a little enthusiastic about peanut butter and jelly. My clothes sometimes get in the way.”

“How old are they? Your nieces?

“Marley is four and Ellery is two.” His eyes crinkle around the edges. “They’re a handful, but they’re worth the extra laundry.”

“I bet.” I take a shaky breath to calm my still fluttering stomach. “My nephew is three. He usually leaves a path of destruction behind him. I figured I was safe taking him to Burger King last week . . .”

He winces in sympathy. “It’s amazing what kids can do with french fries and ketchup.”

“Tell me about it. I was in shock.” Which is an understatement. I’d nearly cried when he’d created his own version of Starry Night on one of the tables. “I tried to clean up, but the fifteen-year-old running the register told me it’d be better if we left.”

“You know . . .” Brook strokes his chin, tapping his lips three times with his index finger. “We probably shouldn’t ever put the three of them in a room together. They’d probably launch World War III.”

“Or at least cause an incident with international repercussions.”

“Can you imagine the headlines?”

“The press would have a field day.”

Apparently done with kid talk, J.J. clears his throat. “Did you say you brought food? Someone specifically mentioned treats.”

I blink, thrown off by the abrupt change in subject. “Yes, I—”

“Nice,” he interrupts, peeling back the plastic wrap on the platter, snagging two bars. “I love these things. My mom used to make them for me.” Eyeing the beer, he grabs one and tucks it under his arm with the other bottle. “This is one of my favorite brews. Nicely done, Harper.”

He walks off, followed soon by Wade, who also takes a bar. Left alone, I fill the silence by offering Brook a beer. He shakes his head. “I have to grade some papers and go over film tonight. I’m a teacher. And coach,” he adds quickly. “A football coach. I try not to drink when I have to work.”

“Makes sense to me. I had an English teacher in high school who I’m pretty sure graded our papers while drinking a bottle of wine. You could always tell whose paper she’d done last because the writing was illegible and the student almost always got an A.”
He chuckles. “Maybe I should try her method sometime. Essays about Colonial America can be a bit dry.”

He nods. “I have two sessions this semester—we do block scheduling—and this year’s freshman class is a doozy.”

“I’ve already had to call four parents about excessive cell phone use.” He shakes his head and reaches a hand up to massage the back of his neck. “And I’m pretty sure some of the students started a meme of my ass with a photo someone snapped of me bent over to pick up papers.”

My eyes widen. Is he making a jab at me? “Have you figured out who did it?”

“No, and to be honest, I’d rather they poke fun at me than any of their classmates.” He drops his hand again. “I’m a grown-up. I can handle the teasing.”

My belly flips. I blindly fumble for the pan of Rice Krispies treats and thrust them under his nose. “Want one?”

“We should probably get in there.”

He blinks but doesn’t say anything. He chews thoughtfully and nods. “Go ahead. I’ll be in shortly.” He points to his shirt. “I should take care of this and change into something more appropriate.”

I set the pan down and grab one of my beers. I keep my gait smooth on my way out the door. Part of me wishes I had the moves to try swaying my hips, but I’d better not. I have zero game and would only make a mess of it.

Besides, I shouldn’t be flirting with anyone here. They’re the competition. I also have a team to draft and talent to scout. There’s no time for hunky distractions. 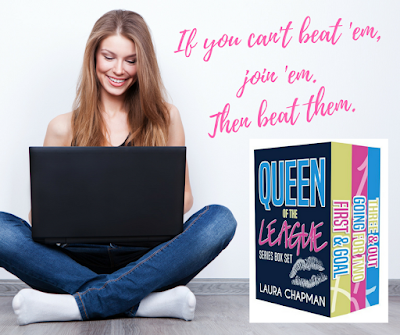 Check out the rest of First & Goal, book one in the Queen of the League series, for only 99 cents on ebook. Or, as of today, you can download the whole series in one collection for $4.99.