let's hear it for new york

Somehow, I managed to wake up the first time my alarm went off. That's not unusual most days, but last Monday it sounded at 3:30 a.m., which is a little (okay, a lot) before I usually get up. In hindsight it was probably easy because I was already running on fumes. As I've mentioned, work has been crazy busy for the past few months with a big build-up recently. Getting four hours of sleep wasn't my favorite thing in the world, but it wasn't totally unusual.

Thanks to my early wake-up, I had time to load my luggage in the car, put on some make-up, and even snuggle with the kittens. I was out the door and on the road before my last-ditch "OMG-you-have-to-get-moving" alarm rang.

I put on the "My Favorite Murder" podcast and made the one-hour drive to Omaha to catch a flight. I was feeling pretty good about myself and the timing and took it as an omen for how this quick business trip would go. That peppiness started to fade after I pulled into a long-term parking spot and spent the next fifteen minutes waiting for a shuttle bus to come take me to the airport. It never came. No problem. I could walk. Ignoring the signs that said "no pedestrian traffic" on account of the construction, I raced to the terminal.

By then, the text messages from my co-worker had started to flood my phone. They included phrases like "longest security line I've ever seen here" and "ridiculous."

To paraphrase Han Solo, I had a bad feeling about this.

It only worsened as I stood in line and came to appreciate just how slow-moving security was. Back in my heavy traveling days, when I was leaving on adventures a couple times a month, I knew I could get through security and board my early morning flight in under an hour with time to spare for picking up coffee and breakfast.

No such luck this time. Around me, passengers lamented that the final boarding call had bene made for the flights. Behind me a gentleman asked if he could cut me, because he needed to board the plane to New York. So did the young woman behind him. And me.

I could see my now-empty gate from the line as perspiration built on my back and neck. So much for the make-up and nice outfit I'd selected for an afternoon of meetings in New York City. It was hard to worry too much about that. I figured I'd be lucky if I made it on board. With minutes to go until I  knew those doors would close, I texted my co-worker:

"I don't think I'll make it. Have a safe trip and I'll get there when I can."

I'd never missed a flight because of tardiness. It appeared that streak was about to change.

At last I handed over my driver's license and scanned the boarding pass pulled up on my phone. I spared a glance at the gate and saw the doors were open. If I could just get through the scanners, I might make it. My hope slipped away each time the person going through in front of me had to step back to empty out her bottle of water. To ditch her styrofoam coffee cup. To remove a belt. To pull an iPad out of her bag. The TSA agent chastised me for putting my shoes in a bin instead of directly on the belt. I narrowly kept it together. Was he really giving me grief for holding things up? On a rule not universally enforced and one that had no signage on display? Only my fear of authority kept me from rolling my eyes or talking back. (In hindsight, it had probably been a crappy day for him. And it wasn't even 5:45 a.m. He had to get his kicks somewhere, I suppose.)

Somehow, I made it through the scanners with no troubles, slipped on my problem-causing shoes, and shoved my laptop and toiletries into my bag and made it to the gate a few minutes before they closed the door. As I settled into my seat, I shared a glance of relief with the two people who had been in line behind me. They'd also just made it.

By this point, I was sweaty, hangry, and still reeling from the near miss that I couldn't find much delight in hearing we were actually pushing back early and would land a few minutes ahead of schedule. Oh, joy. I turned on one of the podcasts I'd downloaded and opened a book about a then-unsolved murder.

I guess I really had murder on my mind by then. 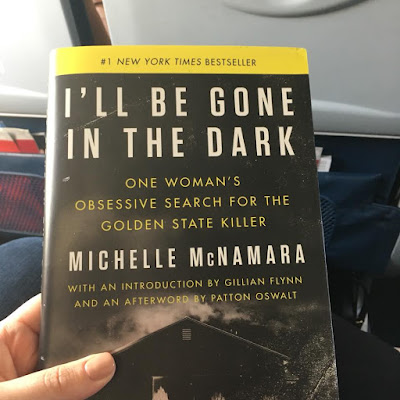 By the time our plane landed at LaGaurdia, I was engrossed in solving murders. And . . . I'd burned through most of my phone's battery only to discover I'd forgotten my charger. Not the end of the world, but when you're already in a mood from weeks of hard/busy work, a near-missed flight, and a hungry tummy, you're just looking for reasons to be upset.

It didn't last long, though. It's hard to hold onto a grudge when you climb into a cab headed for New York City.

And you really can't beat that view driving over the East River. 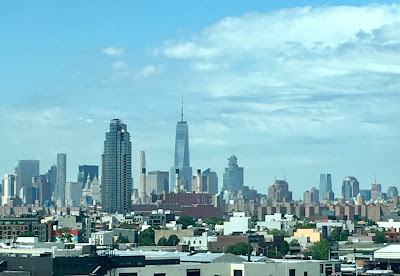 While most of my short business trip was spent in the East Hamptons, I did have an afternoon and evening in the city. It wasn't much time in Manhattan, but we made the most of it between our meetings. 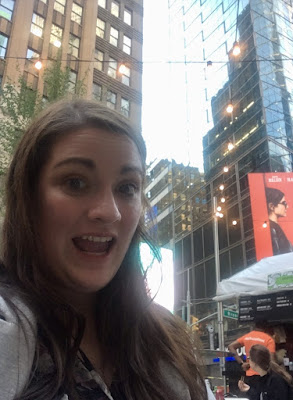 After hitting up an Apple store to buy a new charger, navigating the subway, and working, there was our stroll through Central Park . . . 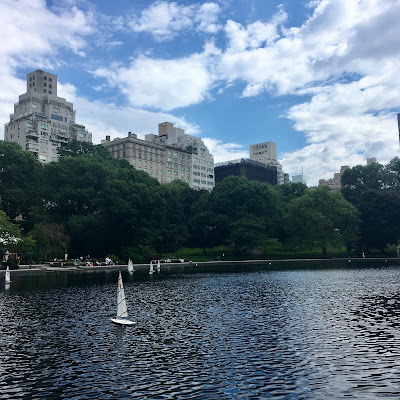 Happy hour at a local bar, where I found one of my new favorite drinks: an apple margarita. It seemed fitting with it being summer and my being in the Big Apple. 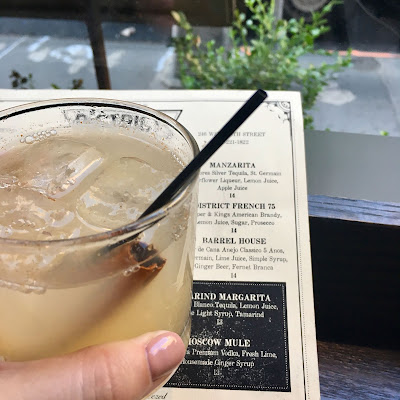 Dinner from vendors in Bryant Park. I had three mix-and-match tacos: black beans with guacamole, fish, and falafel. They were amazing. 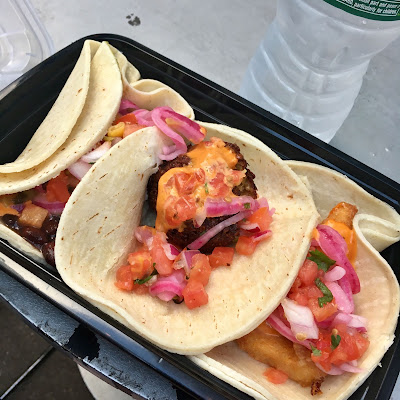 And on our walk to pick-up our luggage before hitting the road for the East Hamptons, we witnessed a sunset in Manhattan. While it wasn't the exact date of this summer's Manhattanhenge, we were only a few days off, which gave us this pretty incredible view. 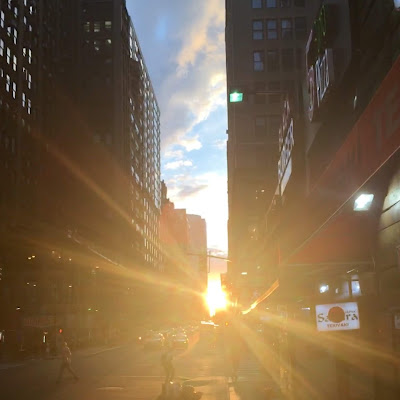 I hope I'll have a chance to go back sooner than later to explore more of the city and seem my friends. But this was not bad for a quick afternoon in New York City. And even though I was wiped by the time we made it to our residence for the week, it went a lot better than it had started.