the books not written

On Saturday evening, I finished up the last of the major work events/projects that had been on my plate from January through . . . well, Saturday. I left the museum feeling relieved, tired and a little giddy. I mean, it's not like we're never going to be busy again. It's not like we're going to suddenly stop doing anything new. But the past few months were exceptionally full and busy.

So I went into nesting mode.

I made a list of all the little projects around the house I've been meaning to get to when I could just have a full uninterrupted day. I started at the top of my list: reorganize my home office and closet. Both have been a hot mess for the better part of a year and there was no time like the present.

I spent the afternoon opening boxes and bags to neatly organize notebooks, reams of paper and my ever-growing collection of pens and paper. Not to mention sorting through my craft tubs. (Oh, yes, I have craft tubs.)

Eventually I reached a pile of worn-out folders and threadbare envelopes of all sizes. Think thirty-year-old cold case files sitting in a dusty filing cabinet in the back of the evidence room at a police station. Had a stumbled upon old family documents? The first draft of an undiscovered Willa Cather manuscript? Important state secrets that had somehow found their way into the back of a bedroom-turned office closet?

Or, maybe I had finally found a bunch of the papers from college I'd sworn I recycled years ago rather than move from apartment to house to apartment to wherever I was living at the time.

I flipped the top folder open and found this: 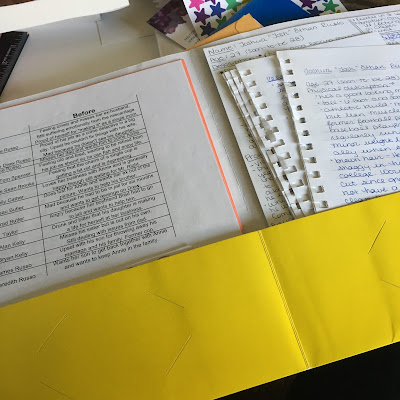 These are the character sketches, outline and general notes for a romantic suspense novel I attempted to write the summer after college. At the time, I had a freshly printed bachelor's of journalism degree, an entry-level news internship at a paper in Illinois and a couple of writing workshops to my name. I felt immensely qualified to not only write a book, but one involving mystery, corruption and a second-chance romance.

Five chapters in, I realized I was writing all back story. And I actually had no idea how to get these characters from the first page to the last. So the notes went into a folder, which was placed in a box and eventually stuffed on a shelf in my closet.

I opened up the next. 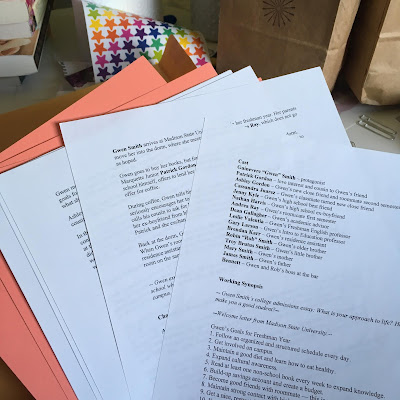 Well looky here. These are the character sketches and outline for the very first full-length novel I ever attempted to plot and write. I started developing it the summer after freshmen year of college, back when I thought a character with a first name of "Guinevere" and a last name of "Smith" somehow balanced out. I tinkered with this story about a college freshman finding romance off and on my sophomore year of college, but I grew bored.

Little did I know, if I'd just stuck with this one, maybe I could have been on the cutting edge of new adult romances. 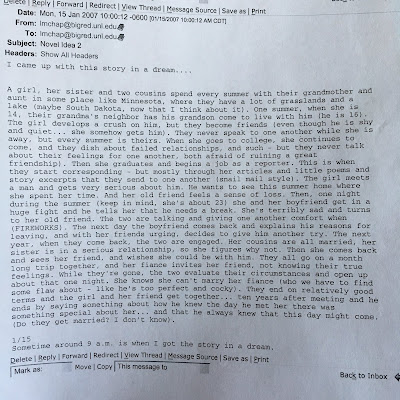 A story idea I'd emailed myself early the second semester my Junior year of college. I still email myself story ideas and notes. I just don't remember doing it this early. Or thinking of this one at all.

And look! The story idea came to me in a dream! How very Stephenie Meyer writing Twilight of me!

There were more. Like the tentative timeline and outline for a cozy mystery I started writing when I was 24. 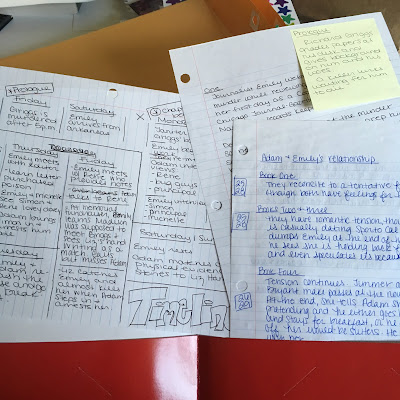 A relationship chart and character sketches for another romantic suspense set in Brazil. 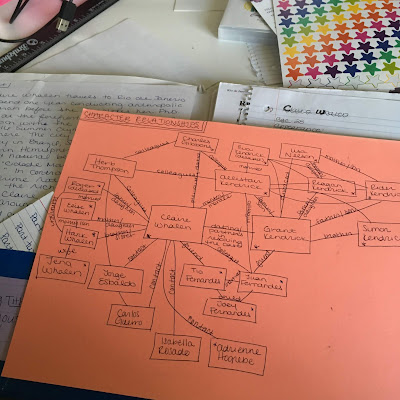 For every book or story I've written, there are at least two or three that died in development, pre-production or production. But I still held onto the work in case I someday came back. Then I filed them away and forgot about them.

I'll never say never, but I'm pretty sure these stories are going to stay forgotten and unfinished. Not because they're awful or stupid. But I've moved on. And I have even more story ideas still in that pre-development phase.

Looking through this box at my old ideas and notes, I'm struck by a few things. First, while my process has changed some, I still use a lot of the same brainstorming devices. Second, I often get "stuck at the same point in the process. And I'm not entirely sure what happens to push me over that bump for some stories and not for others. Third, I may never write all of the stories running through my head.

That last revelation sounds so sinister, but it's oddly comforting to me. It's nice to know that I've always had ideas coming to me, even if they don't stick. It gives me hope that maybe they'll never fun out. It's nice job security for a writer.