teaser tuesday: counting on you

Blogger's Note: For this Teaser Tuesday, check out a scene from my latest release, "Counting on You." In this scene, Haleigh has agreed to let Ian set her up with a dating profile on his new app, XO On Demand. We will have a read along of this book in my Reader Group on Facebook beginning February 1. 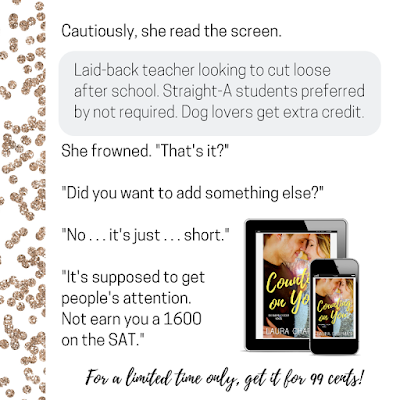 She must be crazy. While she’d cut someone out of her life for calling her that, it was the only logical explanation Haleigh could come up with as she downloaded a beta copy of XO On Demand onto her phone.

Only the day before she’d been set up on her first blind date ever. Now, here she was, giving online dating a shot.

What a difference a day made.

She’d been completely serious about never considering online dating. She knew people who had tried it—and successfully. Not that she judged, but it seemed like such a direct and confrontational way to meet someone. By putting your profile out there, you were proclaiming to the world that you were on the prowl.

In another five minutes, she’d be one of those people. After she finished the setup and the survey Ian assured her would be fun, she’d have her first string of potential dates. Brought to her through the magic of technology.

All because she couldn’t stand the idea of her classmates judging her.

If she was one of her own students, she’d tell them it didn’t matter. That after high school no one cared what people thought. And she’d be lying.

The download completed, and the app opened on her screen. She followed Ian’s directions to create her account. His play-by-play wasn’t entirely necessary. The directions were pretty self-explanatory, but he seemed eager to help. It eased her nerves. Some.

“This is where it gets interesting.” Ian clicked a button, taking her to the next page. “Instead of having you answer fifty questions about who you are and what you want, we’ve created a quiz of sorts. Would you rather go camping or stay in a five-star hotel? Which breakfast looks most appetizing? What—”

“I’ve got it.” She flashed him a grin to soften her tone, but she needed to concentrate.
There were so many questions. None of them were too complicated or earth-shattering, but she had to choose correctly. Her future lineup of men depended on it. 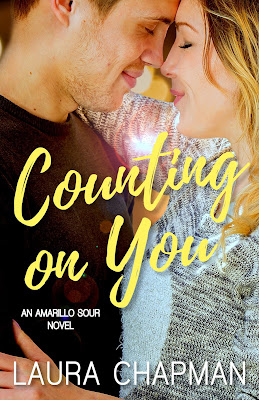 Question One: Which of these dishes would you order right now?

She selected a basket of chicken strips with fries.

“Barbecue.” He shook his head. “I knew there had to be something wrong with you.”

At least his teasing made this a little less nerve-racking. “You guys aren’t going to use these answers and sell my information to restaurants now, are you?”

“Of course not.” But he tapped his chin thoughtfully. “It isn’t a bad idea, though.”

Question Two: Where would you rather spend a Saturday afternoon?

She didn’t even have to consider this one. She picked “Binge-watching TV in my bed.”

“You heard that one last night,” she reminded him. “Doctor Who. But I’ve been known to do a Lord of the Rings or Star Wars marathon from time to time”

“Which episode is your favorite?”

“Five.” That’s what everyone always said. There was probably something about the bad knocking down the good at the end of the Empire Strikes Back that made a person seem deep. After Greg had explained that to her years ago, she’d made it her customary response.

Only when she was being totally honest, she’d admit she liked Return of the Jedi best. She loved those Ewoks.

“Okay, you’re forgiven for the honey mustard.” Ian drank from the pint that had been delivered a few moments before. “But I’ll admit, I’ve never seen Doctor Who.”

She tore herself away from the phone. “Seriously?”

He lifted a shoulder. “It’s not because I’m opposed to it. I just haven’t watched.”

She muttered about how sad it was that some people never truly lived as she returned her attention to the quiz. It took her longer than five minutes—particularly with Ian chiming in on almost every question—but eventually, she reached the end.

Are you ready to get matched?

If she was answering, “Do you want a date to your reunion so Nina and your former classmates can shut up and Greg can suck it?” the answer would be yes. Absolutely. With bells on. As for whether or not she actually wanted to date anyone . . . that was more complicated.

Was she taking the whole thing too far? It was one thing when it was an abstract idea, but this would involve real people. And not just a random guy a co-worker set her up with. She’d be auditioning men who were online looking for love. Or a hookup. They weren’t looking for drama and baggage.

Then she remembered one of the comments freshly added to the reunion event page today. “What’s the high-low on Haleigh showing up at all?”

She clicked “find me a date.” 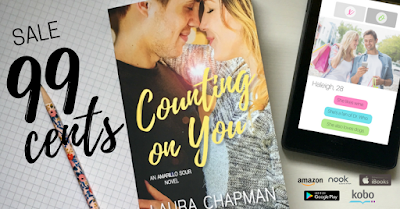 ***Let's take this relationship to the next level. Join my Facebook Reader Group for in-depth discussion on everything from books to our favorite binge-watches. Follow me on Facebook, Instagram, and Twitter for day-to-day shenanigans. Subscribe to my monthly newsletter AND score a free copy of one of my books as my thanks to you. You can also find me on  Amazon and BookBub.***
Posted by Laura Chapman

Email ThisBlogThis!Share to TwitterShare to FacebookShare to Pinterest
Labels: amarillo sour, counting on you, teaser