#teasertuesday: an excerpt from 'playing house' 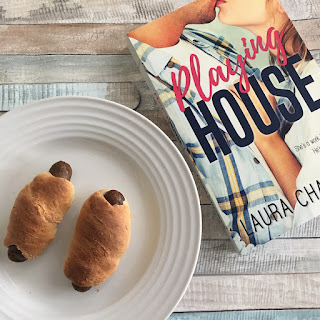 The past two days had been nothing short of spectacular. Even though Bailey knew this was temporary, she’d probably replay some of those moments forever.

See? Thinking like that proved she needed a hard reality check from her sister. Otherwise, she was setting herself up for disappointment.

Armed with two cups of coffee and sausage kolaches, she was about to ring the bell when the front door swung open. Her hand froze over the buzzer and she came face-to-face with a man she’d never seen in her life.

She stepped back and double-checked the numbers over the door in case she’d lost her mind and landed on a stranger’s front porch. Nope. She was in the right place. Who the heck was this guy? What was he doing on her sister’s porch with his fly undone and shirt half-buttoned? And why wasn’t he Felix? Not that Bailey wanted to see Felix’s washboard abs. Or lack of them—she hadn’t really considered what he was working with under those work shirts. But he was the one who should be doing the walk of shame from her sister’s house at this hour. Not some stranger.

Her heart sank. Had something happened between Paige and Felix? Wilder said Felix was making a trip back to Houston for the weekend to visit his parents. The last she’d heard they were going strong. If everything was fine, then . . .

Paige suddenly appeared behind Mr. Six-Pack. Wrapped in a robe, her messy hair was a tell-tale sign she’d just pulled herself out of bed. She offered a welcoming grin even as Bailey’s eyes turned to slits.

“What a nice surprise.” Her eyes traveled to Bailey’s hands, and her grin grew even brighter. “You brought breakfast.”

“Enough for two. Sorry.” Bailey directed a quick glare at her sister’s guest, who was still standing around half dressed. “I didn’t realize there would be a third.”

Check back on Thursday to get my recipe for Texas-Style Kolaches!

She’s a work in progress, and he’s a fixer upper.
Sparks fly when Bailey meets Wilder on the set of a home-improvement TV show.