excerpt of 'go for love'

Enjoy this (unedited) extended preview of "Go for Love," my new novella appearing in Love in Charge: Powerful Women, Powerful Love, a limited time collection to benefit the GLSEN Omaha Chapter. Now available for pre-order on Amazon. Yours to read 9/1/19. 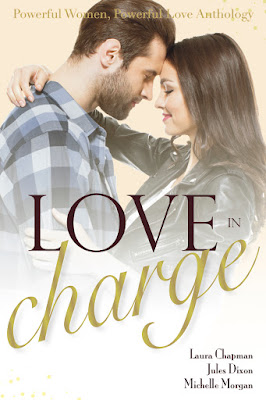 Beck was still placing his order when Sarah sprinted into the pizza parlor. Pausing just a moment to take a breath, she pulled back her shoulders and stalked toward the counter. As he reached for his wallet, she plopped her credit card down on the counter.

“I’ll take a slice of the black truffle and gorgonzola and a bottle of Shiner. I’ve got his order too.”

Jaw slack, Beck gaped. The college student behind the counter darted a nervous glance his way, but took her credit card and rang up the order. She scribbled her name and a healthy tip on the receipt.

Turning at last to face him, she one again registered the disbelief and confusion on his face. She couldn’t blame him. She had, after all, just crashed his dinner. It was presumptuous. Rude, even. But at this moment, it was absolutely necessary. Hopefully Emily Post—and her mother—would forgive the rudeness.

His Adam’s apple bobbed as he swallowed. “Yeah, okay.”

Recovered, Beck strode toward a corner table near the back of the restaurant leaving her to follow. Sitting down, he gestured for her to take the seat opposite him.

As far as attempts to level the playing field and restore a balance of power went, it was halfway effective. And, if she was completely honest with herself, she respected that.

Biting back a grin, she took the offered seat and rested her forearms on the table.

“Since we already covered the niceties earlier, do you mind if we skip them now and get right into it?”

One of his eyebrows quivered. “By all means.”

“Great.” She leaned forward. “Here’s the deal. I know you need money to start your own business.”

His eyes narrowed into slits. “Did Maisie tell you that?”

She didn’t figure he needed an answer. It was obvious to anyone who her inside source was on this tidbit of information. “I’m prepared to offer you the exact amount you need. Plus—” she held up a hand before he could interrupt, “an additional bonus for every day you finish before the launch.”

She threw out a number. This time his eyes widened. He leaned back in his chair, studying her closely as if to suss out whether or not she was bluffing.

“Look,” she said, not wanting to let this deal get away from her. “I know neither of us particularly wants to hop into bed together again—so to speak.”

She cringed inwardly at her choice of terms. She’d always hated how sexual business lingo could be. There wasn’t time to dwell right now.

“But we both need something. I need a reliable server before my launch. You need cash. Don’t you think we can put the past behind us for a few days?”

Beck nodded slowly. She could practically see him making a list of pros and cons in his head. She’d done the same herself only five minutes earlier. Hopefully, like her, he’d come to the conclusion that the pros far outweighed the cons in this instance. “It’ll take a lot of hours and muscle,” he said at last. “I’m not sure it’s even possible on such a tight timeframe.”

“So you’re worried you’re not up for it?” She clucked her tongue. “You never used to be afraid of getting your hands dirty or a challenge.”

His eyes narrowed. “I’m not afraid.”

Letting out a rude grunt, he ran his hand over his cropped hair. Not for the first time that day, she longed to reach out and straighten the freshly tousled locks. Or, better still, to make them even messier.

“I already have work scheduled during business hours. It will take a lot of overtime.”

“Like I said, I’ll make it worth your while.”

“And I suppose you’ll be watching over my shoulder the whole time.”

Annoyance flared in her fast and strong. “I’m not a micromanager.”

He held up his hands, wordlessly calling for a truce.

“I’m a week away from launch, and I have a lot riding on this. Of course I’ll be around.”

He gave a short nod. “You won’t interfere?”

“Not unless it’s absolutely necessary.”

They fell quiet again, each silently studying each other like they were embroiled in an epic staring contest or a game of chicken.

She ignored the thrill that bubbled in her chest. Surely it was just relief that this last obstacle standing in the way of GO’s success would soon be behind her.

“We start fresh today. As far as either of us is concerned, we’ve just met.”

She understood what he meant. Hard as it would be to pretend that they hadn’t once enjoyed a relationship that had burned hot and fast, he was right. They couldn’t revisit it and keep this partnership professional.

Sarah offered her hand. “We have a deal.”

Beck accepted it and shook. She tried to ignore the jolt of pleasure his firm hand against hers sent down her back. “When do we start?” he asked.

“How’s tomorrow?” Just like he’d wanted. See, she could compromise.

His lips curved up and he released her hand. “Whatever you say boss.”


About the Collection
When this woman steps into a room, heads turn and people listen. Whether she's commanding a new business venture, coaching a collegiate football team, or diagnosing and healing people, she's focused, influential, and passionate, and she's not about to apologize for it.

But there is loneliness and fear she can't ignore, and questions soon follow. Is a second chance meant to be, when the first was a disaster? Is her distrust of all men warranted when only one has truly ever hurt her? Can she set aside an age difference to find love?

Most of all...when a man who is everything she's never realized she wanted is right in front of her, will she be ready for the biggest undertaking of her life?

Lose yourself in these three novellas of powerful women learning that sometimes love is the one in charge.

Email ThisBlogThis!Share to TwitterShare to FacebookShare to Pinterest
Labels: excerpt, Go for Love