excerpt of 'let it be me'

Great news! “Let It Be Me,” the latest rom-com from award-winning author Laura Chapman (that’s me), will be released on Monday! And to celebrate the occasion, I’m giving you an extended teaser. 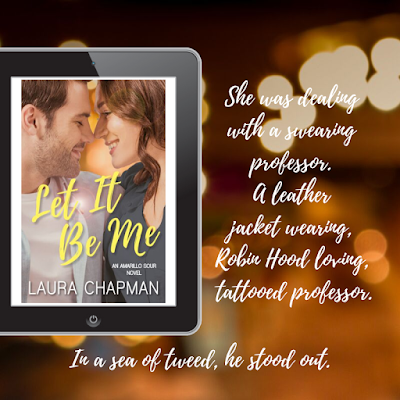 
Who says history is boring?

Professor James Mitchell has a rock star reputation. With a waitlist for all his classes, a best-selling book, and the requisite leather jacket, the university and publisher are eager to capitalize on this British sensation. But after his girlfriend leaves him for another man, James goes from rising scholar to spiraling bad boy. Forget contracts and tenure, James wants out—of his job, his book deal, and, better still, the country. He’s well on his way when his boss’s daughter walks into his favorite bar . . .

Aspiring filmmaker Ali Ferguson-Day doesn’t scare easily. She’s been given the means to make a film of her own—on the condition she tames the professor. As the daughter of a famed documentarian and a renowned historian, she’s more than ready to step out of her parents’ shadows and shine on her own. She won’t let anyone—not even an unexpected charmer—get in her way.


Using her social media stalking skills, Ali tracked the professor to a coffee shop near campus. Her time at The G Spot hadn’t been a total waste, it seemed. And he, apparently, didn’t know that a man on the run shouldn’t post a photo of his latte on Instagram.

Standing just inside the entrance, she was once again transported to her college days. The coffee shop had been one of her favorite spots to study. As the professor had discovered, they made the best lattes in town.

Maybe she could grab one before she dragged James back to his office.

A sudden movement out of the corner of her eye caught her attention. With his messenger bag slung over his shoulder, James was crouched to the ground behind an oversized ficus.

It was a good thing he was handsome, because Professor Mitchell didn’t seem to know much about strategy. That was particularly shocking for someone who was supposedly an expert in medieval battles.

Folding her arms, Ali arched an eyebrow and waited for the professor to give up his act. Slowly rising to his full height, he gripped his to-go cup and crossed the room.

She held up her phone to show the picture he’d posted. His gaze darkened. “I believe I told you your services weren’t required.” His voice was awfully posh for a man who’d been hiding behind a plastic plant only moments before.

“That’s not for you or me to decide.” She shifted from one foot to the other, trying to keep the annoyance out of her voice. “You don’t have to fight me on this. I’m really good at what I do.”

“So am I.” On that note, James stepped around her and slipped out the door. He timed it perfectly so she had to wait a few crucial seconds for a pack of students to meander through the entrance.

Letting out a frustrated grunt, Ali chased after him.

“I don’t judge you for falling behind schedule,” she said once she’d caught up to him halfway down the block. “Sometimes the creative process goes through a few problems.”

“My creative process is just fine.” He pressed a key fob in his pocket, unlocking the door to a silver Prius.

Oh no. He was not getting away again. Not without giving her a chance. Running behind his car, she stood a few feet away with her arms spread wide.

He poked his head out the window. “You might want to move.”

She shook her head and extended her arms even wider. “Just give me five minutes.”

With one more pointed stare, James disappeared back into the car. The red brake lights flashed on, and the car inched back. Surely, he wasn’t going to—Ali jumped out of the way a few seconds before the bumper came into contact with her knee.

Jaw open, she gaped as he pulled away with a little wave.

“You’re insane,” she shouted after him.

Didn’t he realize he could have killed her?The man was even more trouble than her mother had said. Not to be deterred, she pulled out her phone and punched in a text message.

I will find you.

A moment later, she had her response.

Watch a trailer for the book

Pre-Order 'Let It Be Me'