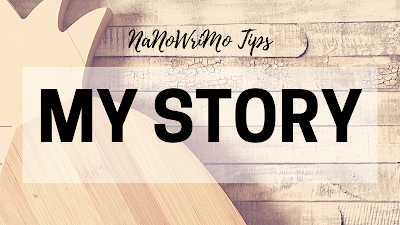 I was scrolling through my Facebook feed when I saw a post from one of my friends. It read something like "Day 1 of National Novel Writing Month done with more than 3,000 words written."

It was November 1, 2010. I was sitting in a one-bedroom apartment just off the Interstate north of Downtown Lincoln and still adjusting to my life back in Nebraska. After living in Texas for more than a year, it was weird being back sooner than I expected and working in the office I'd figured would be in my rearview window. I was also about five years into the routine of telling people that I'd write a book someday. Like most other writers, I'd started and stopped at least four or five manuscripts after getting a few thousand words into them.

But reading that message from a former classmate gave me pause. Why wasn't I writing my book? So and so was. And she'd never talked about writing as much as I had. Maybe it was time for me to stop saying someday and to make it so.

Using my work-issued iPhone (I couldn't afford Internet back in those days) I signed up for an account on the NaNoWriMo website and scribbled out a quick outline. The next day, I boarded a plane back to Houston for work, but this time I occupied my free time by working on a story about a young woman far from home, working in an industry she didn't understand. I related to a lot of what my main character was going through. Only, her life was far more exciting. It was like writing fan fiction for my own life. One where I took control of my professional life. Where I didn't let fear keep me back from pursuing love.

The words didn't come completely easily, but they came. And even though I was always a little behind where the NaNoWriMo tracker said I should be, I kept going. Through another business trip and a major cold, I wrote and wrote. On November 30, with the assist from a friend (because, still, no Internet) I submitted my still-in-progress manuscript to NaNoWriMo and received my winner certificate.

I'd done it. I'd written 50,000 words. I still had a long ways to go on that manuscript (in terms of writing and editing and querying, though those last two aspects were far away). But I'd proven I could set a writing goal and fulfill it.

When November 2011 rolled around, I was better prepared. I'd outlined my book a few weeks before November, and I went into the month with a couple of friends joining me on the journey. I finished two days ahead of schedule.

Every year, it became easier. I reached the goal earlier and earlier in the month, padding my word count even more in the days that followed. There was never a question of whether or not I'd participate in NaNoWriMo. It was more a question of "what will I write this year?" I'd found a way of writing that spoke to me. As someone who is goal oriented and competitive--and someone who worries about perfection while full-well understanding it's unattainable--going this approach just worked.

That carefree attitude changed in November 2016. That was the year I wasn't sure I'd finish NaNoWriMo with 50,000 words under my belt. Caught up in the frenzy of everything happening in the real world at the time, I couldn't quite slip back into the fictional world I was creating. It was a pity. As someone who had participated in--and completed--NaNoWriMo every year since 2010, I was disappointed my streak would break. I decided it was okay if I didn't, though. The real world needed attention, and my story could wait.

Then, I woke up five days before the end of November with another story on my heart. And a resolve that even though it felt like the world around me was falling apart, my words and my story still did matter. It didn't diminish my feelings about reality and vice versa. Besides, if I let others stop me from doing something I loved, if I let them silence me, wasn't I just giving them what they wanted?

More resolved than ever, I went into a writing frenzy, filling the page with the words on my heart. I never did finish that story--it was too raw and unfocused. Three years later, I still haven't been able to open and look at it with an objective eye to see if it's worth saving. Yet somehow, at 9 p.m. on November 30, I managed to cross the 50,000-word mark and earn my NaNoWriMo winner badge.

I'd done it. I'd kept my streak alive. It was in that moment I did some math and realized that I was seven years into a NaNoWriMo winner streak. If I could keep my resolve up for three more years, I could call it an even 10. I liked the sound of that.

My NaNoWriMo 2017 writing journey wasn't flawless, but it was still easier than 2016. The next year --2018--was almost as challenging as 2016. Once again, my world was falling apart. This time it was my personal life collapsing as someone I loved and one of my biggest cheerleaders faced a terminal diagnosis. Only this time, I never considered stopping. As someone who'd always eagerly followed my writing progress, I knew I'd be letting her down as well if I let anything stop me from reaching my goal. It wasn't easy. But I still reached the 50,000-word mark with a few days to go. And, you know what? Those words didn't totally suck. You can actually read them (or a version of them at least) in Let It Be Me, which was released yesterday.

All of that brings us to now: Year 10. Just seeing that on my screen right now is empowering. It's also kind of crazy and has me in a bit of an existential tizzy. (How did I get to be so old? Where did the time go? Who am I? What is the meaning of life? What is the airspeed velocity of an unladen swallow?)

Rather than dwell too much on what it means to go into my 10th consecutive year of participating in (and hopefully winning) NaNoWriMo, I figure I should be constructive and productive with that milestone. So, for the rest of this month here--and on my social media platforms--I'm going to share some of the lessons I've learned during the past nine years and share some of my tips for succeeding. As a disclaimer, these are entirely my own processes and you are free to take and leave them as they work (or don't) for you and your own writing journey.

I love NaNoWriMo and appreciate what it has done for me as a writer. Fact: I'm not sure I'd be a published author without it. Or, at least, it would've taken me a lot longer to reach that point. If you're someone participating for the first time, signing up after a long gap, or a fellow frequent writer, welcome. I hope you're able to pull something helpful from all of this. And I wish you the best of luck.

Look for new posts on Tuesdays and Thursdays right here on Change the Word. You can also look for daily tips on my Facebook, Twitter, and Instagram accounts (with weekly videos posted to Facebook and IG TV on Wednesdays).

With that, let the countdown to NaNoWriMo begin!